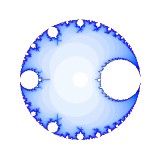 I'm an evolutionary biologist with a sideline in Mac software. Many years ago I was a software engineer at Apple, Berkeley Systems (makers of the After Dark screensaver), and various other places. I wrote a couple of things that some people have heard of, like Solarian II (a video game), Satori (a screensaver), and Lunatic Fringe (a video game inside a screensaver). Nowadays I mostly write evolutionary simulations, although I try to keep a few shareware and freeware products at Stick Software (http://www.sticksoftware.com) limping along in my spare time.

This user hasn't posted yet.