Touchpad gestures and holding keys does not work

I am facing very weird problem on which I cannot find solution. One time touchpad gestures stopped working along with keyboard keys holding. Touchpad is moving the cursor but nothing more. When I am holding keyboard keys they appear only once, although in my setting it is set up to repeat keys.

These are issues reported over the last few days. Not all of these issues have been verified as caused by Kernel 4.13.0-26.

The Intel Microcode Update 2018-01-08 to address speculative execution branching security holes broke some systems. This effected many Ubuntu systems from January 8th to January 21st. On January 22, 2018 Ubuntu released an update that puts back older Microcode from 2017-07-07.

If you experienced problems with updates, reinstalled Ubuntu and turned off updates between 2018-01-08 and 2018-01-22 you may want to try Ubuntu automatic updates again. Check the link in the preceding paragraph for more information.

How to find out your kernel version

Since the terminal is open already, get your Ubuntu release using:

To close the terminal use:

When you boot your computer at the Grub menu select Advanced Options then select an older kernel to see if you problems go away. If so keep regularly updating to newer kernels as they are offered in Ubuntu LTS and check them until one works. Make sure you don't run sudo apt auto-remove which could make your working older kernel disappear.

With the introduction of Kernel 4.13.0-26 Ubuntu LTS update around January 11, 2018 and old bug from September 2017 resurfaced. The developer recommended trying Kernel 4.14 (described in the next session) but a quicker fix seems to be disabling PEAQ WMI Hotkeys.

As discussed in Unix & Linux the first step is to ensure it is loaded:

Note the last line above

If you have it loaded you can disable it with an xinput command but we'll use the work around suggestion in the bug report above:

Using your favourite sudo editor, edit /etc/modprobe.d/blacklist.conf. At the end of the file insert two lines:

Save the file and exit.

According to this Debian Bug Report a short term fix is to use:

Try this in the terminal and then test your Touchpad.

If the temporary fix works then edit the file /etc/rc.local with sudo powers. Add the following lines:

From now on when you reboot the fix will be permanent.

Note this hasn't been tested yet when resuming from suspend. If you have any problems in that department post a comment below.

There are instances going back to August 2017 where the touchpad didn't work that is unrelated to Kernel 4.13.0-26 automatic Ubuntu LTS upgrade but one of the answers still require Kernel 4.14 anyway: Touchpad not detected on Lenovo Ideapad 320 with Kubuntu 17.04.

On January 10, 2018 the latest stable mainline kernel was 4.14.13. If you choose to manually install it you should know: 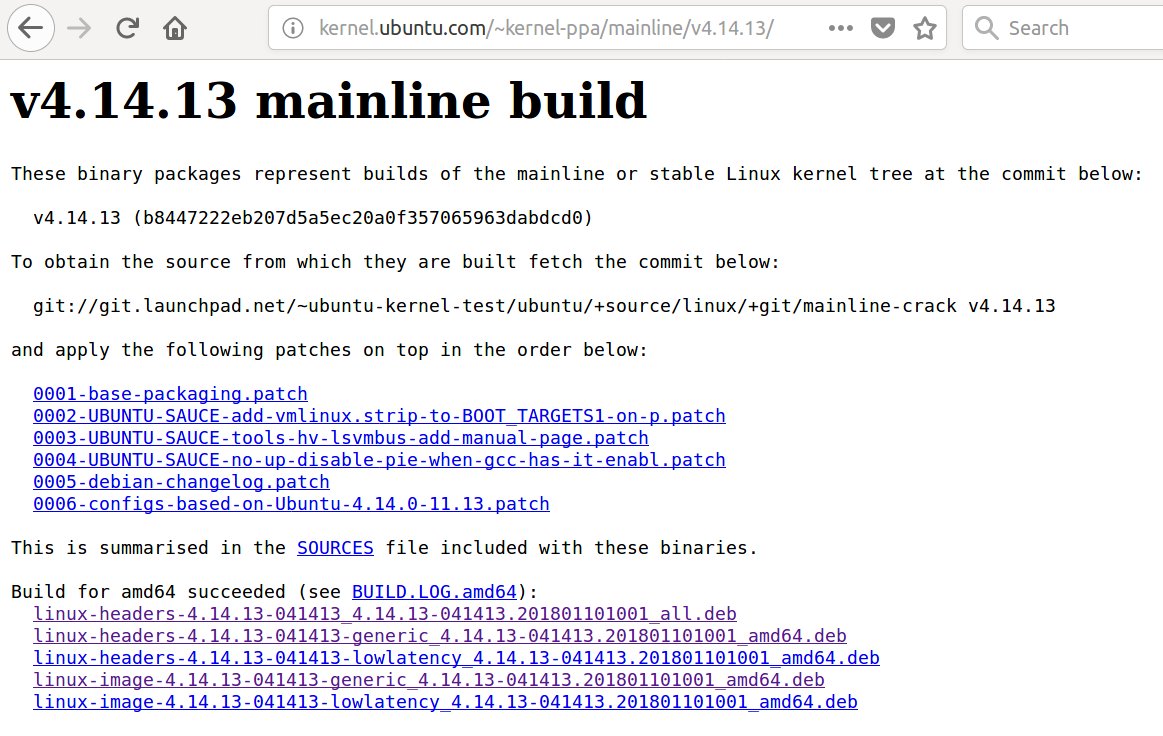 If you have updated to the latest kernel it's important to see the older kernels you've missed using this command:

When you see a newer supported kernel offered by Ubuntu Kernel Team you should install it and test it. For example to see what to install for 4.13.0-32 use:

I'd the same problem, it could be a driver touchpad issue.

In my case, I had a conflict between the old synaptic driver and the new libinput package. This topic helps me : Debian GNOME: touchpad settings missing. Use libinput instead of synaptics

After fresh install of libinput, I ran :

And my touchpad works again

I have the same issue on Ubuntu 16.04 with 4.13.0-36-generic Kernel.
To disable PEAQ WMI Hotkeys Permanently, Use command: sudo modprobe -r peaq_wmi, which worked for me.

Add the two lines below to the end of the file, /etc/modprobe.d/blacklist.conf:

0
Instant keyboard input after some update
1
Inconsistent Trackpad Movement
756
How do I remove old kernel versions to clean up the boot menu?
179
How to update kernel to the latest mainline version without any Distro-upgrade?
16
Repeat key functionality doesn't work
10
Install Ubuntu including all drivers from the USB-Live system
9
Touchpad not detected on Lenovo Ideapad 320 with Kubuntu 17.04
12
Keys get "stuck" randomly and type endless line of a particular letter/command
6
Slow speed on Hotspot created from Ubuntu 16.04 with RTL8723BE Wireless Network Adapter
7
Involuntary key repeat in Ubuntu 16.04
See more linked questions