How can I access directly to my backup files, without having to restore them?

I've allways made "simple" backups, saving all my files normally in folders on my external hard drive. I've already used the tool that Windows 7 (on my desktop computer) offers to make backups, but it isn't realy diferent from copying them manualy.

Yesterday, I decided to give a chance to Deja-Dup, and I made a backup from my netbook, and them I restored them to a virtual machine, just for experiment. And I felt realy amazed when I saw that Deja-Dup, because it backups all my home folder, was capable to restore not only my files, but also all my apps configurations and even my background! I think this app is incredible, and it deserves to be used on my computer! :D

But there is one problem. I have about 100GB of data, and I want to have it on both netbook and desktop (Ubuntu and Windows. I don't use it on my desktop because of some games I bought and wich I can't play on Ubuntu). It's a lot of data to duplicate.

If I skip some files from Ubuntu backups, like pictures, my Background will disappear, and I will have to put those files separatly, which will take much more work than backing up everything. I just wanted to know: Is there a way of accessing those files without having to restore them, from Ubuntu/Windows? I mean, to open the backup files like 7zip would open a zipped file, so I can take just what I want from the backup files, on any OS.

I want also to say THANK YOU to Ubuntu developers and to the comunity that make this OS so freaking amazing. Ubuntu is the best OS I've ever used, specially with Unity desktop. Please continue with the great work!

Yes, it's possible. Go to the directory where the file used to be, (eg: Pictures), open the folder in Nautilus, and click "Restore Missing Files..." 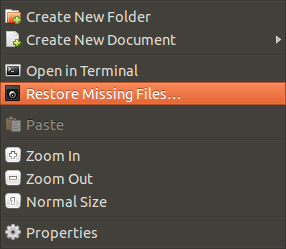 If a file or directory has since changed, and you want to restore previous versions, right click on the file itself, and choose "Revert to Previous Version..." 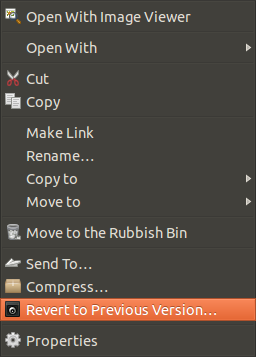 If you need to access some of your back-upped files frequently, go for a back-up solution like Rsnapshot or BackInTime, and leave duplicity-based backup solutions like Deja-Dup. It will save you a lot of time.

Deja-Dup uses duplicity, which stores backups as a set of encrypted archive files. There exists no simple method to access the files in the backup than restore via duplicity or Deja-Dup

There is a Windows Duplicity frontend called "Duplicati" (at www.duplicati.com) which does the same deja-dup does for Windows, and might be able to access your backup. You might lose some file attributes (e.g. access rights, read only flags, thumbnails etc) when restoring on Windows, but this might be acceptable. If it works, give me a thumbs up, I'm also curious :)

BUT: if you really want to use all your files on both Windows and Linux I highly recommend you get some NAS (I have good experience with WD Mybook Live, they are quite cheap and good), then you can access your files from both computers at the same time and don't need to sync all the time.

If you need direct access to your backup files, then rdiff-backup is the very best answer. It creates a mirror of your original files and directories, and changed/deleted files are stored as increment files, which must be first restored, of course.

But accessing a file that is in the mirror? Simply locate it on the backup, and copy it over to your computer. Likewise, restoring the most recent version of your backup is a simple as copying files.

It'd be nice to have a gui that shows backed up file versions and allows you to delete specific file versions from the backup (a security need I have) or restore them to original or other folders.

the fies will be in a .gz format. you can open them without restoreing them. if you open the volume dir. you can use "file-roller"

khartpencekhartpence
1
1
Add a comment  |
Highly active question. Earn 10 reputation (not counting the association bonus) in order to answer this question. The reputation requirement helps protect this question from spam and non-answer activity.

3
Deja-Dup Backup Failed - Invalid data - SHA 1 hash mismatch for file
13
Can I restore a backup on a different computer than it was made?
1
Backup doubts: how can I use my backup files
4
How to restore a broken Deja Dup backup manually
0
How to restore a deja-dup backup using a ubuntu booted from usb live?