Opera demanding that I upgrade to use VPN, but Opera already in the newest version

However, in About Opera, it also says

I've also tried downloading the DEB and RPM files from opera.com but they also are this same version.

Any ideas what is going on or how to solve it?

Looks like it is relatively easy to get to the latest stable release of Opera under Ubuntu 14.04 and version 50.0.2762.45 certainly has a working VPN on my system. Add the following PPA and install opera-stable:

This worked fine on my Ubuntu 14.04 system as the following screenshot demonstrates: 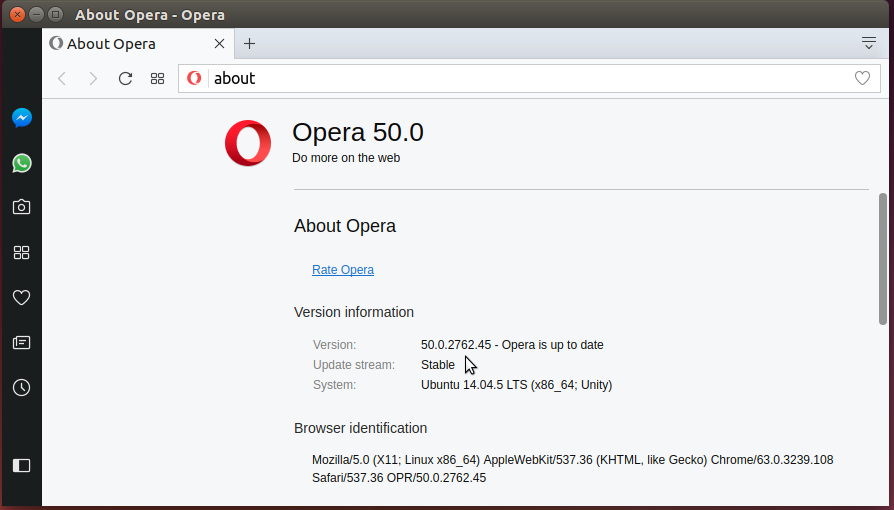 And another screenshot showing the VPN at work: 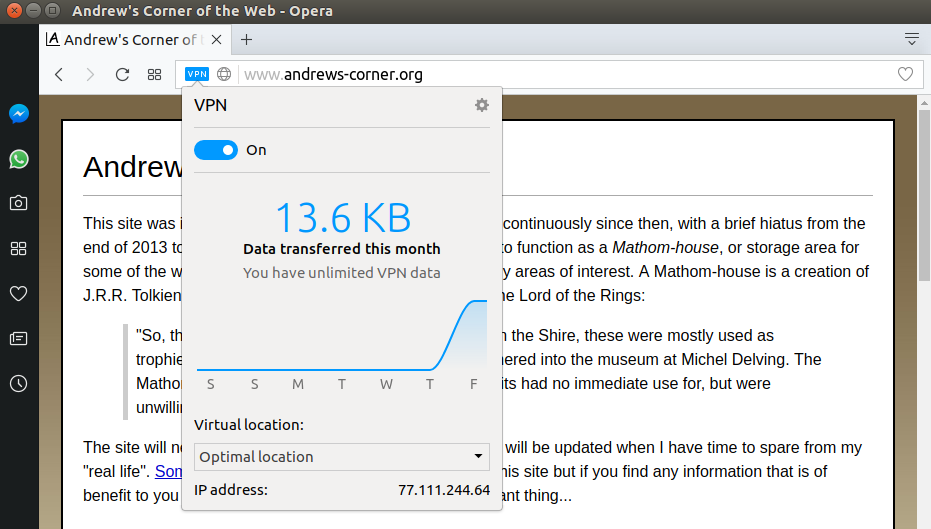 If you are running 14.04 release of 32-bit system, the "About Opera" page will indeed look like this:

Most recent discussion dated November 2017, was found as this thread on Opera forums, which gives a direct answer from a moderator.

Nope, support for Linux 32 bits has been ended.

For official information, this dated post "Frequently-asked questions about Opera for Linux" in late December 2014 on Opera blogs that mentioned only 64-bit Opera is provided for recent releases.

Is Opera available for 32-bit Linux?

The latest stable version of Opera for Linux is 64-bit only, based on what most Linux desktop users have installed. However we have developer versions of 32-bit Opera^1.

^1 This link points to another dated post featuring Opera Developer 30 in 2015. Link has been quoted anyway, since the post mentioned the decline usage of 32-bit Linux systems.

The "Browser upgrade required" restriction seems to be added recently. I was still able to use VPN service from Opera for Linux until end of 2017.

Anyway, recent versions of Opera for Linux is for 64-bit systems only.

4
How to update Opera browser?

3
Why won't Opera let me use the Ubuntu font?
4
Brother MFC-J470DW scan function "Check Connection"
0
Ads by LaSuperba showing on every browser
12
How to connect to SFTP in FileZilla using a private key
0
Opera-stable seems to lack premissions/privileges in 14.04
1
How to install rsibreak 0.12.1 from source using cmake?
8
Ubuntu 14.04 to 16.04 Upgrade failed
3
Ubuntu 16.04 install ElasticSearch 5.x, failed to start
0
problem in updating Opera browser