In my office my team and I are going to type texts in the future which will include mathematical signs. Two programs are being proposed: LibreOffice Writer + Math or Microsoft Office + MathType.

I would like to advocate for the first solution, but I need to know what technical advantages and disadvantages each program has. Compatibility with Ubuntu is an evident and important characteristic for LibreOffice, but could you give some other aspects? As a side question, do you advice any other program, even if not WYSIWYG and thus not my preference in this case?

Sorry for providing question instead answer and slightly hijacking, but why is choice limited to LibreOffice Writer?
There are just too many ways on Linux AFAIK to include math notation in a document.

One familiar and light option would be AbiWord, which accepts LaTeX notation and editing: 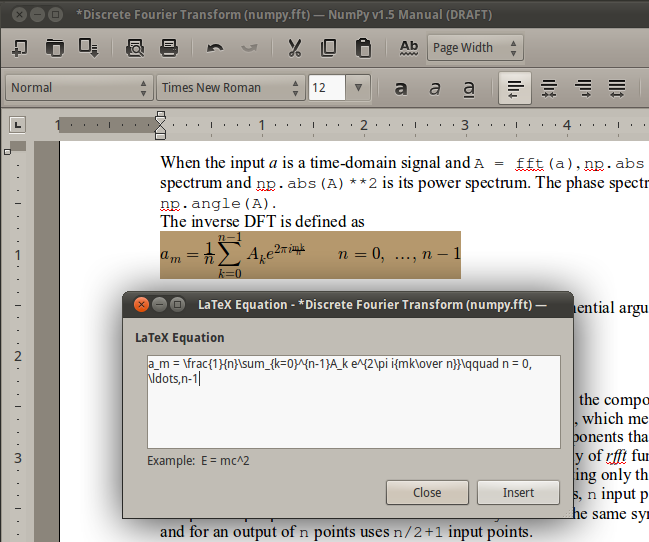 Other tool (abandoned unfortunately, which I compile from source) that offers LaTeX transcript in many formats through simple drag&drop functionality is ekee: 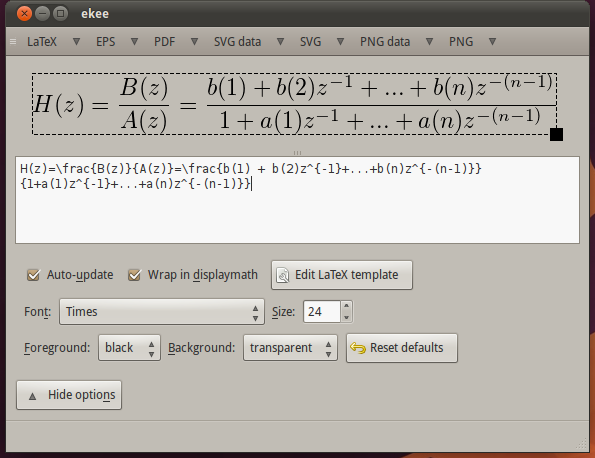 I am a scientist in computational fluid mechanics and I use both: MS Office with Microsoft Equation 3.0 at one of my computers at home, and Libre Office on Ubuntu at work, and at one of my home desktops. And I have never met any difficulties in creating and editing any (even quite complicated) equations. Additionally Ubuntu and Libre are free. But really I am very satisfied with both solutions.

TeX people often claim that you can enter math faster in TeX than in MathType. However, they often just say this with no evidence to back it up. Often they have years of working with TeX, try MathType after working with it for 15 mins, and then claim that MathType is much slower.

They also assume because you can pick symbols and structures using the mouse to buuld an equation that you have to. MathType defines keyboard shortcuts for virtually everything and let's you redefine them according to your own scheme. They are much shorter than TeX's keywords so fewer keystrokes are required. Finally, if the user happens to know TeX for an expression, they can enter TeX language for most things.

Many TeX people claim efficiency because they rely on a library of TeX macros they'be built up over time. This increases efficiency by taking advantage of the repetitiveness of most math. MathType has a roughly equivalent feature with its customizable toolbar. It can't do everything TeX macros can do but it has one big advantage over them. You can create them on the fly. Macros mostly require forethought since creating them takes one away from the task at hand. In MathType, if you see that a subexpression you have entered is going to be needed several times later, in the same equation or in subsequent equations, you just select and drag it to the toolbar. Later, when you need it, just click on the toolbar cell and it inserts the subexpression.

My company, Design Science, makes MathType so I am definitely biased. I will say that TeX does a wonderful job of formatting math. And I mean no disrespect to Donald Knuth and the TeX community in general.

Not the answer you're looking for? Browse other questions tagged libreoffice microsoft-office or ask your own question.