How does Unity work in multi-monitor configurations?

Unity in 10.10 appeared to be focused around single monitor configurations with a single tasking workflow. This works quite well on a netbook which has limited screen real estate.

How does the present version of Unity scale up to include multi-monitor and multi-tasking workflows?

For 10.10 multi monitor support was rudimentary, as that was focused on netbooks -- if you were giving a presentation and you ran Unity we didn't want the top panel overlaid on your presentation.

For 11.04 and 11.10 the multimonitor support is much better. I'll talk about how my setup works with Nvidia, but I don't have the hardware to comment on ATI and Intel support so hopefully someone will post seperate answers for those.

For 12.04 and 12.10 there is a specification for how to improve multi monitor support in the desktop.

Each monitor gets a panel with the window controls, the application menu, and then the indicators. When the windows are maximized each window gets integrated into the top panel of each screen. The indicators are cloned so that you're never too far from the system menu.

When the windows are unmaximized the application menu for that app will be displayed on whichever panel the application is on so that you don't have the menu all the way on another screen:

Using the open source ATI driver with RandR (you setup from Monitor Preferences, see screenshot) then the same result is achieved as with Nvidia Twinview. 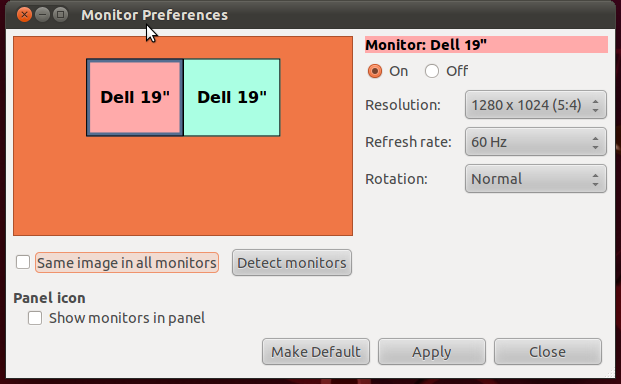 Here is a list of possible combinations of multi monitor setups and their results:

There are some bugs (other than the first, they are generally small aesthetic details):

There's still the potential to improve support further, for example the suggestion in Bug #755357 to allow two global menus to be active at the same time.

The biggest problem that I had with Unity was that it correctly identified my right monitor as the primary one and displayed the launcher on the left side of that monitor.

I briefly looked for a setting that would move the launcher to the right side of the screen, but did not find any. Which lead me to revert back to Gnome "classic" as it was impossible for me to use Unity with its current multi monitor support.

At the moment it's a bit stupidly implemented because there doesn't seem to be a way to set the primary monitor. The unity launcher settings talk about "the left side of the screen". Which probably would have been a sensible assumption to make during the previous millennium when nobody had more than one monitor but today talking about "the screen" is similar to talking about "the hard drive" or "the usb port" or anything that the user is likely to have more than one of.

As far as I can tell there is no way to configure the launcher to a different monitor. The easiest thing seems to be to swap the physical connections such that the monitor on which the launcher appears is the left hand one. This may not be possible if you do not have suitable hardware connections.

I really feel this needs an update, As I am using unity on 14.04 with a 750ti, Proprietary drivers, and three screens. There are options to place a launcher on each screen, one screen individually, enable and disable sticky edges, rotate the screen individually for all three, change scaling, mirroring, placing images across all screens, fullscreen on one and work on the other two, run a video across all three screens, or three individual videos (not necessary...). It's come a long way, and people looking for support should have an up to date answer.

Not the answer you're looking for? Browse other questions tagged unity multiple-monitors or ask your own question.

3
Multiple displays + Unity
1
How does /will Unity handle multiple monitors?
166
What's the right terminology for Unity's UI elements?
2
Configuring two displays with Unity
1
Does Unity support Dual Monitors?
1
How do I make the Panel and Window Decorations appear on a second monitor?