Will my device work with Ubuntu?

I have a device on which I would like to install Ubuntu. How do I find out if Ubuntu will work on it?

This is the only real answer — there is enough variation in hardware specifics (even in a given model), and software changes too often, for any specific answer to remain valid long enough. Conversely, the many different components involved can cause many, different and unrelated, problems, so a post about what will happen with a specific device doesn't fit well with the Stack Exchange Question & Answer format:

You should only ask practical, answerable questions based on actual problems that you face. Chatty, open-ended questions diminish the usefulness of our site and push other questions off the front page.

Help: What types of questions should I avoid asking?

You can make a bootable USB from the Ubuntu installation ISOs, and then try out a live session instead of installing. The live session doesn't make changes to your system by itself, so it's a safe way to test drive Ubuntu. However, even a successful run of the live session is not a certain indicator - there have been cases where the live session worked fine but the installed Ubuntu didn't.

Now, proceed to the first few steps of: How do I install Ubuntu? You should see an option to "Try Ubuntu": 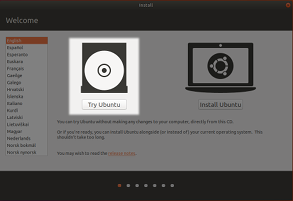 Once the live session starts, play around a bit with Ubuntu to see how much of your hardware works and how well it works. Try to narrow down any problems that you faced, and post individual questions with relevant details. Then we can help you with the specifics.

What follows is a set of links, both to posts here on Ask Ubuntu, and elsewhere, that can help you in your quest. I'll try to avoid passing judgement on any particular manufacturer, but instead try to link to canonical posts that's likely to be kept updated. The major tag for each section is also given next to heading, use them when asking questions. So, for example, a WiFi problem with a Qualcomm Atheros chip would be tagged networking wireless atheros and include the output of the wireless info script.

Hardware support can be hit and miss. It is helpful if you can lookup the exact hardware configuration of your system (i.e., not "3GB graphics" or "Killer WiFi", but "NVidia GTX 670MX" or "Qualcomm Atheros QCA6174 802.11ac" - the exact model number is important).

Recent releases of Ubuntu tend to play well with UEFI. See How do I install Ubuntu alongside a pre-installed Windows with UEFI?

Post a question with the information from My wireless/WiFi connection does not work. What information is needed to diagnose the issue?

If you have an ARM device, these might be informative: