How can I elevate nautilus privileges to move or copy a folder as root?

Say I have a folder open in Nautilus that's in my /home/user/temp directory. I'd like to move a folder from there to my /opt directory (it's a program). Is there a way I can elevate the copy command up to a sudo so that I can copy the folder without having to start a new instance of Nautilus from the command line?

As far as I can say, based on what I know and have experienced:

sudo is used for command line applications/commands and gksudo is useful when you try to run a program using the Run Application dialog window by pressing Alt+F2.

I have read that gksudo is just the graphic version of sudo.

Anyway, you can both drop sudo nautilus and/or gksu nautilus in a terminal for the purpose to do what you wish, having the same effect both commands. But if you want to omit the terminal and you wish to run it directly with the "Run Application" dialog window, just press Alt+F2 and write gksu nautilus, after which you will be prompted to enter your password, then the nautilus file browser will open with root privileges.

Additionally, you can achieve to open files/folders as root with a single click by using the "Open as Administrator" option via right click. Which in any case will open a new nautilus instance for the given folder and will open files as root, this may also open/run applications as root but I haven't tested it yet. 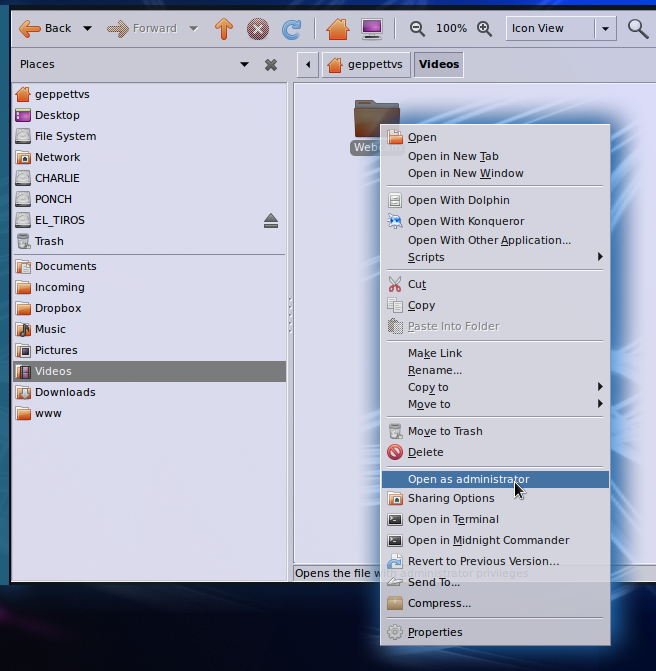 You can get the "Open as Administration" option in your contextual menu by installing nautilus-gksu via command line: sudo apt-get install nautilus-gksu or by using synaptic as shown in the next image: 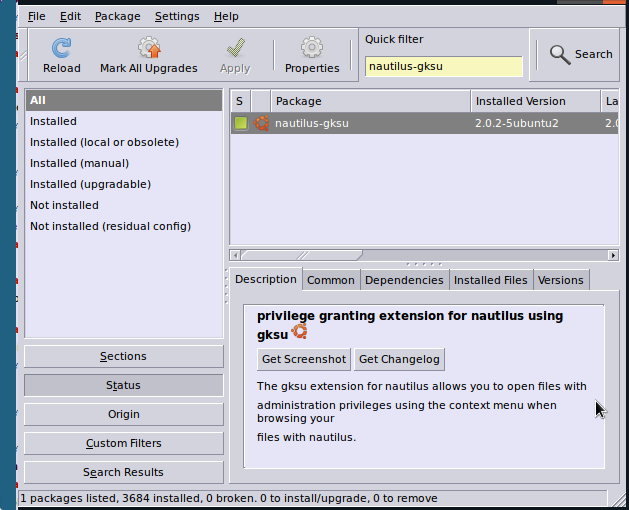 you need to run Nautilus as root

type this in the terminal

now you can move using the GUI.

or use this command

Here's the nautilus-script I use to open an admin (root) Nautilus window:

Another dandy solution is to launch another copy of Nautilus with root (sudo) privileges from a command line:

The closing & means the command runs as a background job; hence the use of gksudo (using sudo would mean an invisible prompt that you can't respond to). xdg-open takes care of launching an explorer window (nautilus or other).

You may need to install the xdg-utils and gksu packages beforehand.

You may get a bunch of warnings and Gtk-CRITICAL and Glib-GObject-CRITICAL messages upon closing the elevated Nautilus window, but these are harmless as far as I can tell. I'd love to get rid of them, if anyone knows how.

Instead of [Filename], type the name of your file without brackets [].

Another easy way is

Or I would recommend installing nemo file manager. It has 'open as root' in its right click context menu

2
Filemanager that asks for sudo rights when it needs it
3
How to elevate a programs privileges on the fly?
1
How to get full rights in Ubuntu to manipulate a file that is owned by root
103
What is the difference between "gksudo nautilus" and "sudo nautilus"?
105
Why is gksu no longer installed by default?

10
How to be granted root rights while browsing files/directories with Nautilus
8
How to move between Nautilus panes?
90
How to open Nautilus at current command line directory?
5
How can I copy a path out of a open/save dialog and paste it into Nautilus?
6
How can I change the default folder location that nautilus opens?