Error: kernel headers not found. (But they are in place)

After some output this line is printed:

But the headers are installed, at least accordingly to dpkg:

The running kernel is:

How do I fix things so that Guest Additions installer is able to find kernel headers?

I don't care for fail #2, because that's a server and I don't need X server. But I need shared folder support.

The message is misleading.

(Even though this question has an accepted answer, I'm adding this answer in case it helps somebody else out...)

Although I had identical symptoms, I tried out every suggestion to this question, and yet nothing worked. I finally found this thread suggesting it's the VirtualBox version not being up to date with the Linux kernel version.

So, if nothing works for you, try installing the latest version from: http://download.virtualbox.org/virtualbox/ (at time of writing, this was 4.2.6 for Debian-based systems).

I fixed this error by installing dkms and upgrading my version of VirtualBox. Turns out old versions of the VirtualBox guest additions often won't work with the latest kernels.

The answer about you needing X to use guest additions is just ridiculus. The reason it works after installing X is that it pulls libglib as a dependency, but it would be really unnesessary to install the entire X server just to get the additions running.

All the packages you need are the following:

Obviously it's only part of build-essential and libglib that you need, but rather than investigating exactly which packages are necessary it's easier to just let them pull their dependencies.

A sidenote is that these are exactly the same packages that you need for the vmware equivalent "VMware Tools" on a vmware machine.

After installing the suggested packages with the following command:

I upgraded my version of VirtualBox as suggested by dwurf. That fixed it for me.

To get a VirtualBox ubuntu server guest to correctly accept a guest-additions install you will need to have a minimal xorg package install:

By doing this, you will have the shared-folder support.

As you have found, the guest additions is one very large script - "VBoxLinuxAdditions.run"

You may be able to unpick this file - I wouldnt recommend it, because as newer versions of virtualbox is released, the version of guest-additions is usually bumped as well.

In addition, I would recommend (if you haven't already), install dkms. When newer ubuntu kernels are updated, the guest-additions kernel modules will be automatically compiled. Without dkms you will lose your shared-folder support when a kernel update is made.

I have tried ALL the above solution and I am pretty sure that I have installed the proper headers but still no luck !!!

And I have also installed latest version of Virtual Box as of today 5.0.4 but still I have the error when trying to install Guest Additions with error

In the end what solved my problem is running the VBoxLinuxAdditions.run from /root directory instead of other directory like /home/ !!!

I was originally running VBoxLinuxAdditions.run from /home/ directory and keeps having this dam error but after using command below from root directory, it's fine, problem solved!

After this you can simply use reboot, then you should have Guest Additional done properly and FULL Screen too ! YAY !!!

Usually i install the guest-additions directly via virtualbox (mount cdrom, sh ./VBoxLinuxGuestAddtions.run). However, most linux-distributions offer you a package which can be install via your package-manager. For me following command solved the issue:

I achieved success by downloading a new ISO of the VBox Guest Additions and running the VBoxLinuxAdditions.run script I went here Virtual Box download site and grabbed a new ISO.

For reasons (too dull to go into) I could not update my version of VirtualBox on the (Windows) host, but I could copy the new ISO file to a local place on the file-system.

Then, In the "Devices" menu on the VM window I chose a new virtual CD/DVD and picked the place where I downloaded the new ISO image.

Then inside the Debian VM I went to \media\cdrom and ran the new VBoxLinuxAdditions.run script as root. (I had already installed dkms, current kernel headers etc.) Then the script stopped falsely complaining about the missing headers (they were not missing) and built the kernel objects it needed.

The whole reason for doing this was so that X.org would give me additional display resolutions and I could run the VM at a higher res than the conservatively set defaults.

I was getting the same errors as OP when trying to compile the VirtualBox Guest Additions v4.1.12 in various flavours of K/Ubuntu 13.04 guests.

I had the following virtualbox versions installed on the Ubuntu 12.04 LTS host:

As per instructions at: http://www.ubuntuupdates.org/ppa/virtualbox?dist=precise

Now the K/Ubuntu 13.04 guests can build and install their VirtualBox Guest Additions:

I think that you are missing something. Try to install

I was experiencing this problem and fixed it by running these commands:

The only solution that worked for me was removing Virtual Box and installing the latest version from the VirtualBox website (version: 4.3.10 (repo) vs. 4.3.22 (website)). 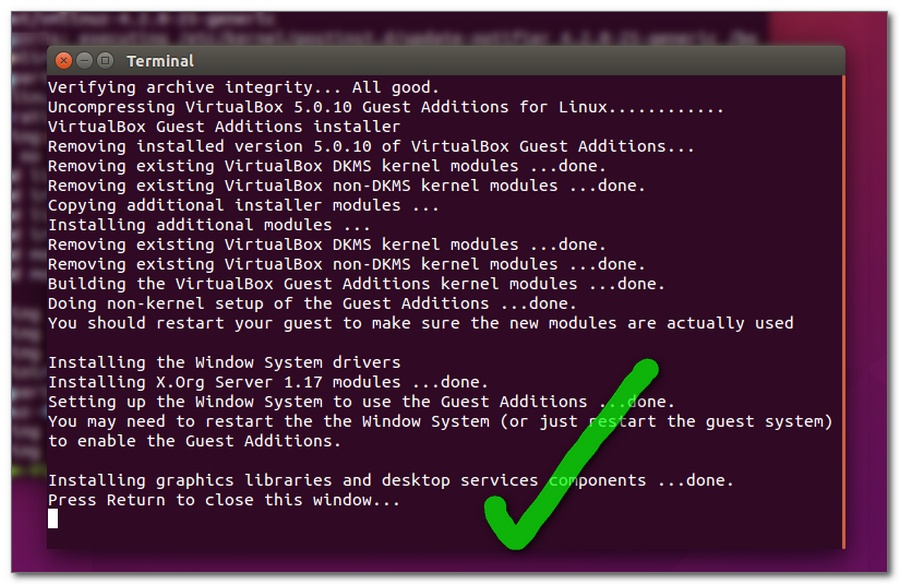 Not the answer you're looking for? Browse other questions tagged kernel virtualbox or ask your own question.