Is there a derivative that uses a Rolling Release model?

But because there are so many people who would like to use an ubuntu with RR Im asking myself why isnt there an Ubuntu Derivate with RR. I couldnt found one, there are a loooot of Ubuntu Derivates but no RR. Is it just impossible? I mean Ubuntu = 6 months cycle, so the derivate have to be a 6 month cycle too? Is there no other option? Or are there already some smart guys trying to solve this problem? Thank you!

There is no official rolling release, all the supported Ubuntu derivative releases (Kubuntu, Xubuntu, Lubuntu, Edubuntu, Ubuntu Studio and Mythbuntu) are based on the Ubuntu release schedule, 6 months per released version and 1 LTS version every 2 years.

There are many rolling releases with unstable Debian based, ie:

The closest that you will find from a rolling release supported by the Ubuntu base and using Ubuntu packages is +1, run it always on alpha or beta.

There is nothing wrong with assuming that Ubuntu +1 is something like a rolling release except for the fact that there is an EOL for the versions and once a version is released you have to force the system to use Ubuntu +1 again. It does not really fit the criteria for the name rolling release.

It's not a rolling release per se, but is the closest you will get.

Rolling releases (by definition) goes against what Ubuntu fights for every 6 months, basically before each release, packages are imported from Debian Unstable continuously and merged to the Ubuntu repos with modifications done for Ubuntu. A month before release, imports are frozen, and packagers then work to ensure that the frozen features interoperate well together.

Its a lot of work to be done and supply you with stable packages.

To move your system to the next release use the command sudo update-manager -d, it will allow you to install the packages from the future release 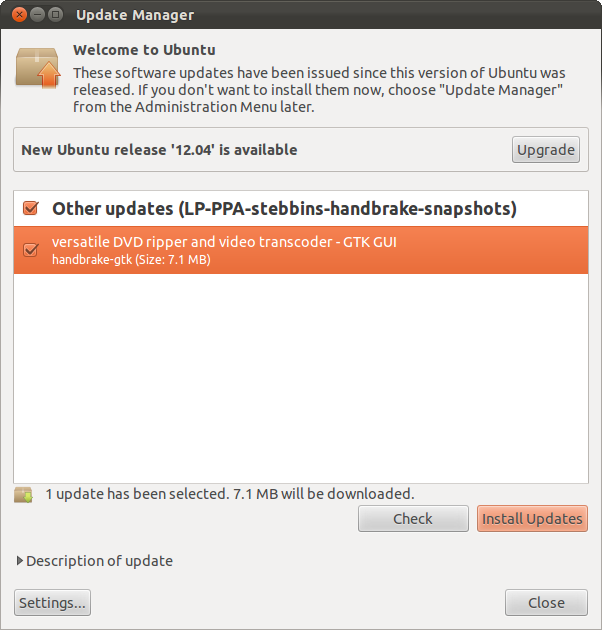 You will receive constant updates for this until the version is really released in April 2012, after that you will be able to apply the command again and update to the next future release after a couple of days.

Please note that this is not the intent of Ubuntu and that (as mostly any rolling release) the packages might break your system. If you are not so familiar with recovering a broken system this is not really advisable. Having said that I have to explain that depending on the skills some Ubuntu users "live" on Ubuntu +1 (mostly bug catchers and developers, but they exist).

In the end, it's up to you: the unstable world of Ubuntu +1 or the stable comfortable sight of updated stable packages every 6 months.

Bruno's answer works but since that was made, there has been a new way to do it without the hassle.

From the Ubuntu GNOME Blog (works for all Ubuntu variants also!)

There is a release called devel.

If you put that in /etc/apt/sources.list instead of utopic/vivid etc, you will be kicked over the new devel version a few days after it opens. No need to ever upgrade to the next version/release; just a dist-upgrade is enough.

These days, the devel series are a bit stable, there are lots of automated testing, that makes sure everything is installable and passes tests before it propagates to the main archive. There is the odd issue that slips through the tests, but they get fixed quickly and while we wouldn’t recommend it for a full production system, the people that want the latest and greatest GNOME and tinker a bit, would be fine on it.

This is how to edit /etc/apt/sources.list

Once the next cycle starts, you don’t need to do anything except wait!

If you want to read a blog about it, I'll refer you to

or from the source directly

Convert Ubuntu into a "rolling release" that tracks the devel series; for the toughest of Ubuntu users.

Created by Martin Wimpress, (lead of Ubuntu Desktop at Canonical)

Using Rolling Rhino will put you off-topic for sites such as this, just like my own use of the development cycle does. (I moved to groovy the day after the release of focal, I'll move to the h series the day or so after groovy becomes 20.10, and I've been on the development cycle since artful or before became 17.10, and know from experience problems can occur). You need to be aware that you'll have less support options using Rolling Rhino thus the warning given "for the toughest of Ubuntu users" should not be taken lightly !

For now, you might want to try Bodhi Linux. It is a Partly Rolling Release & is Ubuntu based.

Not the answer you're looking for? Browse other questions tagged derivatives or ask your own question.

8
Will there be a derivative with upstream GNOME 3.0?