When it started up after installing, I noticed the sound icon in tray being the "speaker + red line", indicating no sound. Systray Sound Icon > Dropdown say:

no output or input devices found

In Settings, I can't change anything related to audio since the system claims there's nothing there. Settings > Multimedia > Audio Volume. No ouput/input device found. 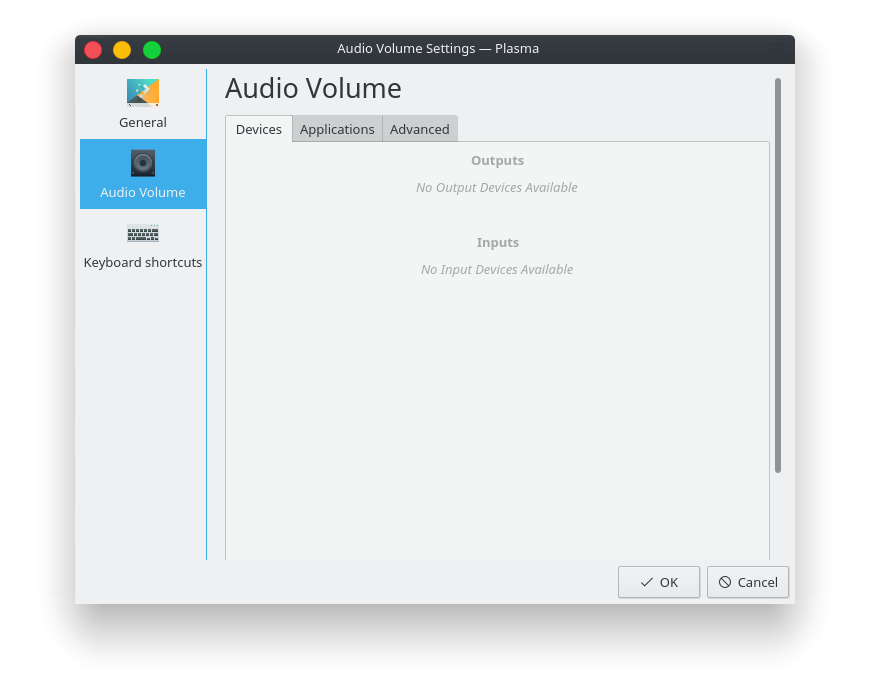 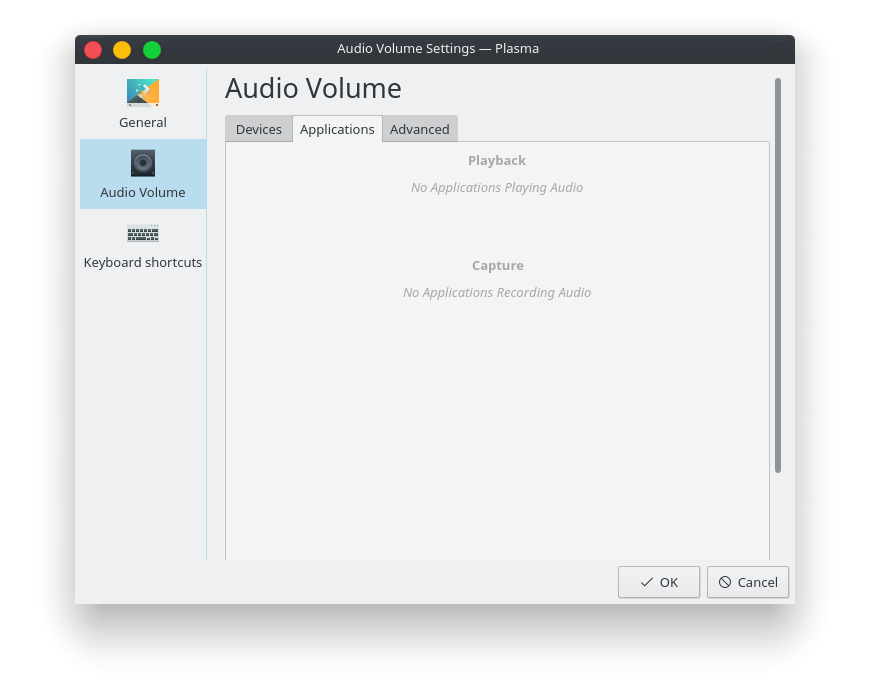 Strangely enough, Spotify and VLC is making sounds. But not Firefox, not Pillars of Eternity (Steam (Flatpak)). And nothing show up in settings. Those pics were taken while playing music in Spotify.

Connection to PulseAudio failed. Automatic retry in 5s. In this case this is likely because PULSE_SERVER in the Environment/X11 Root Window Properties or default-server in client.conf is misconfigures. The situation can also arise when PulseAudio crashed and left stale details in the X11 Root Window. If this is the case, then PulseAudio should autospawn again, or if this is not configured you should run start-pulseaudio-x11 manually.

These was no countdown (5s), but the window did blink twice to something to the effect of "trying to connect to PulseAudio". Nothing happend after that.

My sound device is connected via standard Jack (normal speakers). No HDMI or anything. Two monitors connected via DP. Had no problems with it on 17.04.

I tried the following, from an old question: mv ~/.pulse ~/.pulse_backup

Result: mv: cannot stat '/home/USER/.pulse': No such file or directory

I had the same problem and seeing the logs in /var/log/syslog I had an error for pulseaudio daemon:

So I opened /etc/pulse/default.pa and edited it using # to disable 3 lines:

Maybe it'ś not the best solution but it solved my trouble.

I have solved this by reinstalling pulseaudio.

Pay attention: if you have some custom edits inside /etc/pulse, they get lost if executing rm -rf /etc/pulse as shown below! In my case there are only a hand full of files that have been reinstalled.

Update 2019: take care if package plasma-desktop is uninstalled while removing pulseaudio. Reinstall before booting, otherwise your system may not boot properly.

This also deinstalled some other packages (like oss*) which have not been reinstalled, and in my case, I don't miss them at all. ;)

If your card is listed by something like sudo aplay -l, but not listed in pavucontrol, your card may be blocked by further processes. Check that sudo fuser -v /dev/snd/* doesn't list any other processes than pulseaudio. In my case when upgrading to kubuntu 19.04 it was blocked by squeezelite process, so I stopped and disabled squeezelite and everything was fine:

... et voila! My soundcard is available inside pavucontrol again.

I had the exact same problem (same symptoms) and ended up wasting hours looking for a solution. I solved the issue by editing default.pa to statically load modules and replaced hw:1,0 with hw:0,0

Save and exit, then run:

Hopefully you have sound at this point.

just refuse back or reload pulseaudio service/etc that directly behave on..

next just refuse it back, you can use any daemon service reloader that can help you to refuse your service it self

try to find in .config/ if there another folder that config the pulse in my case it was google-chrome-remote-desktop app, that was create another profile with pulse-audio config that prevent the normal profile to load

@peterling 's answer worked for me it is the last one on this page: askubuntu.com/questions/70560/why-am-i-getting-this-connection-to-pulseaudio-failed-error

He said I had to enter this in the terminal:

this is what it looked like on the terminal:

After this I ran pulseaudio volume control From using the normal shortcut by clicking on it in lUbuntu 16.10 You're using a much newer version of KUbuntu but I think this might work for you because we have this in common: "

Don't have enough rep to comment, but I tried the 3rd solution above by ChristophS. While this looks like a good solution, on Kubuntu 18.10 using purge uninstalled my plasma-desktop and kubuntu-desktop. I had a bunch of unnecessary packages listed from a wine uninstall, I plan to reinstall. Needless to say caused quite the confusion, especially paired with the permission changes which ended up being the cause, which I thought messed with the desktop.

Lesson being: be careful what you purge! I think there should be a comment on the above solution to warn about the current inclusion of desktop with purge pulseaudio.

If hack from the above link works, might be the permissions: HOME=/tmp/$USER pulseaudio --start

I had a similar issue due to pulseaudio-equalizer:

So I uninstalled it:

After a reboot I had:

I finally found the solution by flushing my configuration:

I just opened a related bug in launchpad: https://bugs.launchpad.net/ubuntu/+source/pulseaudio/+bug/1859996

Uninstalling Pulseaudio and installing kmix worked for my eeepc 1015cx with kubuntu 18.04 32 bit.

I ran into same problem. After installing pavucontrol I restarted my system and now it's detecting my sound card and headphones.

In case pavucontrol giving errors after installation, restart your system and they will be gone.

Hope this helps others too.

I'm having the same problem in Kubuntu 17.10. I cannot say what the cause was, it happened after I plugged in the HDMI cable or after I paired a Bluetooth speaker and changed the output audio stream to it. After some searches I mixed up some solutions. Audio seems to work now but I'm wondering if this is a good or bad solution. What I did was:

Audio was up but there was no way to control it. Icon in the system tray disappeared. So I did:

At the reboot the icon was in the system tray but audio was mute and not working, exactly like here. So I removed plasma-pa and installed kmix. Doing this, audio is working now.

This problem could come from various reasons, but before purging anything, be sure you have pipewire and firmware-sof-signed installed.

Same symptom in OpenSuse Tumbleweed 20230102 ("No output or input devices found" in KDE). It seemed like pulseaudio had stopped working. And I was running a defunct pipewire daemon. Defunct, as in pipewire-pulseaudio was not installed.

Solution: Replace pulseaudio with pipewire-pulseaudio and actually enable the daemon because it was also off by default for some reason:

21
pulseaudio not working : "Home directory not accessible: Permission denied"
5
Volume icon missing after removing (and re-installing) pulseaudio
2
How can I delay sound in the system?
0
No loudspeaker icon on taskbar, Kubuntu 18.04

14
How to start/configure pulseaudio remotely with ssh?
7
"Failed to open audio output" error when trying to send audio from mpd to pulseaudio
1
15.10 - Sound doesn't work, no sound devices after update restart
1
Audio Devices Disappear?
1
Why does GNOME (Ubuntu 18.04) not recognise my sound output?
1
Audio cuts out and in after upgrade to 20.04
2
pulseaudio won't start after changing settings