How do I move child windows without moving or minimizing parent in GNOME 3?

What happens:
I have (for example) LibreOffice Calc open, with some data columns in it. I highlight the columns I want to chart, then I select INSERT > CHART. The chart child window dialog pops up on top of my data, so I want to move it to the side.

When I grab the top bar and move it, the parent (spreadsheet) window minimizes (I think it actually disappears). Continuing the above example, if I click FINISH on the chart window, I can then see the minimized spreadsheet application, which is the window title bar plus the menu bar just below it.

This seems like really odd behaviour and certainly falls under the category of "not being useful to the user", since the whole idea of moving the child window in the first place was just to be able to better see the spreadsheet!

Pomsky's answer below fixes the problem, but leaves me wondering why the window manager is making the decision that all child windows have modal behaviour (or don't), and not the applications themselves; and further, why modal behaviour prevents moving the child screen around when it obscures useful info on the parent screen. Neither of these seem like good design to me...

It can be done using '(GNOME) Tweaks' (previously known as '(GNOME) Tweak Tool'). There should be a toggle button for "Attach Modal Dialogues" in the Windows section. Disable it. 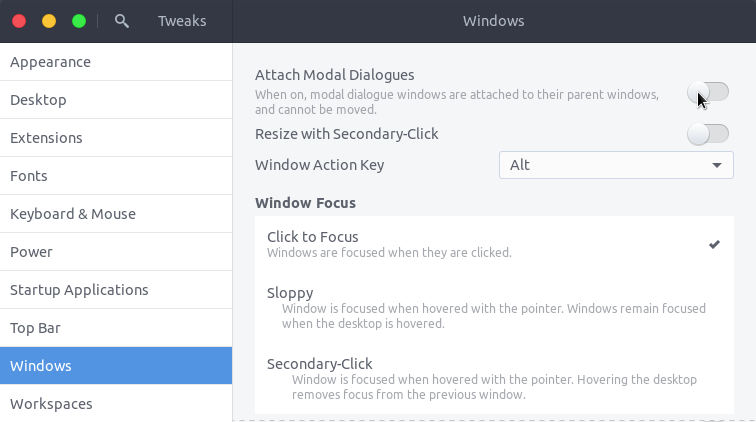 This detaches modal dialogues from the parent window and hence should fix your problem.

If this doesn't work you need to toggle another gsettings/dconf key following OP's answer or use (GNOME) Tweaks as mentioned above.

Thanks to pomsky's suggestion above, which doesn't quite do the job but led me to the switch I needed.

I used dconf-editor to turn off /org/gnome/mutter/attach-modal-dialogs.

For what its worth the minimizing of the libreoffice spreadsheet appears to have been a side-effect of the parent window being maximized.

Pomsky's suggestion of using the tweak tool is much better than using dconf-editor.

Not the answer you're looking for? Browse other questions tagged gnome window-manager window-management dialog mutter or ask your own question.

2
Problem while saving a pdf file from a browser using Ubuntu 18.04
2
Is it possible to "detach" child popup windows in Ubuntu 18.04?
2
Moving dialog boxes shrinks window
1
Move emergent windows instead of main window of the app
43
How to detach modal dialogs from main window? Popup dialogs attached to window title and not movable
1
What is the purpose of making the screen go "dark" when saving files or printing?
1
Allow Maximum Minimize modal window in 18.04

1
How do I group/un-group parent/child windows?
3
Why does a clicked on application not move to the foreground?
7
move window to corner and RESIZE in gnome shell
5
Move semi- maximized windows across multiple (2 or more) monitors
2
Cick to focus is not working 16.04
2
Gnome: separate windows, even if they are for the same application
2
Ubuntu 20.04.4 GNOME with scale 200% on 4K monitor - application windows are maximized beyond screen on re-login
1
GNOME Desktop: Shortcut to move window to "the next screen"