Get Back Ubuntu's GRUB menu with Ubuntu first

My laptop had two OS working: 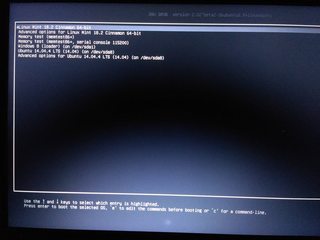 I'd like Ubuntu 14.04 at the first position, Linuxmint, and Windows after that. Also, I'd like GRUB with the Ubuntu style with Magenta background color.

As said in comment, I've deleted Linux Mint and don't know how to get Ubuntu first in list.

If you haven't found an answer yet.

Looks like you only have 1 hard drive /dev/sda, right? If that is the case, boot to Ubuntu, from the terminal type in:

That should override the GRUB that was installed by Mint. Then you will have to update the GRUB again: