Sharing files in LAN through Samba or SSH

I am able to share files between two Ubuntu machine and Windows machine but I have these problems which I can't solve.

Help me through this

First of all: if you want to share files, there are several different protocols of interest: Samba (SMB), NFS, FTP, SSH/sFTP/SCP. Samba is the easiest if a Windows computer is involved, but you can use it also between two Ubuntu (and even Mac OS) machines. SSH is a nice thing for Ubuntu, because it's a very powerful tool - e.g. running rsync over SSH is a command method to keep two directories synchronised. But I'd choose SMB because you mention Windows and probably setting up one protocol/server is enough for the beginning.

Only three important hints for further research about other protocols:

1. When I share files between two Ubuntu machines via LAN, do I need Samba on both machines?

No, not the Samba server. There will be always a server and a client. You can access the shared folders on the server from the client - not the other way around. In other words: the copying progress bar will be always on the client, never on the server. But with two Ubuntu machines, both of them can be client and server at the same time, if you want. The client is shipped with Ubuntu per default, the server is installed automatically when you share a folder for the first time with Nautilus.

2. Without Defining permission on computer 1 I can see all files under / on computer 2. Is their any way to stop that visibility?

That's not true for SMB/Samba. There are certain shared folders and only these are visible to the clients. Check the folder /var/lib/samba/usershares/ and the file /etc/samba/smb.conf, if the path / is shared. Probably you are connecting with SSH and not with SMB. Then you are right, usually everything is visible and you have to set the file and directory permissions correctly. You can find more details about this here: Simple & easy way to jail users

3. Which user and password do I have to use while accessing other Ubuntu machine through Samba?

Usually it's simple: just use any user and password of the other machine. Only in very special cases the user's normal password differs from his Samba password. You can change the Samba password separately with the command smbpasswd, but you should really have good reasons to use two different passwords.

You can allow shares without password. There are many things to say about this, but probably this Nautilus screenshot helps for the beginning: 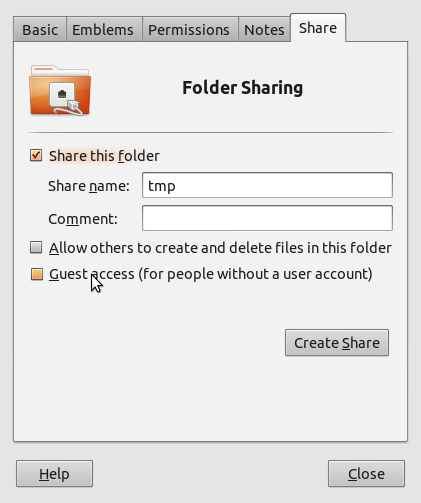 4. How to share files without GUI using the terminal?

The most common use case is SSH/SCP then probably. Just type the following in the client's terminal to copy /path/to/file1 on the client to /path/to/file2 on the server:

server can be an IP address or a domain name. Or another method already mentioned in other answers with rsync:

With Samba you probably would use smbmount (which is not shipped with Samba per default) in order to mount a network share on the client. Then you can use it normally. There are many ways to mount a Samba share. If you are using Gnome, gvfs-mount might be the easiest method:

5. Why is the server not showing up in Nautilus / Network on the client?

As far as I know, the first time it doesn't show up there. After connecting to it once, you'll find it there. The first time, you will have to click "Windows Network", then "Workgroup" and then you'll see your server - hopefully. At least this was the result of my tests.

You can use nmap in the terminal, for example:

if 192.168.0.0 is your LAN. This will print you all network clients in your LAN (which can be discovered). Sometimes this might help, if other machines don't show up under Network.

Question4: to copy files between two ubuntu-pc you can use scp or rsync. Or you can mount directories from p1 on p2 with sshfs. this can be done using terminal

Question2: How do you access other Ubuntu Machines? If you don't want other people to read your files you can use this:

But of course the root use can read them.

The simplest sharing app is Giver - minimum configuration is required

Not the answer you're looking for? Browse other questions tagged ssh samba file-sharing or ask your own question.

7
How can I transfer files between two Ubuntu computers on a LAN without installing additional software?
25
I cant get samba to set proper permissions on created directories
0
Samba - Network transfers from one share to another... local or LAN based?
8
Can read but cannot write to Samba share
2
File Sharing between Ubuntu machines fails: permission denied
0
Copying the Postgres directory via Samba?
1
Share between Ubuntu 18.10 machines without Samba