I installed the latest version of Ubuntu (17.10) , but the problem is, I can't find the menu bars of applications in the GNOME panel. For instance, the Chrome menu bar doesn't appear on the panel like in Ubuntu 17.04 and earlier versions. 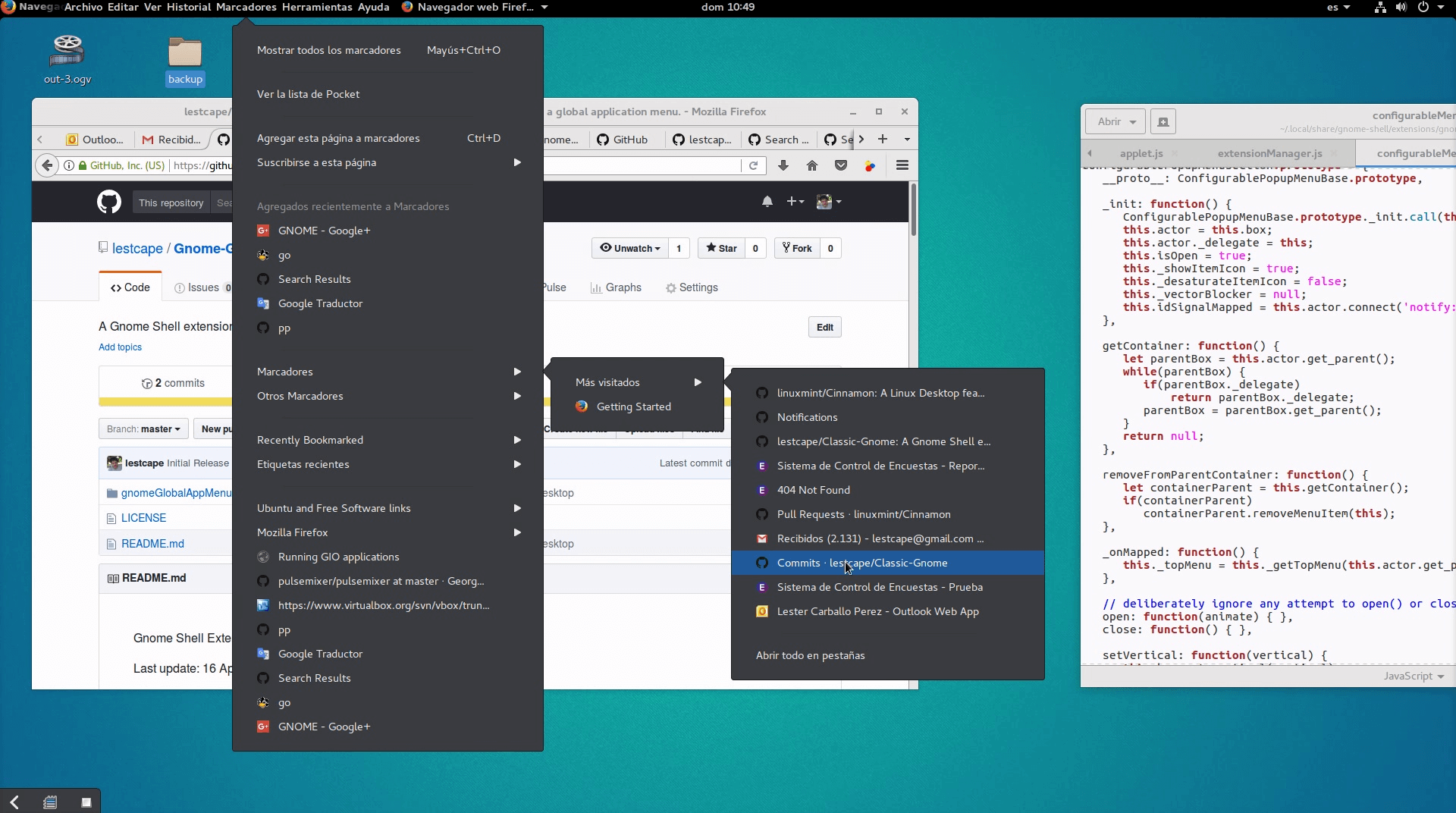 For detailed info you may visit the extension's GitHub page.

Warning: Performance may not be as smooth as Unity's global menu. See this if you want to deactivate/uninstall the extension correctly.

Current status and future of the extension

It will work for the next 6 month at less, as i'm waiting for the release of ubuntu 18.04 to take a desition of what i will do. If the default session of ubuntu 18.04 will be xorg i will continue with the extension for 6 month more. Also, if ubuntu or gnome developers fix or help to fix unity-gtk-module in wayland i will continue the extension. What i will not do is continues making improvements, because this have not sense if will not work on Wayland. Also if the ubuntu developers want to implemented it i will donate the extension to hims and i will help in what is needed. - the developer, 27 Oct 2017

Update: The extension has been discontinued by its original developer. Please consider not using this extension.

Ubuntu is now using GNOME as a primary desktop and they are following the GNOME Human Interface Guidelines (HIG). In GNOME they now consider the menubar an inferior solution:

Menu bars increase the vertical footprint of an application’s user interface, introduce a large number of disclosure points, and function as a fixed set of inflexible options. For these reasons, header bars and header bar menus are generally recommended over menu bars, along with other design patterns for exposing controls on demand, such as selection mode, action bars, and popovers.

A global menu is a menubar exported in a service (a DBUS service). So, to have a global menu, as you are wishing, you need to have a menubar or an internal representation of it at least. But most of the GNOME core applications don't have a menubar right now. The Ubuntu developers were working on including a menubar into the GNOME core applications some years ago, but they abandoned that project at the same time they abandoned Unity:

I'm closing the remaining tasks here. The decision was made for Ubuntu 18.04 LTS that we're not going to use distro patches to add these menus back.

While this Ubuntu project existed, a GNOME shell extension called "Gnome Global Application Menu(HUD for Gnome)" was created. But when the Ubuntu developers decided to not support the project, the extension stopped making sense.

So, it is not possible to have a global menu in Ubuntu with GNOME anymore, unless the project of the Ubuntu developers comes to life again, or we find a way to hack the GNOME core applications, or the GNOME designers and developers change their mind about this feature in the future.

Of course we can select an alternative desktop environment in Ubuntu where the core applications have a menubar and then the desktop can implement a global menu for it. This can be for example KDE, Mate and others, but currently not GNOME.

Not having a menubar is a human decision, not an impossibility of the GNOME desktop or the GNOME applications. But the end result is that you cannot have a global menu in a consistent way in GNOME.

Not the answer you're looking for? Browse other questions tagged 17.10 gnome-shell panel appmenu or ask your own question.

20
How to add Top Bar menu; File, View, History, Tools...for applications in 18.04?
6
Show application menus in top menu bar at Ubuntu 18.04
2
Is there a way to get the file menu on the top bar?
2
How to add Finder and file,edit,Go,view,windows,help thing and a search for apps thing like mac OS on top of the Ubuntu 17.10 ( Gnome ) panel
1
Top application menu missing links after upgrade to 17.10
132
How do I install and manage GNOME Shell extensions?
67
Wasted screen space due to multiple horizontal bars at the top when an application is open in GNOME desktop
8
Is there a way to install Unity 7 in 17.10?
7
How can I remove the title bar on Ubuntu 19.04?
6
How to reduce menu/title bar screen space in 18.04?
See more linked questions