How do I fix "$'\r': command not found" errors running Bash scripts in WSL?

I'm getting an error in WSL while trying to use junyanz/pytorch-CycleGAN-and-pix2pix.

I followed all the install steps successfully on Windows 10 x64 using the steps at PyTORCH on Windows 10: An instructional with screenshots, then Ubuntu for Windows with GitHub desktop How to Install and Use the Linux Bash Shell on Windows 10.

But I'm blocked at the latest steps.

It's where I trying to download or train the model in Windows. Using for example the Ubuntu Linux prompt, I navigate manually to the appropriate place and type a following command like the one below (I also tried in su mode)

I get an immediate error, always the same, similar to these:

Saved my day, hope it helps.

If you are on Windows,

As you say, you're typing the command to attempt to run the script in bash, but notice that the script is actually stored outside your Ubuntu (WSL) system, in your Windows download directory:

WSL paths that start with /mnt/c, where c may be any Windows drive letter, are paths that access files and directories outside the Ubuntu system. As a Windows path, that is:

The easiest way to fix the problem is really to just download the files you need inside the Ubuntu system from your bash prompt. I recommend you fully update the Ubuntu system, then install git in Ubuntu, as well as build-essential which provides useful tools that you need to compile most software from source code. For Python programs, you may not need build-essential; you can omit it if you like, but I suspect you'll end up needing it at some point.

Of course, you will most likely have to install the dependencies first. To do that, just follow all the official instructions. Do all those steps within the Ubuntu system.

I was using VS code within my WSL environment to edit the bash script. Changing the setting from "CRLF" to "LF" on the bottom right corner fixed it for me. 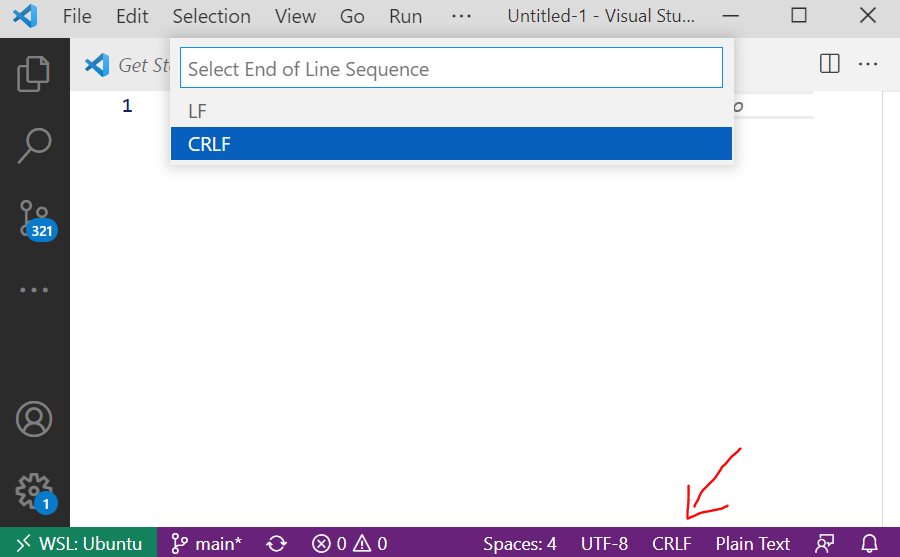 I ran into this issue and the solution was to configure git to checkout specific files in Linux line-ending way.

You can add a file to your git root directory name .gitattributes which configure specific attributes for git (see full documentation).

To configure git to checkout .sh files with LF line ending even on Windows machines.

If you have vim handy, it'll fix you up quick.

Not the answer you're looking for? Browse other questions tagged command-line bash software-installation windows-10 windows-subsystem-for-linux or ask your own question.

0
What causes a directory to have permissions of d?????????, an owner of ?, a group of ?, and a time of ?, but a name?
6
Windows Subsystem Linux VSCode path
1
Python3 command runs fine in terminal but not in bash script
2
How to change the default directory that WSL Ubuntu terminal (on Windows 10) opens with
7
Access Windows network shares from Ubuntu shell in WSL