Is there an equivalent of Windows' Remote Desktop?

I would like to be able to graphically log in to another Ubuntu machine (the server) from my Ubuntu desktop machine (the client), much like with Windows' Remote Desktop.

The "Desktop Sharing" settings that come installed by default seem to use VNC. VNC is a bit of a bandwidth hog, can only work at the resolution of whatever screen is attached to the host, requires you to log in at the machine itself, and mirrors every action on the host.

I know about X tunnelling, but that's annoying to use and doesn't always work properly (or, more accurately, some apps don't work properly).

Is there any kind of tool in between the two, similar to Remote Desktop used for Windows? Specifically, something with the following features:

I've been using X2go for a while, but unfortunately it no longer works fullscreen on Gnome 3 due to a couple of bugs (#1072 and #982), so if there's a better solution out there I'd like to try it.

In general, xrdp will do what you want. And is compatible with many RDP clients out there.

The drawback is that Unity, the default WM in Ubuntu, no longer supports it. I believe, although I've never tried it, that it works with GNOME.

For my personal use, I just installed MATE desktop (as it has less "flair" then GNOME) and configured Ubuntu to use that whenever remotely logging in.

See here for information on setting it up (This answer uses XFCE for remote-desktop. You may choose something else):

I would recommend X2go. It's very similar to RDP and highly efficient even over low-bandwidth, high-latency connections. Clients for all systems, including a plugin for Firefox, etc. It works over ssh and integrates with PulseAudio so you can use VoIP, for instance. Read more on http://www.x2go.org

The x2go client requires a session command to execute upon logging in. For example, to use Unity 2D, use the session command: gnome-session --session=ubuntu-2d. This was found by looking in the file (on the host) /usr/share/xsessions/ubuntu-2d.desktop and copying value of the Exec=... line. If you want to use some other session, you can use the value from another file in /usr/share/xsessions/, but it seems that anything requiring 3D acceleration will not work.

This is a Chrome extension by google, which installs a plugin in chrome for enabling remote desktop sharing. The sharing is much simpler compared to other solutions, and is easy to setup. 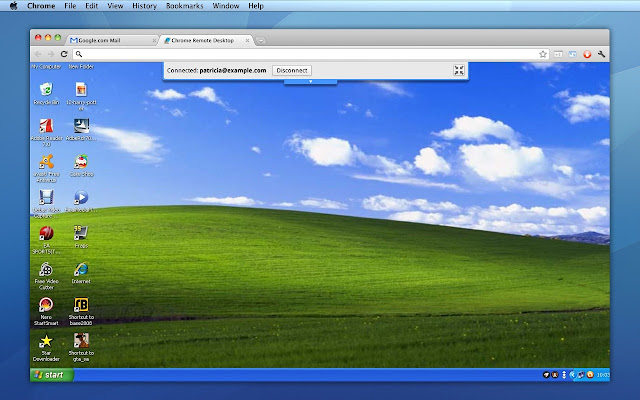 Chrome Remote Desktop BETA allows users to remotely access another computer through Chrome browser or a Chromebook. Computers can be made available on an short-term basis for scenarios such as ad hoc remote support, or on a more long-term basis for remote access to your applications and files. All connections are fully secured.

I used it some time ago. It worked flawlessly.

I use NoMachine's free client (and server). They have repos which makes it easy to install. It works like a charm.

By installing and running x11vnc on the remote we will have access to far more options than with vnc (see manpage for x11vnc). Still you have the advantage of staying within the vnc architecture.

I advise you to use X11RDP. I gives you the best performance and it is Windows compatible. You can logon from Windows (or Ubuntu) into Ubuntu.

Refer to this question for more information.

Spice http://www.spicespace.org/ might be interesting, though it's focused on virtualization.

The Spice project aims to provide a complete open source solution for interaction with virtualized desktop devices.The Spice project deals with both the virtualized devices and the front-end. Interaction between front-end and back-end is done using VD-Interfaces. The VD-Interfaces (VDI) enable both ends of the solution to be easily utilized by a third-party component.

Here is a link that details the install for Ubuntu http://docs.cslabs.clarkson.edu/wiki/SPICE

First, RDP is Microsoft protocol
and VNC is alternative protocol

As of 2017 Unity - Ubuntu desktop environment does not go well with xrdp library to enable RDP,
so one need to install/use other desktop environment like gnome, xfce4
or uses one of many variation implementing VNC protocol, that can be worth or better than RDP for every particular case.

With both Fedora 27 and Ubuntu 17.10 defaulting to a Wayland Gnome 3.26 session by default now the x2go solution isn't going to work.

According to this x2go compatibility page, x2go stopped supporting Gnome at version 3.12.

Gnome doesn't seem to mention remote desktop support in the 3.26 Release Notes but I was able to find mention of it in Gnome bug 784199.

Here is a link to the Gnome Remote desktop and screen casting in Wayland wiki page. I hope this information helps some people who are looking for a more up-to-date answer to this problem.

I use TeamViewer. Allows intermixed Windows/Linux.

I believe that xrdp is the best RDP server for Ubuntu 16.04.

It works on Ubuntu and on Raspbian so I can control all of my data-loggers as well as my Ubtuntu server, from both the Ubuntu laptop and the Windows machines.

Windows Remote Desktop from my WIN7,8,10 systems works flawlessly with it.

remmina is the primary RDP client I use from my Ubuntu laptop.

It has a great tabbed interface for making connections to multiple servers.

Putty does a decent job as a Ubuntu ssh clinet, both terminal and/or GUI.

It is not exactly like Windows Remote Desktop, but it actually works pretty well.

To run GUI applications go down to the ssh section and check the box for X11 Forwarding.

Note that if you use a Windows box as the client then the same can work but you first run Xming before running PuTTY.

Not the answer you're looking for? Browse other questions tagged software-recommendation remote-desktop or ask your own question.

142
Can I access Ubuntu from Windows remotely?
18
Remote Desktop similar to Teamviewer?
5
VNC Alternative
2
How to install and configure X11RDP?