What do snap, snapd and Snappy refer to?

I understand (broadly) how snap packaging works. But what precisely do each of "snap", "snapd" and "Snappy" refer to?

It seems like "snap" refers to many things (package format, terminal command...), "snapd" is a specific tool and "Snappy" is no longer used [1] [2]?

[1]: The only official mention I could find was the title and URL of this Ubuntu desktop page: https://www.ubuntu.com/desktop/snappy

[2]: As I recall Ubuntu Core used to be called Snappy Ubuntu Core, but this is no longer the case: https://developer.ubuntu.com/core 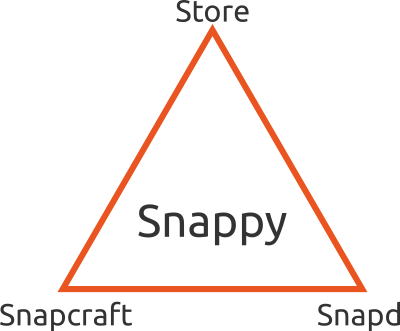 This entire system is sometimes referred to as "snappy". Confusingly, I'm also seeing it more and more often referred to as "snapcraft". While snaps run on normal Ubuntu (and indeed a variety of other Linux distributions), Ubuntu Core is an operating system based entirely upon snaps (no apt whatsoever). Unfortunately, there was already an "ubuntu core" that was the basic rootfs of Ubuntu, so to differentiate, it was called "snappy ubuntu core." The old core was recently renamed to ubuntu base, which is why you see "snappy ubuntu core" less these days.

Snappy is a software deployment and package management system originally designed and built by Canonical for the Ubuntu phone operating system. The packages, called 'snaps' and the tool for using them 'snapd', work across a range of Linux distributions and allow therefore distro-agnostic upstream software deployment. The system is designed to work for phone, cloud, internet of things and desktop computing.

"Snap" application packages of software are self-contained and work across a range of Linux distributions. This is unlike traditional Linux package management approaches, like APT or RPM, which require specifically adapted packages per Linux distribution on an application update and delay therefore application deployment from developers to their software's end-user. Snaps themselves have no dependency on any external store ("App store"), can be obtained from any source and can be therefore used for upstream software deployment. When snaps are deployed on Ubuntu and other versions of Linux, the Ubuntu app store is used as default back-end, but other stores can be enabled as well.

Developers can use snaps to create command line tools, background services as well as desktop applications. With snap application, upgrades via atomic operation or by deltas are possible.

In June 2016, snapd was ported to a wide range of Linux distributions to enable snaps to be used across any Linux distribution, not just the all-snap Ubuntu Core. snapd is also available or in progress for Arch Linux, CentOS, Debian, Fedora, Gentoo Linux, OpenWrt, openSUSE and Red Hat Enterprise Linux. Each distribution is able to interpret the snap metadata to implement the security or other expectations of the snap in a distribution-specific fashion.

Not the answer you're looking for? Browse other questions tagged snap terminology or ask your own question.

89
What is Snappy Ubuntu Core?
20
Failed to start Snappy Daemon

0
Snappy sharing resources and updates
8
Is it possible to have full hard drive access with a snap?
11
Snap (snapd) hello-world example not working (path not found?)
0
Java Application in snap / snappy / snapd
46
Why would I want to install a snap if I can install via apt instead?
0
Problems with snapd and ubuntu-snappy-cli in Ubuntu 16.04
18
Why have Canonical installed core Gnome apps as Snaps by default?
1
How to know what snapd is downloading and when will it finish?
0
Remove snap-store without removing snapd