I'm noticing that the Startup Disk Creator that ships with Lubuntu 16.04 LTS has persistent storage feature missing, and does something to the pen drive that wasn't happening earlier. (I have previously the tool in Ubuntu 12.04). 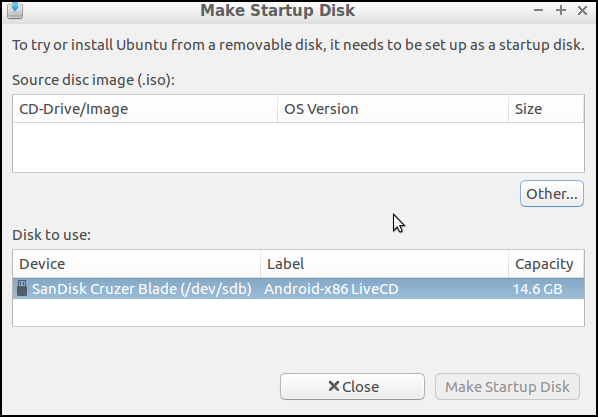 In either case, the USB now has a much smaller partition having just the OS, and it's read-only. The remaining space (15GB in my case) is unpartitioned, and if I try to create a second partition there to use that excess space to store my files, it errors out. Both in the Disks utility as well as in GParted. 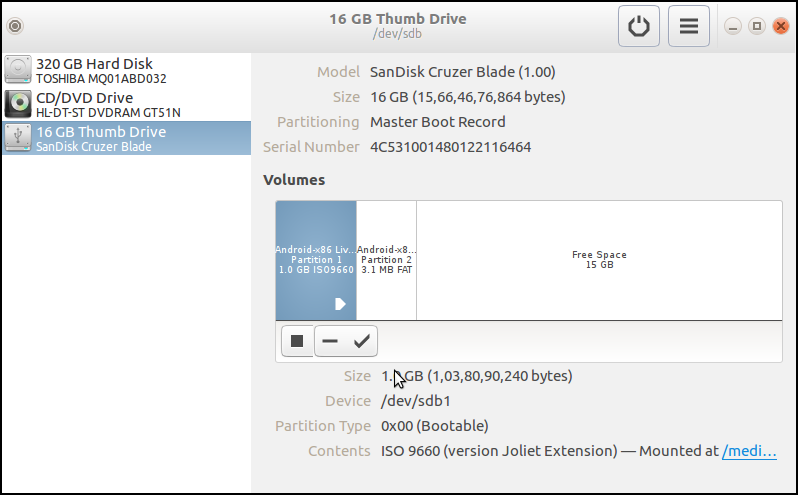 The last time I had used this utility,:

This allowed me to use the same USB stick for carrying my data, AND as a live OS in case needed anytime. This functionality has been broken. My questions:

Addendum: See screenshots of the application from earlier years here.

Edit, 8.Oct.17 : Thank you, good to know there's a solid reason behind the change. Still, the drive goes invisible (not mounting when inserted) when written with a Lubuntu ISO and I think that's a bug. Normal users will simply be led to believe that the USB is toast. If possible, can someone get the program's developers to put this info on the application behind a help button or so? And the program has to explicitly warn the user that the USB will NO LONGER be a USB after the operation; that it will be like a read-only CD, that all excess space will be rendered unusable by this operation. At present the lack of even a help button on the application is deceptive. Also, I don't think the removal of previous buggy nature has led to a solution. I'd call this a taking a step back until the matter is resolved. If anyone can suggest where I should go to file these issues so that the developers involved can be reached, that would be great. Thanks again!

Edit, 22.Oct.17 : I'm using UNetBootin now, made and installed quite a few times using that, quite happy with it! It doesn't hide your pen drive, you can use it to store other stuff which doesn't interfere with the live OS as long as you don't alter the live os's files and folders.

Question 1: Is the case that I have described here, same in all 16.04 distros of Ubuntu and derivative flavors? Or is it just Lubuntu that is having this issue? Or is it just my system that's doing this?

Answer 1: Yes, it is the same in standard Ubuntu and all Ubuntu community flavours, introduced with Ubuntu 16.04 LTS.

The old Ubuntu Startup Disk Creator was extracting the content of the iso file and trying to create a boot structure. It was notoriously buggy for years, because it was affected by modifications of the boot system between different versions of Ubuntu.

At the same time all the current Ubuntu iso files are hybrid iso files. It means that they can be used to burn DVD boot disks as well as to clone USB boot drives and memory cards. Cloning is a very simple and reliable process, where every single byte is copied as is from the source to the target.

So a new version of the Startup Disk Creator was developed and introduced with Ubuntu 16.04 LTS. This version is a cloning tool. The resulting USB boot drive will have an iso9660 file partition table and file system, which is read-only. Therefore it is not possible to make a persistent live drive with this method in Ubuntu 18.04 LTS and previous versions.

With Ubuntu 19.10 it is possible to clone a [slightly modified} iso file and add a partition for persistence behind it, because of a new feature alias squashed bug.

See How is it easier to make a persistent live drive with Ubuntu 19.10?.

Question 2: How do I fix this and get the older Startup Disk Creator back?

Answer 2: Don't try to get the old and buggy Startup Disk Creator back.

I would recommend that you use the current cloning Ubuntu Startup Disk Creator, when you want a live [live-only] Ubuntu USB drive or simply an installer (to install Ubuntu into another drive). This would be the standard case.

When you want a persistent live drive, you can use another tool, an extracting tool, that creates a partition table and file system(s), that can be mounted with read and write permissions. Or you can do it yourself rather manually, if you want to be independent of tools.

20
How is it easier to make a persistent live drive with Ubuntu 19.10?
9
USB Startup Disk Creator Block Size Problem
5
What will happen to i386 software since Ubuntu will drop support to i386 ISOs?
6
How to create a bootable usb stick that is not read only
0
How to umount usb drive?