Ctrl+Alt+Arrow (switch workspace) won't work even if workspaces are enabled. Instead, it seems to have other effects in several programs

Until yesterday, doing CtrlAlt→ (or any other direction) would switch workspaces.

Today, even if workspaces are enabled (Settings>Appearance>Behavior hasn't changed, and also SuperS displays the workspaces wall), it doesn't work anymore. CtrlShiftAlt→ (or any other direction) doesn't work either. Clicking on the launcher icon of a program already open on a different workspace doesn't take me to that workspace (it doesn't do anything really).

Just to rule out problems with each of the keys, CtrlAltT (for summoning a Terminal) works, and the arrows work.

At the same time, these key combinations started having other effects depending on the program I'm using. In Gnome Terminal, they will print D, B, C, A (using CtrlAlt + ←, ↓, →, ↑ respectively). In Eclipse, the CtrlAlt+ either ↓ or ↑ will duplicate the current line.

I'm using Unity on Ubuntu 16.04 and I don't use any customization tool like gnome tweaks or ccsm: they were never even installed. My keyboard layout is English (UK) and always has been.

I'd like to know how to restore the expected behaviour, and possibly also what could have caused this, since I don't remember changing any setting from yesterday to today.

Edit: I've just tried to use workspaces on a guest session, and they work as expected (I can switch workspace using hotkeys). So the problem must be in my user's settings, even if I still can't think of anything I've done to trigger this.

What would be the smallest amount of configuration files I should backup and remove to see if normal behaviour is restored?

[[ Edit3: apparently neither removing.config nor .local fixes the issue! ]]

Edit2: the key shortcuts are still listed in Settings>Keyboard>Shortcuts but don't work. I've also tried the SuperHome alternative, but it doesn't work either.

It doesn't even work if using the on-screen keyboard!

You can resolve this issue by using dconf-editor. It's available by first enabling the universe repository and then issuing the command sudo apt install dconf-editor After which you can launch it from the applications menu. See below for the relevant section: 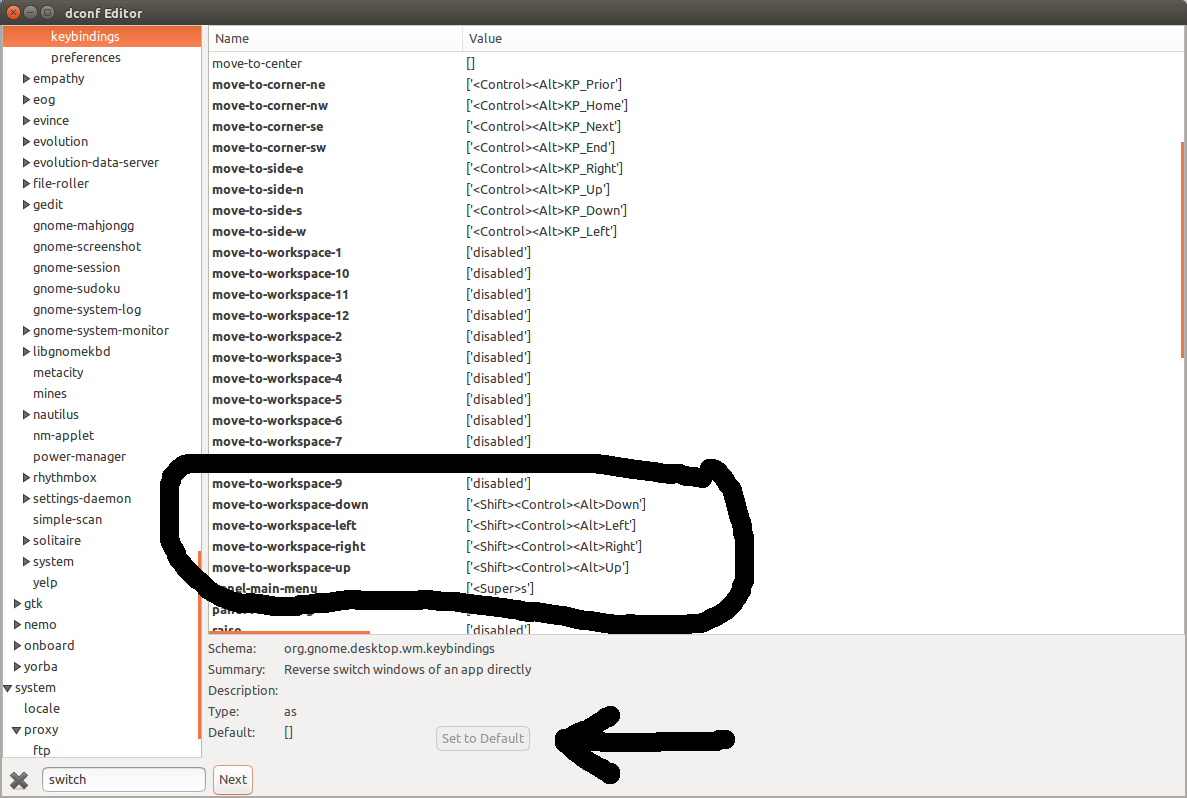 Navigate in the left hand column down to wm, click the arrow that points to the right to expose and then select keybindings. Scroll down the right window to expose "move-to-workspace-down", select it and click the Set to Default button. This should set this binding to ['<Shift><Control><Alt>Down'] Repeat this process for the next 3 entries which correspond to left, right, and up. The changes should take effect immediately. If not, reboot.

kudos to @doug for this comment which pointed out the right place to look.

This solution restored the functionality, although it threw the baby out with the bathwater and didn't help to identify the cause:

If you want a hatchet approach, open ~.config/dconf and rename user to user.bak

240
How do I enable the "Universe" repository?
2
Workspace switcher shortcuts do not work anymore and new windows will be placed under launcher

0
Workspace Switcher doesn't match workspace settings
2
I have remapped super+L but it still locks my screen instead of doing what I want
6
Keyboard shortcut for switch to workspace 11 doesn't work
14
Workplace switcher stopped working in Ubuntu 16.04
4
Cannot switch workspace with shortcuts
5
How can I create a shortcut to cycle through workspaces in GNOME 3?