NVidia: Better performance with nouveau drivers than with proprietary drivers?

I'm testing an Asus UX430UQ under Ubuntu. It has an NVidia 940MX graphics chip in it. I'm using Lightworks to benchmark performance, and the numbers are coming up heavily in favour of the open source nouveau drivers over the proprietary ones in 4 of the 5 benchmarks.

I ran a bunch of tests with each of the drivers enabled (rebooting after switching the driver), discarded outlier values, and averaged the results of each benchmark for each driver.

I've also found that real performance during playback of a particular section of an edit is noticeably worse with the proprietary drivers: there are some occasional dropped frames and audio glitches like I experience when playing the same section of that edit on my 2012 MacBook Pro.

EDIT: Based on @Ken's suggestion, I checked the PRIME profile in NVIDIA X Server Settings. It had been set to NVIDIA. Switching it to Intel (and logging out and back in) and running the Lightworks GPU benchmarks again gives results that closely match the open source result, suggesting that the nouveau drivers were simply using the integrated graphics:

I suppose some of these results make sense — host to GPU and vice versa, at least, should be fast since the chip is integrated into the CPU; better shader performance from the NVidia chip is to be expected. I would have thought that dedicated graphics would be faster for the render test, though.

In your NVIDIA X Server Settings, you should have a window that looks like this which will let you change which GPU you use: 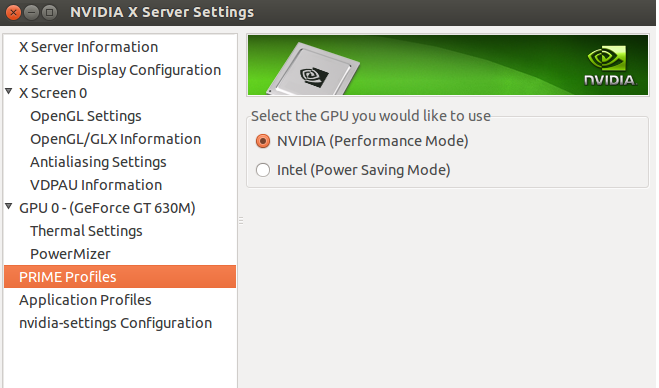 I believe you would need to log out and back in in order for the change to take effect.

Not the answer you're looking for? Browse other questions tagged nvidia graphics additional-drivers or ask your own question.