I tried the following steps after the install to allow me to use a higher screen resolution, but none worked:

This failed with unmet dependencies, including xserver-xorg-core, so I did:

Restarted VM. But now the VM starts up in an even smaller resolution (800 x 600?) and when I mouse over it the cursor disappears! Also, keyboard input is now ignored.

Does anyone know (a) how I can interact with my VM again and (b) allow me to have a larger maximum screen resolution? I don't care whether the screen re-sizes automatically; I just want a larger resolution so my VM is usable.

EDIT This isn't a duplicate of How to install VirtualBox Guest Additions for Ubuntu 16.04 because that says to install the latest version of VirtualBox. Here's the error I get when I installed vbox 5.1.28 and try to start one of my ubuntu VMs: 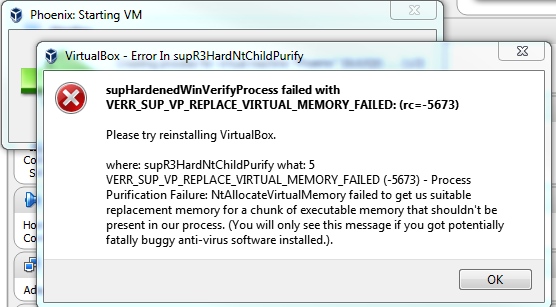 AFAIK Where I work no-one's ever succeeded in running an ubuntu VM on a version of VirtualBox > 4.3.12. Possibly due to a clash with corporate antivirus software as the error implies. Also, I first need to be able to interact with my VM via mouse or keyboard before I can install Guest Additions.

After installing xserver-xorg-core and virtualbox-guest-x11 to attempt to get shared clipboard working with virtual box, although this worked fine at first, upon rebooting I encountered this error where I could not control the machine at all.

To resolve I booted to recovery mode (hold Esc on boot) and ran:

This returned me back to where I was to begin with.

71
How to install VirtualBox Guest Additions for Ubuntu 16.04