How can I change the voice used by Firefox Reader View (Narrator) in Ubuntu? 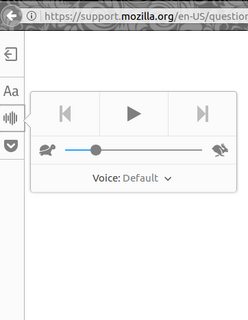 The default voice as well as all alternative voices are very difficult to understand.

I cannot find any documentation about how this feature is wired up.

I managed to use the festival voice as default on Firefox. 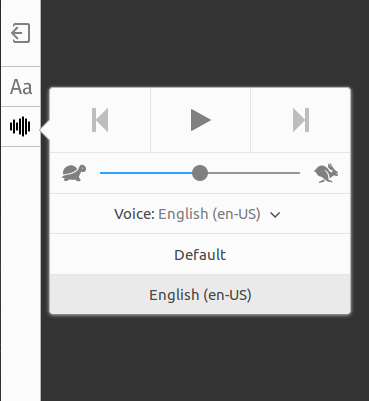 In order to do that, we need to change some configurations on the file /etc/speech-dispatcher/speechd.conf. But first, I need to explain the basic idea of how it works. We can always see what voice is the default one used by speech-dispatcher using the command spd-say:

On Ubuntu, the default Texto To Speech (TTS) voice that comes with speech-dispatcher is espeak. So we hear exactly the same voice when we use this other command:

That happens because spd-say is just using espeak voices as output. And well, Firefox does the same, it uses whatever voice is configured in speech-dispatcher as output to read web pages in the reader view mode (Ctrl+Alt+R).

So, what we need to do here is to change the voice that comes as output in the spd-say command and, once we do that, Firefox is going to use a different TTS voice as default as well. I'm going to describe the process of making it work with the festival voice, but I believe the procedure is the same if you want to run a different TTS voice. First, we need to install festival:

We can test its voice in the command line by typing:

Now we need to change the file speechd.conf. So we type sudo vi /etc/speech-dispatcher/speechd.conf on the terminal and around the line 205 we'll see the following piece of commented configurations:

We need to run festival as a server in order to make speech-dispatcher use it as default. We can do that by adding the following line at the end of the file that's open when we use the command sudo crontab -e:

Now it's done!! After rebooting the system Firefox and spd-say will be using the festival voice as output.

I believe that the procedure to make new voices work in Firefox will be always the same:

What called my attention on that is that there's a module for the Ivona voices there. Ivona is a proprietary product and today the only way to use it (as far as I know) is as a pay-as-you-go service on AWS, but its voices are really good and they sound very natural.

The file /etc/speech-dispatcher/modules/ivona.conf is configured to listen to a server on the port 9123. I think perhaps there's a way to run a local server that gets the Ivona voices using my AWS APIs ( I'm not sure, but perhaps using a part of this Node.js app that's already developed) ... And if that's possible, it means that it's also possible to run Ivona on Ubuntu as the default voice of the system and consequently use it with the reader view mode on Firefox . Although I don't know how to do it now, it looks like an interesting possibility.

The voices used by the narrate function of the firefox reader mode depend on the platform you run it on. On Linux, firefox will use speech-dispatcher to render text to artificial speech.

There is limited support for selecting voices/languages from within the firefox reader GUI, but most settings have to be made on the OS side, which is speechd.conf on linux.

Some settings are available via the about:config dialog if you search for "narrate":

I experimented quite a bit with different settings in both, about:config and speechd.conf, but could not get anything to work but the default that comes with Ubuntu. The feeling I get is that the interface between firefox and speech-dispatcher is not very stable, but maybe you are more lucky experimenting.

This guy: https://bbs.archlinux.org/viewtopic.php?id=217411 seems to have had more success on Archlinux configuring things to use festival as output. I tried to reproduce this on Ubuntu 18.04 but could never get firefox to run with it.

Thanks to Rafael Muynarsk to answer for kickstarting me. Here is what I did

Without it I got only some syntences.

Then go to reader view mode and try it.

Now, the default, indistinguishable voice will be replaced by a reasonable one that works for offline files. Happy listening!

For RhVoice (the best offline voice for Linux in my opinion):

It may be necessary to reboot your system/firefox.

Here is a quite involved workaround for a related problem I had: On a site which was clearly written in German but contained some Japanese and Chinese letters Firefox only showed me countless of Japanese voices.

What did I do? I opened the Inspector and changed one of the occurrences (the first one) from urn:moz-tts:speechd:Japanese* to urn:moz-tts:speechd:German?de. That was all that was needed to have Firefox read it in German to me as it should have done in the first place.

Unfortunately none of my attempts to research this topic further came to any fruition, I'm just getting mediocre search results suggesting proprietary extensions. I will keep this around and hope that someone finds time to report and solve this bug before I do, because I think I have to dig deep and do more research until I find the appropriate terminology so that people understand what I'm reporting.

Not the answer you're looking for? Browse other questions tagged firefox text-to-speech or ask your own question.

5
How to install MaryTTS on Ubuntu?
1
How to use Firefox narrate with Mbrola
0
Speech Dispatcher not working after changing voice to Festival

5
How to get a proper Firefox History view?
0
How to set a custom page to replace the default Firefox New Tab page
0
Firefox will not permit me to change the default search engine
1
Improve sound (not voice) quality of Pico2Wave text-to-speech
0
How do I force Firefox to immediately stop displaying the current page while loading the new page over it?
8
Wine: How to use SAPI 5 voices for TTS application “Balabolka”?
0
18.04.1 desktop: How to install the 'Fiona' voice that is present in the Festival TTS demo page
2
Replace my voice in video recording with a TTS generated speech