I created an encrypted 2TB boot drive using the standard method from an Ubuntu 16.04 LiveUSB.

I am trying to access that 2TB drive from another system (also Ubuntu 16.04.3) which is running from 1TB encrypted boot drive. When I connect the extra (2TB) drive, I am prompted for the password, which I enter correctly, and I get no other message. Everything seems fine.

I look in Nautilus and all I see is the little 511MB boot section of the 2TB drive.

I open Disks and I see the 2TB drive and the graphic shows the following:

The problem is that I do not seem to have access to the large 2TB partition, just to the little pre-boot area.

I tried to mount it using:

I got an error:

As you might guess, I am quite new to Ubuntu. I might be missing something quite simple but it does seem it should be easier to access this drive.

What can I do access the main partition on this 2TB drive?

How to Mount an Encrypted Partition at Startup via GUI

1. Connect your device and run Disks:

2. Select the device, select the encrypted partition. Don't unlock it yet. From the 'Gears' menu select Edit Encryption Options: 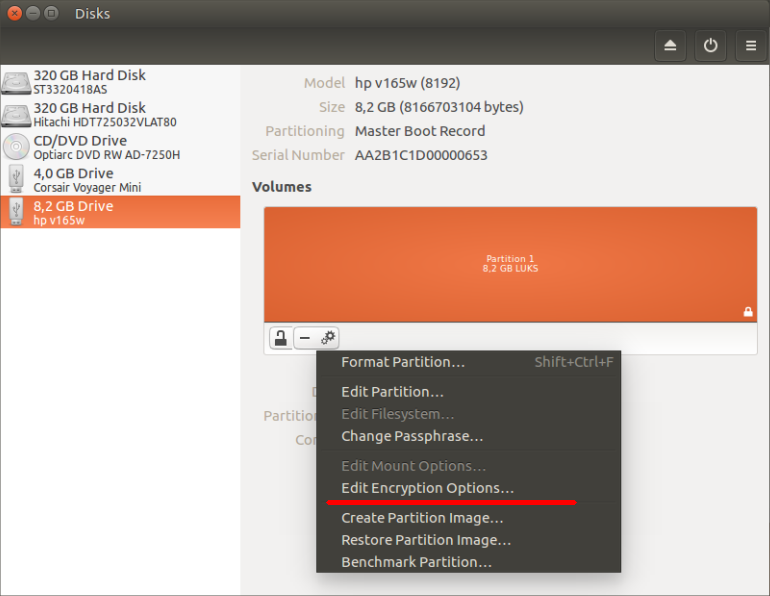 3. Into the dialogue box Encryption Options: 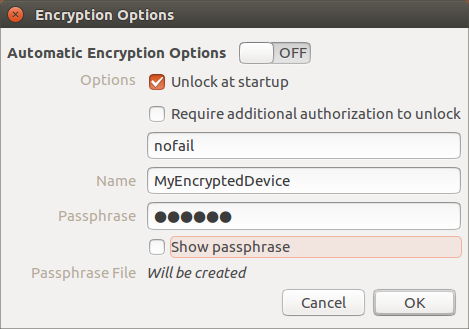 4. Click on the 'Padlock' icon to unlock your encrypted device: 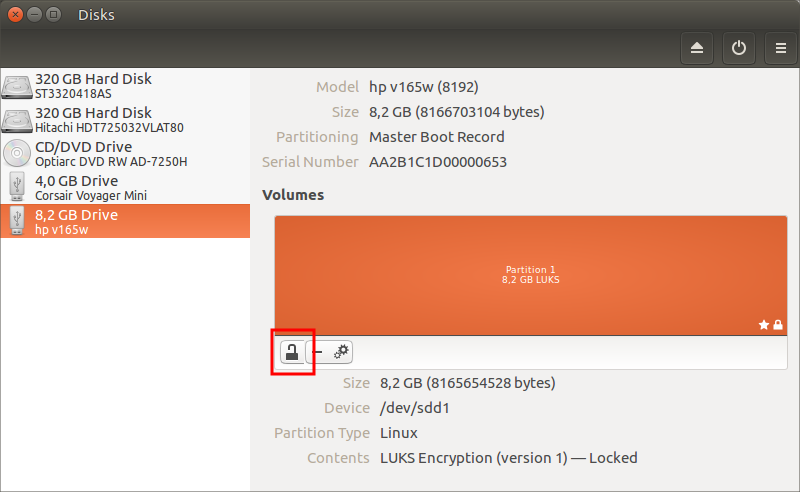 5. Now select the partition (the inner part) and from the 'Gears' menu select Edit Mount Options: 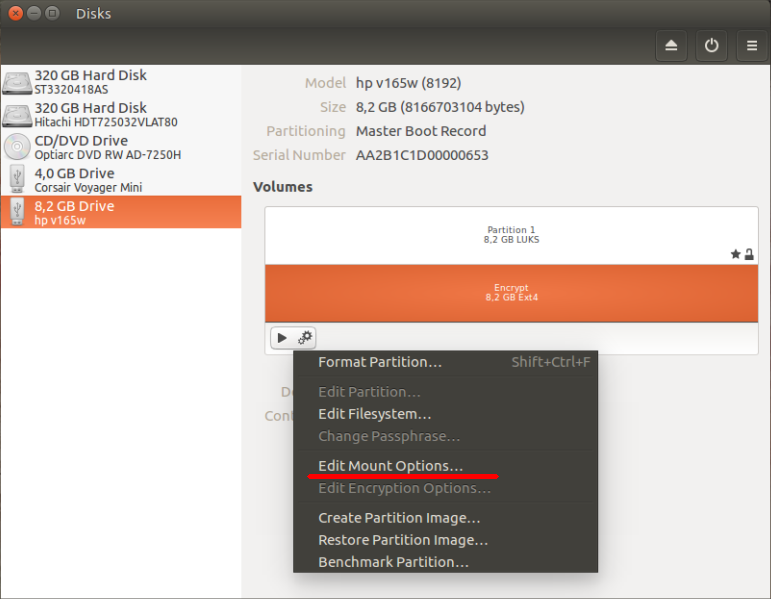 6. Into the dialogue box Mount Options: 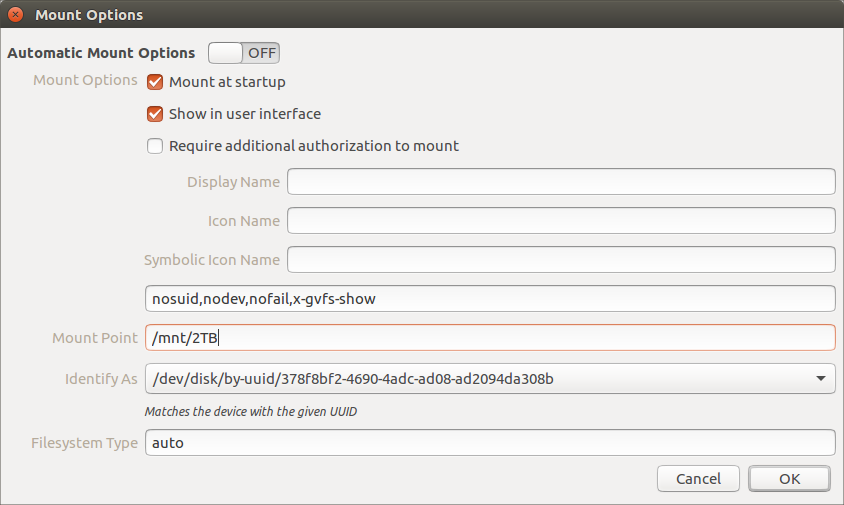 7. Now press the 'Play' button to mount your device: 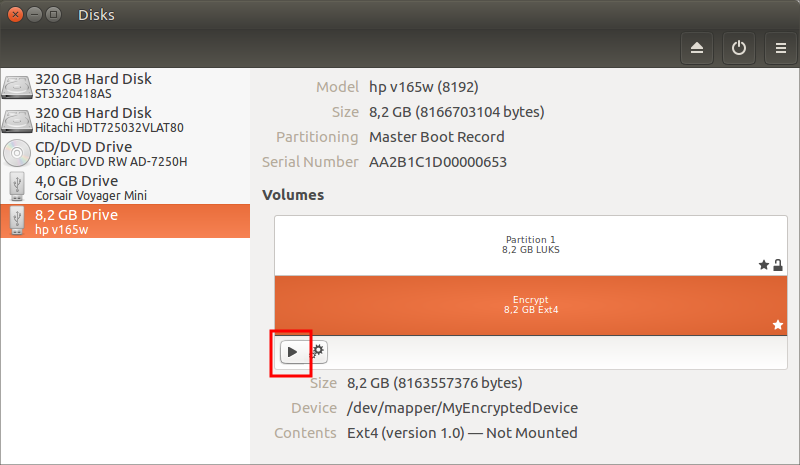 8. Close Disks and restart the system to check the result.

You report having been asked for /dev/sdb5 password and entered it without error message or being asked for a second time. If that worked, but you partition just didn't get mounted, then there should be a new device in /dev/mapper/, like a symlink /dev/mapper/sdb5_crypt pointing to /dev/dm-0. If so, you can use sudo mount /dev/mapper/sdb5_crypt /mnt/2tb to make your data accessable. I'm not doing these things often enough to know by heart, wether or when Ubuntu 16.04 mounts work automatically, when they work halfway automatically and when Ubuntu doesn't do anything automatically.

If /dev/dm-0 or similar doesn't exist, you might want to read the answers in Mount encrypted volumes from command line?, which I won't repeat here.

the first attempt didn't provide a location so ubuntu searched /etc/fstab for where to mount it & reported it's not there correctly.

your later attempted mount commands tried to load '/2tb' device onto directory '/dev/sdb5' which IS A SPECIAL DEVICE - the error message is correct.... ie. your mount params [here] are in the wrong order.

140
Mount encrypted volumes from command line?
38
mount unknown filesystem type 'lvm2_member'
20
Mounting encrypted LUKS partition from Live CD
3
How to rename volume group of an encrypted boot drive and have it still boot?
2
lvm2 pv format option is grayed out in gparted
1
Accessing one encrypted boot drive from another in 18.04