I have text file containing 14000+ lines. it contains some data I am using for data training of speech recognition.

I created that file via coding of java and due to some semantic error a few of the lines are empty. Every time I run training it gives an error after about 30 minutes complaining that there is a empty line.

Is there any code/script/command which can give me list of line numbers with empty lines, so I can fill those empty lines and save my time?

I will input a file.txt and it will give me 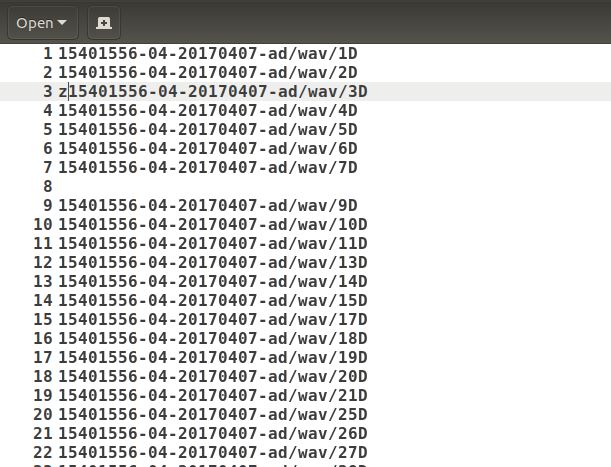 You can find the empty lines, and their line numbers, with

If your "empty" lines contain blanks or TABs, use:

sed will report the line number with the = command, so you can use this expression to report line numbers of empty lines (lines with nothing between ^ (start of line) and $ (end of line)):

We use the -n option to suppress printing the stream (line numbers are printed separately from the lines themselves when we use =, so there is no p command here), so the only output is line numbers of the matching lines.

Here's an example to show how you can get the user interaction you wanted. You could use any solution in place of the sed expression in these structures...

You could save as a script (I'm naming mine empline):

You could skip the read line and replace "$REPLY" with "$1" to use the filename as a positional parameter (so run ./empline foo). To simplify usage, you could make a function and add to the end of your ~/.bashrc:

This takes the filename as argument:

The method for multiple file input (see end of post) is the most robust.

The BEGIN section runs before the input file is processed.

ARGV[1] is the name of the input file. This corresponds to awk's FILENAME variable, which does not work in the BEGIN section.

NR is the input file's line number currently being evaluated. NR does not reset to 1 if additional input files are specified on the command line.

The END section runs after the input file is processed. In this example, it terminates the output cleanly by printing a Unix-style newline character.

It's a bit sloppy to use a string name without first setting it, even if you initially want it to be empty. You could explicitly set the sep string to be empty in the BEGIN section:

FNR is similar to NR, except that the FNR line number counter resets to 1 at the start of each file.

The section FNR==1 && NR>1 { printf "\n" } causes each file's output to print on a separate line. It prints a newline character when the first line of each additional input file is processed, but not for the first line of the first file.

Or you might prefer the Bash equivalent of the Python solution using enumerate():

Iterating over the enumerated (start == 1) lines of the file, and printing the line number when empty:

For a single file run:

Not the answer you're looking for? Browse other questions tagged command-line text-processing or ask your own question.

0
What is the sed comand to fix this file so second to last boolean is converted to opposite
0
How can I count lines of differently named files, and write the outcome to a csv file?
0
using sed to loop through records in a file and use grep on all records
0
Find file with time range fileA and fileB
16
Delete lines that come after a line with a specific pattern in Shell
1
Remove lines starting with "string1" and NOT containing "string2" with sed
0
split a text file to what's before and after a given pattern
0
How can I assign variables from file into a bash script and write a specific loop for it?