How to install dockbarx?

I just need a link to install dockbarx that's all please could someone help me.

http://gnome-look.org/content/show.php/DockbarX?content=101604 this is what you need. nit also has extra themes enjoy.

Have you tried the main WebUpd8 PPA? To add it and install DockBarX, use the commands below:

To also install the AWN applet, use:

Since DockBarX used to be a GNOME 2.3x panel applet which isn't available anymore in Ubuntu 11.10, I assume you either want to use it as an AWN applet (see above) or stand-alone. To use it as a stand-alone dock, press ALT + F2 and type: "dockx". 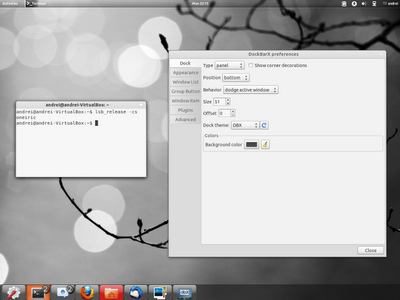 DockBarX 0.39.7 was released more than a week ago and you could already install it in Ubuntu Lucid from its official PPA, but we've uploaded Karmic and Maverick packages too in the WebUpd8 PPA.

DockBarX 0.39.7 comes with some cool new features such as:

And to also install some extra themes:

To also install the AWN applet:

Not the answer you're looking for? Browse other questions tagged docky or ask your own question.

0
How to run docky in 3d mode?
2
How to make/use launcher?
0
Gnome-shell hide “Dock”?
1
How to remove the reflection in Docky?
0
Error while starting docky
1
Create a file with root access and make it executable?
1
How to make docky vertical?