I have a lenovo ThinkPad T410, running Xubuntu 16.04 up-to-date. there are 4 buttons for volume/sound control:
1. Mute speakers - It's working, but it has a red LED which should turn on when muted, but doesn't turn on.
2. Speakers volume down - working
3. Speakers volume up - working
4. Mute mic - indicator LED and the button both aren't working.

The problem is only in Xubuntu. I made a live USB of ubuntu 16.04 (not xubuntu), and from there, all those buttons are working.

How can I get these to work?

EDIT:
I have tried Kubuntu and budgie-remix too. The problem persists in Kubuntu too, but budgie-remix works.

Found out the solution myself:
For the mic mute button:
1. Open settings -> From "Hardware", select "Keyboard" -> "Application Shortcuts"
2. Click on "Add" 3. In Command, Type this: amixer set Capture toggle 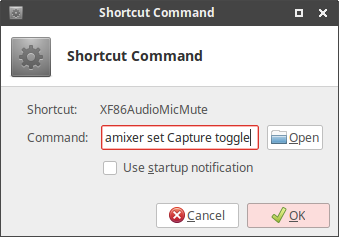 4. Click "OK" -> Press the mute button.
5. Done. Now when pressed, the mic will be mute-ed, and the indicator LED also turns on.

For the trackpad disabling:
Repeat the same steps, except, instead of amixer set Capture toggle as the command, use this guide to get the command: https://askubuntu.com/a/67724/511354, and of course, press the trackpad-disable combination instead of min-mute key

Not the answer you're looking for? Browse other questions tagged 16.04 sound xubuntu keyboard thinkpad or ask your own question.

240
How to disable the touchpad?