--gamma red:green:blue Set the specified floating-point values as gamma correction on the crtc currently attached to this output. Note that you cannot get two different values for cloned outputs (i.e.: which share the same crtc) and that switching an output to another crtc doesn't change the crtc gamma corrections at all.

--brightness brightness Multiply the gamma values on the crtc currently attached to the output to specified floating value. Useful for overly bright or overly dim outputs.
Note: his is a software only modification, if your hardware has support to actually change the brightness see this answer.

Also: How to change LCD brightness from command line (or via script)? 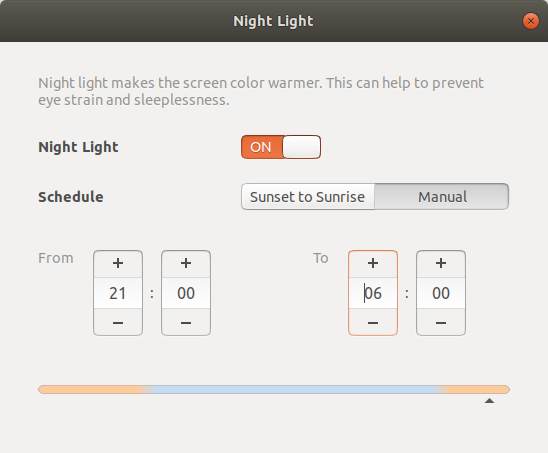 I really like the xcalib calibration tool. I use this value

19
Red Filter for Screen
0
Adjust color temperature with Intel HD graphics
1
Screen tint/filter software?
1
looking for a dyslexic colour tint for my screen
1
Is there a program that adjusts the screen color depending on the time?
1
Is there a app like Flux for the Ubuntu Touch?
205
How to change LCD brightness from command line (or via script)?
11
Automatically adjust display brightness based on sunrise and sunset
6
Can't adjust brightness on my laptop
2
Dell Inspiron n5010 Brightness Issue
See more linked questions

3
How do I best enable Xinerama?
3
Adjust brightness and contrast on an Acer Aspire as5750?
9
How to adjust contrast with xcalib
3
Is there a way to make Ubuntu adjust the screen brightness automatically?
1
Change contrast/gamma in external monitor
1
Can't adjust screen brightness ((
0
Two display monitors instead of built-in display