I have used pc for 7 months without errors. I have a gpt partition table and a Bios. During my installation I made a 2 Mb grub_bios partition. This evening using gparted I noticed that that partition is marked as unknown and bytes are used. 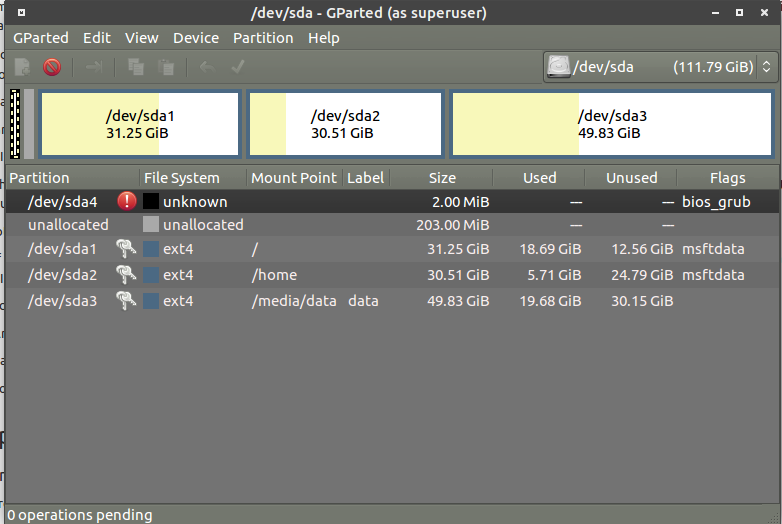 Now, having only Ubuntu on this pc I don't get errors, but If I would install an other OS, could I get errors? In every case, have I solve this problem (how)?

The bios_grub exists for grub2's core.img. With MBR(msdos) partitioning the core.img is written to the sectors just after the MBR and before first partition. With gpt, the protective MBR has no space after it, so a separate partition is used.

Similarly Microsoft uses the sectors after the MBR to write some security info or other info. Grub & Windows flexnet used to conflict in sectors after MBR. That the is eliminated with gpt.

GPT vs MBR. Why not MBR?

Oldfred's answer is correct; however, I want to add a few points:

Overall, the first issue (the incorrect msftdata flag on two of your partitions) is worth fixing right now; although doing so is not critical for an Ubuntu-only installation, it will be a useful safeguard in case you boot a non-Linux emergency tool or if some obscure Linux utility run in Ubuntu makes bad assumptions based on the type code.

If you're happy booting the way you're booting, I wouldn't suggest installing an EFI boot loader at this point, much less converting from GPT to MBR; that would be fixing what ain't broke, as the saying goes. You should bear the linkage of partition table type to boot mode in mind if you decide to install another OS, though.