What editor can I use as a simple vi/vim alternative?

I'm a Windows user coming to Ubuntu's Bash thanks to WSL. Now I need to edit some files and I really hate Vi. Do I just have to deal with it, or is there a simpler alternative?

The features I am looking for are:

I will try to master Vim, but I need to make a quick edit right now!

If you are looking for an alternative editor, you are not alone. Basically life is too short to learn vi and I say this being a software developer for a living. However you should learn how to exit it because it's a problem for one out of 20k programmers. Also performing some basic append/insert operation might be worth learning, because on some stubborn servers you won't find any other editor.

Now, the answer to your question is probably nano.

If you are running some automated build script, using git or running other commands, they might open vim without you wanting it. You can prevent this by running the following before proceeding:

It is a matter of opinion.

vim ("vi improved") has a bit of a learning curve but it is very powerful. See this beginner's guide for vim or any other vim guides or the vim tutorial vimtutor (included in vim).

For now I highly suggest nano

-B makes a backup

Commands are issued with the control key and are listed at the bottom of the editor window. 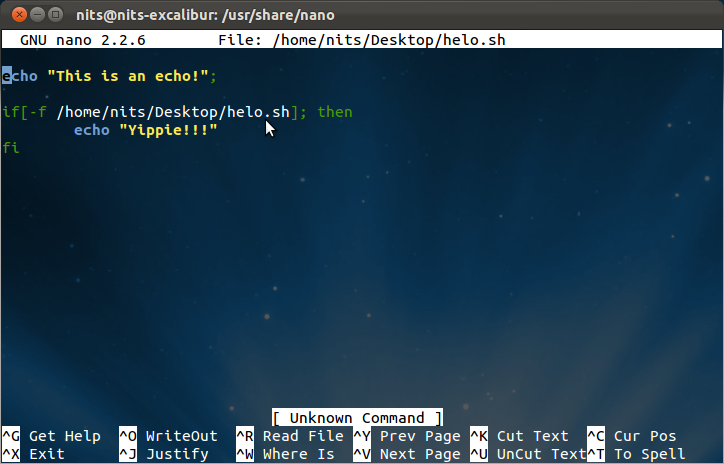 emacs is an alternate to both vim and nano and has many benefits as well. emacs is more complex than nano. You can see emac's tour.

Just for completeness, vim + themes such as Zenburn can be quite helpful 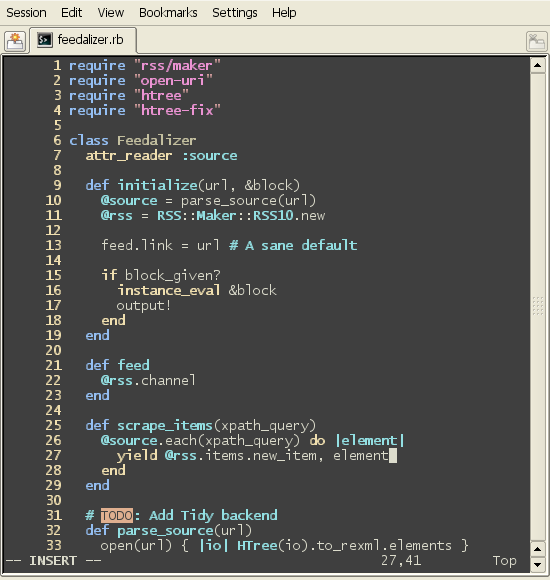 as a windows power user, after trying vim and nano I found out that I need something in between, complexity-wise. so I tried slap and It was the exact thing that I was looking for. 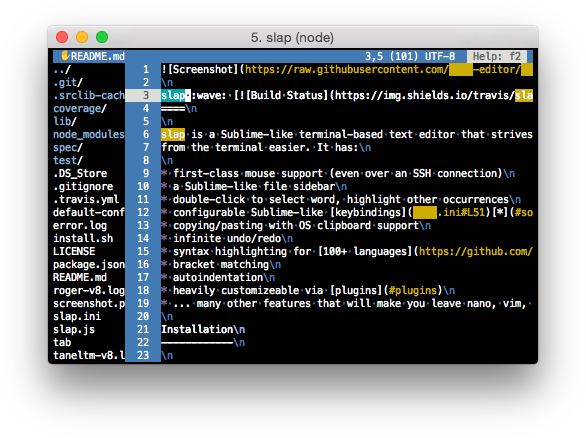 slap is a Sublime-like terminal-based text editor that strives to make editing from the terminal easier. slap has first-class mouse support, even over SSH connection.

Have you ever been frustrated that your text editor wasn’t doing what you wanted? Angered that you can’t remember...

While we're advocating for our favourite lightweight text editors, let me recommend the eXcellent, tiny, and fast xo (exofrills).

It's a single Python 3 file, and it has good support for syntax highlighting through Pygments (although not perfect with non-Python): 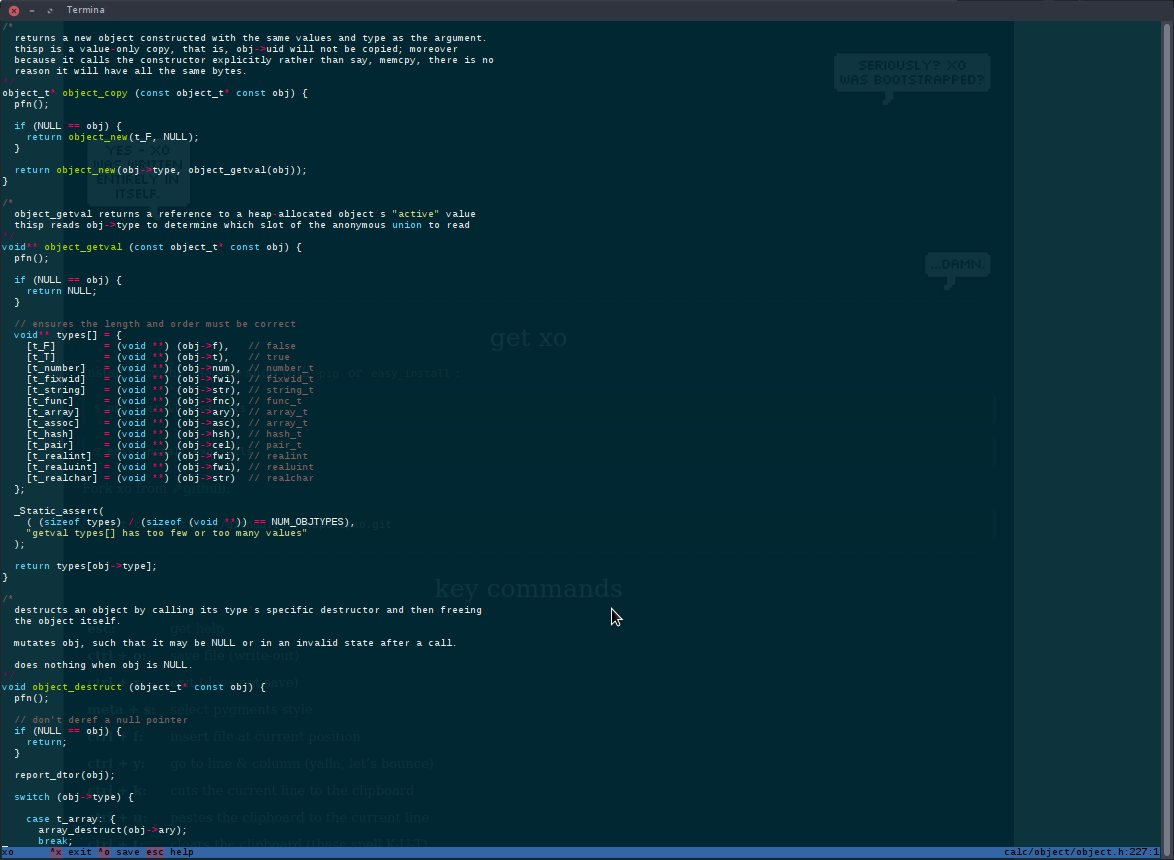 It also has extremely simple and useful key combinations which can be readily and easily changed to your heart's content: 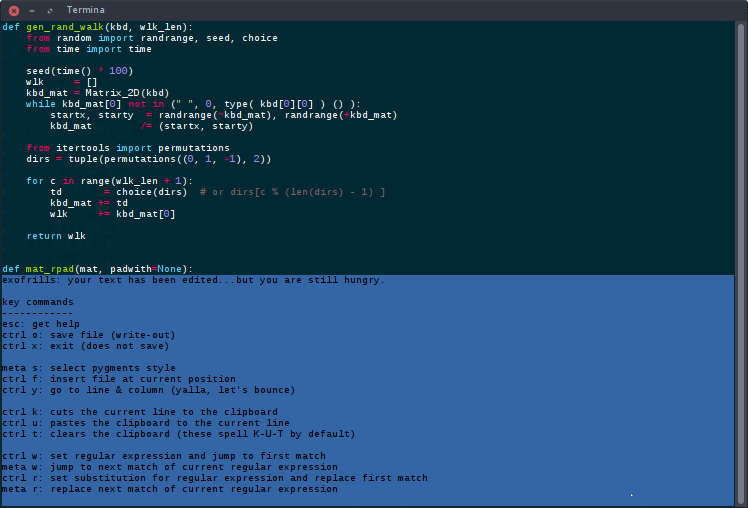 The Python3 source is on github, and you can install it more easily using:

exofrills: your text has been edited...but you are still hungry.

Disclaimer: I am in no way affiliated with the exofrills project.

While I cannot deny that I too struggled with vi in the beginning, I think an argument can be made that vi is actually very simple to learn. (When I began using Unix the choice was either vi or emacs, so at the time I chose ed, ed being a very simple line editor, which I had learned already from reading early Unix textbooks.) I use vi daily, but I probably use only a very small subset of its features.

Here's first an argument for using vi: vi exists on all systems, uses very few resources, and may be usable over unstable and slow connections, where other editors may fail or be slow and unusable. Or in situations where the system is broken, so arrow keys are not interpreted correctly (bad terminfo settings for example.) So vi can be used to fix the configuration files leading to the problem, without being affected by the problem.

And here is how to learn a useful subset of vi: First: stop thinking of vi as an interactive, terminal-GUI "editor", and see it as a programming language for manipulating text files. In the beginning "vi" stood for VIsual mode, and vi has a nonvisual counterpart ex, which is a good place to start. Type ex at the shell prompt (I will use ¬ to represent return):

So, lets put something in it. Type "a¬", and type a line of text, then a period on a line by itself:

That was the append command. Easy, short and mnemonic. But it would be nice to see what is in the buffer:

That was the print command, p, obviously. The % is a line range shorthand. Each command may be preceded by a line number or range which the command should apply to. % means "all lines". $ means the last line, and a period means the current line. A number means that particular line. A range is written n,m and a number can be added or subtracted, so .+1,$-1 mean from the next line to the second-last line. A command consisting of just a line number goes to that line. Here is the remaining small subset of commands I use:

w writes all (or the chosen range of) lines to a file.

q quits. wq writes and quits. q! quits without writing, and in a similar vein, w! forces a write to a file if possible.

Now a cool one:

! as a command filters the lines into a shell command.

enters VISUAL mode. Don't be fooled. It looks like an editor, but it's still just an interactive programming shell. You just get to look at the buffer all the time, and a few more commands. In visual mode a : shows the : prompt from ex mode. The arrow keys (if they work) move around, and if they don't, then hjkl do! h left, j down, k up and l right. 0 moves to the first character and ^(think regex here!) to the first non-space character on the line. $ (regex again!) moves to the end of line. Typing :999¬ goes to line 999, naturally, just like in ex mode.

"i" enters insert mode, which now inserts on characters instead of lines, and ends with pressing escape instead of ".¬". "I" inserts at the beginning, "a" after the character under the cursor, and "A" after the end of the current line. Always press escape when done typing text. "x" deletes the character under the cursor, and "D" deletes from the cursor to end of line. "Y" yanks (copies) the current line, and "P" pastes it back. ":pu" does the same, but can be preceded by a line number. ":ya" is the ex equivalent of "Y", and again, useful to apply to a line range. I think there is a mark command as well, but I will admit I don't remember it. I don't miss it.

The above is what I use, and I know I am probably not a very "efficient" vi user. On the other hand, I do use ex's versatility, for example to script editing configuration files. Need to change your hostname foo.bar.com to www.foobar.com in a number of conf files?

What I am trying to say is, that I think the problem with vi is that people think of it as a difficult editor. All it takes is to change your mindset a little, and view it as a very simple yet also very powerful interactive programming language instead. So powerful that even with a subset of the available commands, you can use it to great effect - not just as an editor but as a general, scriptable tool well integrated with the rest of Unix. I doubt nano would do all of this - emacs...maybe.

This is the (seriously underrated) built-in editor of Midnight Commander. Install:

To edit a file with it, issue

If you like it, update your default editor by running select-editor.

You can try micro

It's natural for people who are familiar with windows.

There are also some rust alternatives. Though not so powerful(But faster.).

tilde is exacly what you look for.

micro seems to be right up your alley. It's a terminal editor similar to vi or nano but with much more sensible keybinds. e.g. Ctrl+C is copy, Ctrl+V is paste, Ctrl+S is save, Ctrl+Q to quit, etc. It's got built in syntax-highlighting for many languages, as well as mouse support.

If you just want to open a file, edit it, and close it, it's one of the most painless ways to do so.

231
How do I enable syntax highlighting in nano?

19
True column-mode (block-selection and editing) text editor solution?
2
VIM text editor not found
4
A text editor or viewer with folding based on indentation
20
Minimal terminal editor alternative to vi and nano
2
graphical text editor that can filter text through shell commands?
2
All I want to do is edit a file, but
0
16.04: crontab -e editor settings / Python syntax highlighting in vim
6
Is there a good alternative hex editor instead of HxD editor?
0
Can we have a terminal that we can write like a text editor?