How to install software or upgrade from an old unsupported release?

Recently I have installed an older version of Ubuntu on my old machine. Whenever I try to install any software, I get an error saying it couldn't be found:

The repositories for older releases that are not supported (like 11.04, 11.10 and 13.04) get moved to an archive server. There are repositories available at http://old-releases.ubuntu.com.

The reason for this is that it is now out of support and no longer receiving updates and security patches.

I would urge you to consider a supported distribution. If your computer is too old in terms of memory or processor then you should consider a distribution such as Lubuntu or Xubuntu.

If you want to continue using an outdated release then edit /etc/apt/sources.list and change archive.ubuntu.com and security.ubuntu.com to old-releases.ubuntu.com.

You can do this with sed:

Sometimes, it might be faster to create backups of your system and reinstall using supported release instead.

Source: Can I keep using Ubuntu 9.04 if it's outdated?

To upgrade to a new release:

Once you have performed the above steps to switch to the old-releases mirrors, update the Update Manager and then do do-release-upgrade:

The 404 or Not Found error message is a HTTP standard response code indicating that the client was able to communicate with the server, but the server could not find what was requested.

The web site hosting server will typically generate "404 - Page Not Found" web page, when users attempts to follow a broken or dead link.

Why are we facing 404 errors

EOL: Once the support period for a particular release is over; they are called End Of Life (EOL) and all the updates and package repositories for that Release are transferred to a different server which results in 404 errors while running sudo apt-get update. You can confirm if your release has become EOL by going to this page. If your Ubuntu release is mentioned under "End Of Life (EOL)" Table, then the release is no longer supported and you should try to upgrade to a newer supported release. However, if you wish to continue using this unsupported release, you would have to make necessary modifications in /etc/apt/sources.list to point to the old-releases server of Ubuntu.

Well, actually we will do this without using any terminal. Not even once. Just GUI, I promise ;-)

First, open Software Sources (or Software & Updates in newer versions). It does not matter how old your Ubuntu is, there is certainly something like this. For Ubuntu 9.04 (Jaunty Jackalope), look at next image to see where it's located: 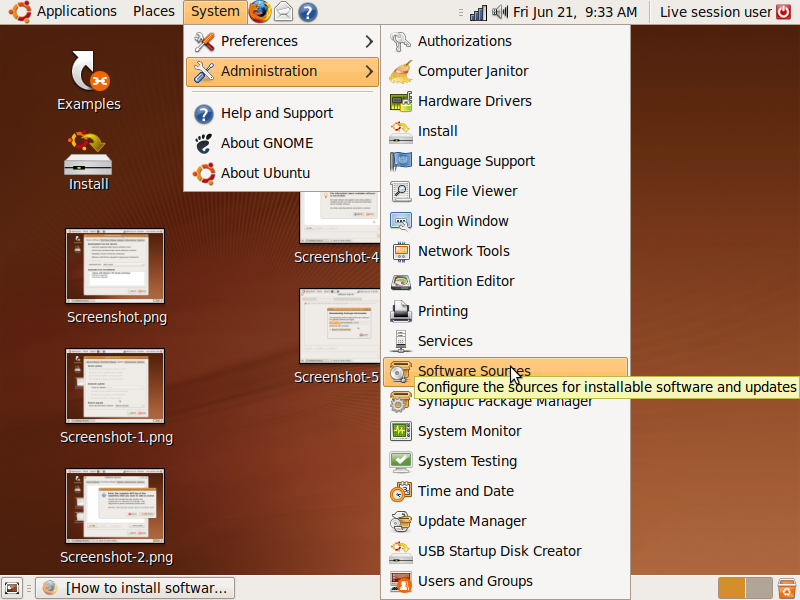 After Software Sources (or Software & Updates) is open, go in Ubuntu Software and Updates tabs and unselect everything like in next pictures. You don't need these things anymore since your Ubuntu version is End of Life: 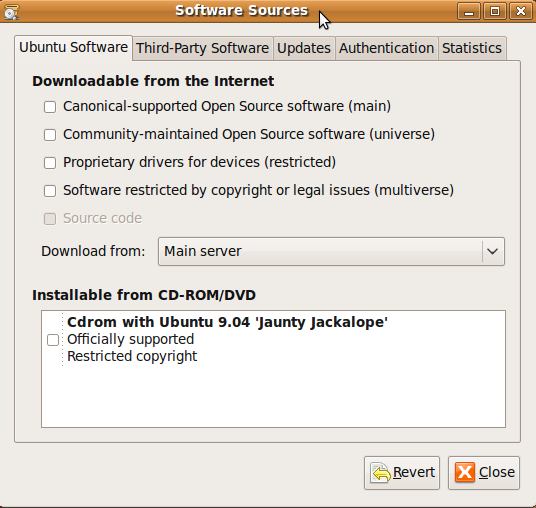 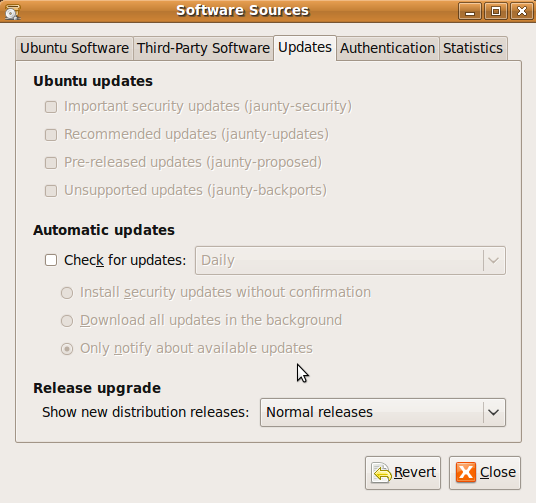 Without closing Software Sources (or Software & Updates), go in Third-Party Software (for newest releases, this tab is named Other Software) tab and add a new apt repository. Insert exactly next line when you are asked:

If your version of Ubuntu is not 9.04, replace in the above line jaunty with your Ubuntu codename (for example, if you have Ubuntu 9.10, replace it with karmic and so on): 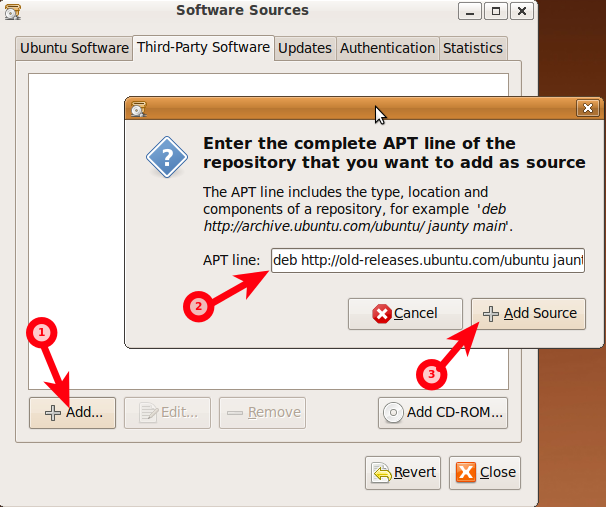 Now, when you will close Software Sources (or Software & Updates), you will be asked to reload the information about available software. Just be sure that you have a working internet connection: 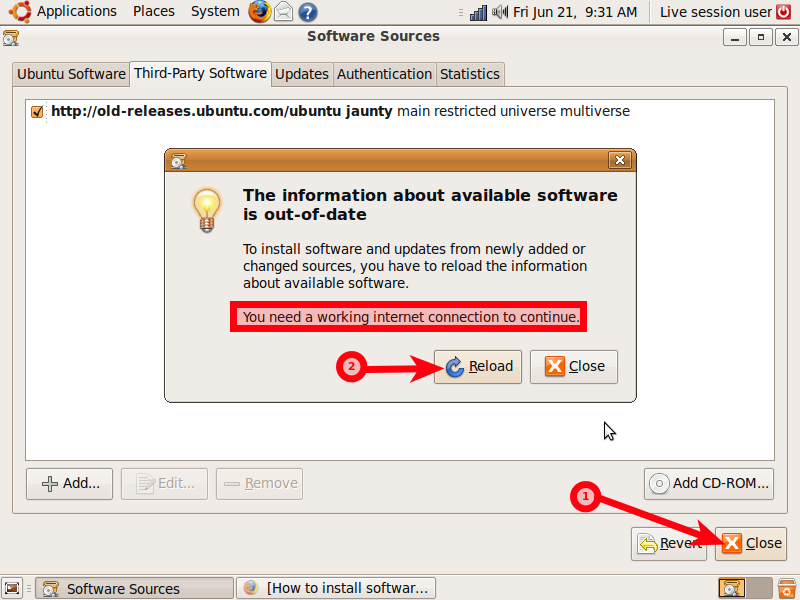 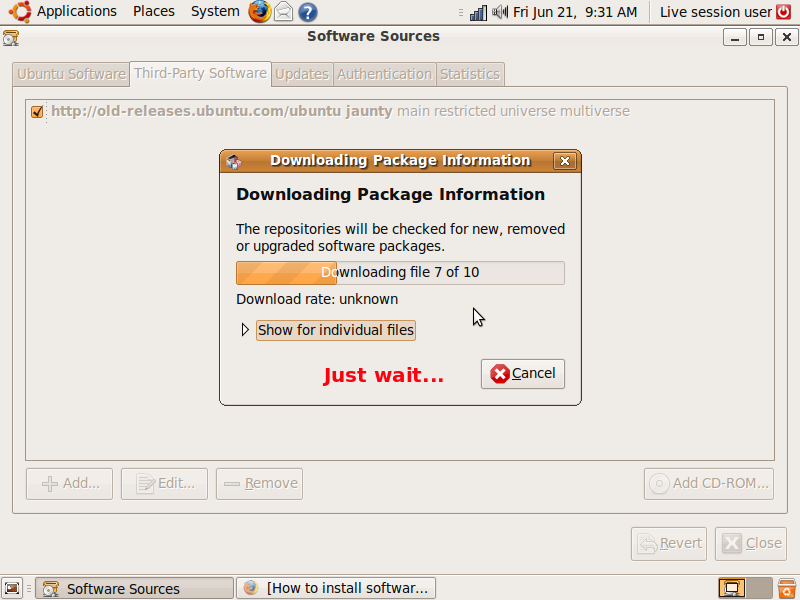 And now, you are free to download almost whatever you want. For 9.04, you can use Synaptic Package Manager. For newest releases, there is Ubuntu Software Center.

For example, to install VLC in Ubuntu 9.04 using Synaptic Package Manager, follow the instructions in the following pictures: 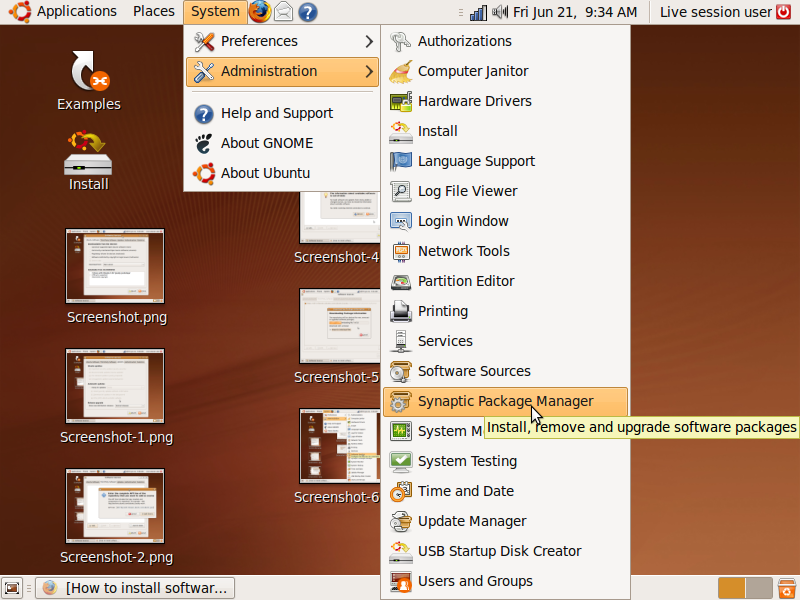 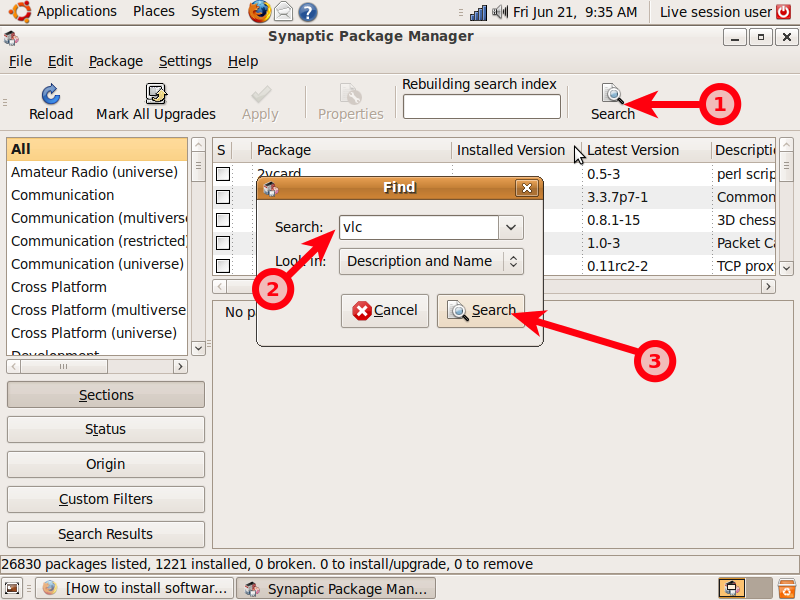 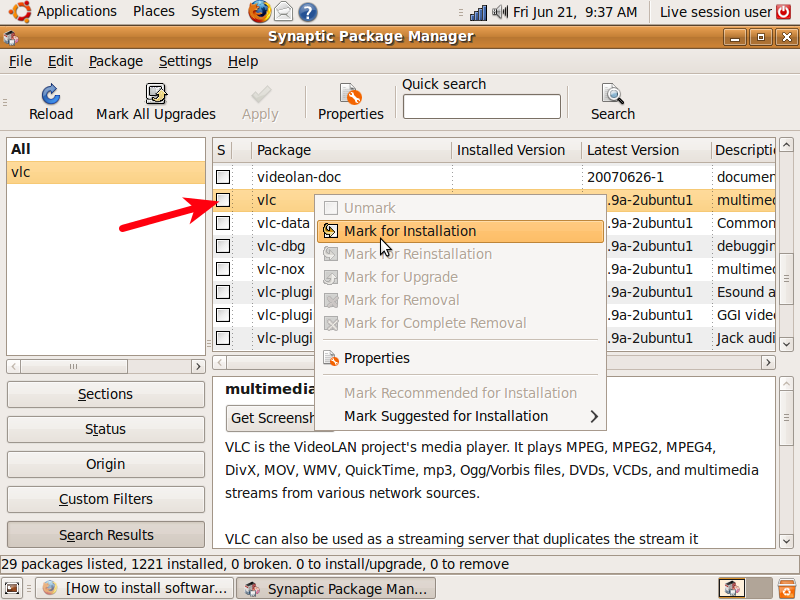 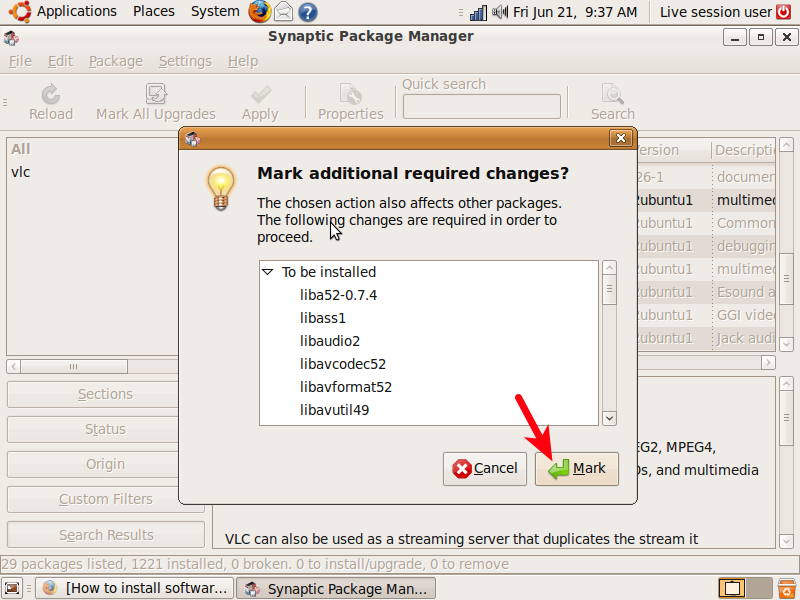 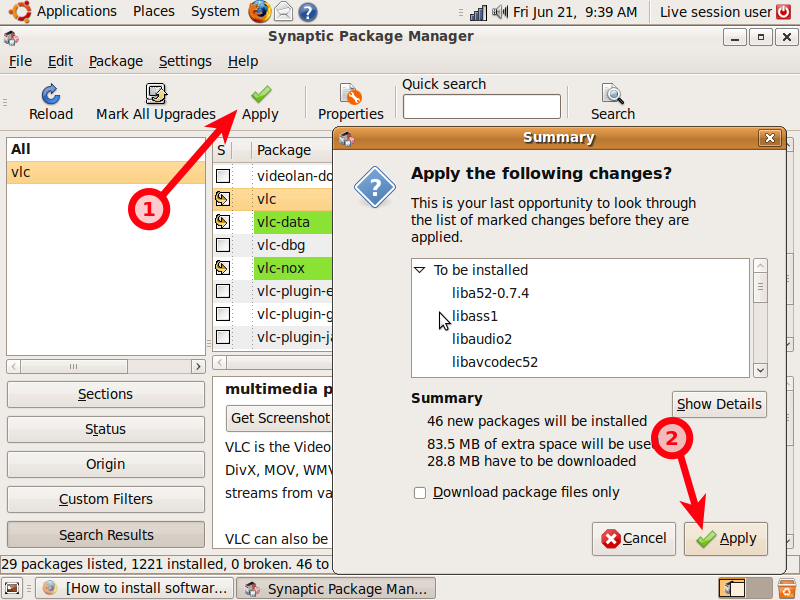 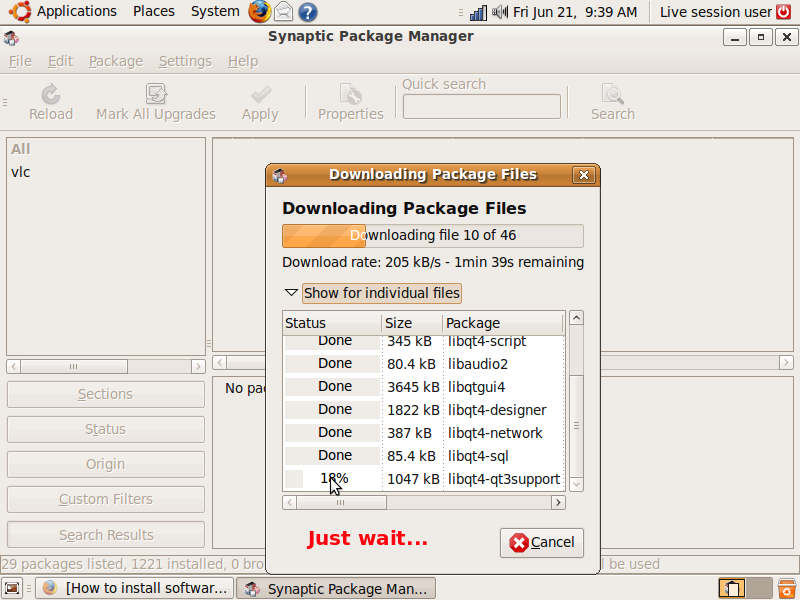 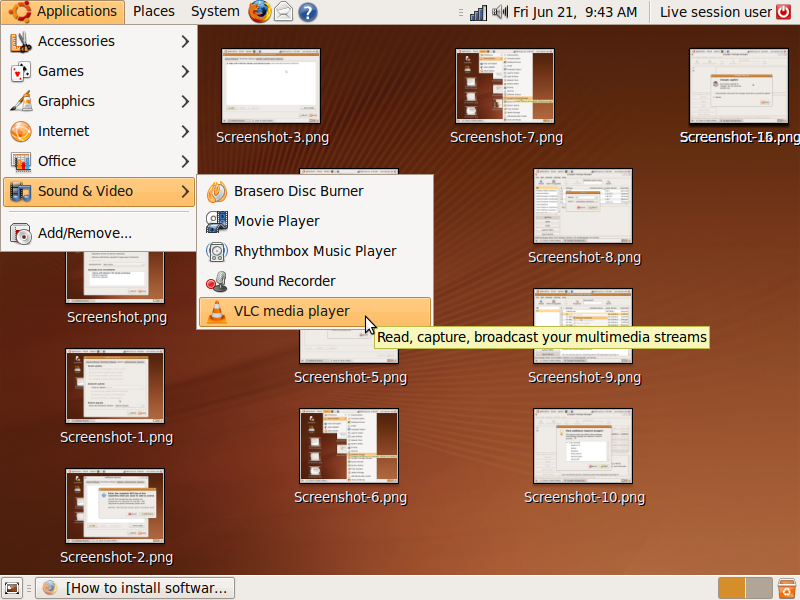 If you want to Update your Ubuntu to a new release, just go to System > Update Manager: 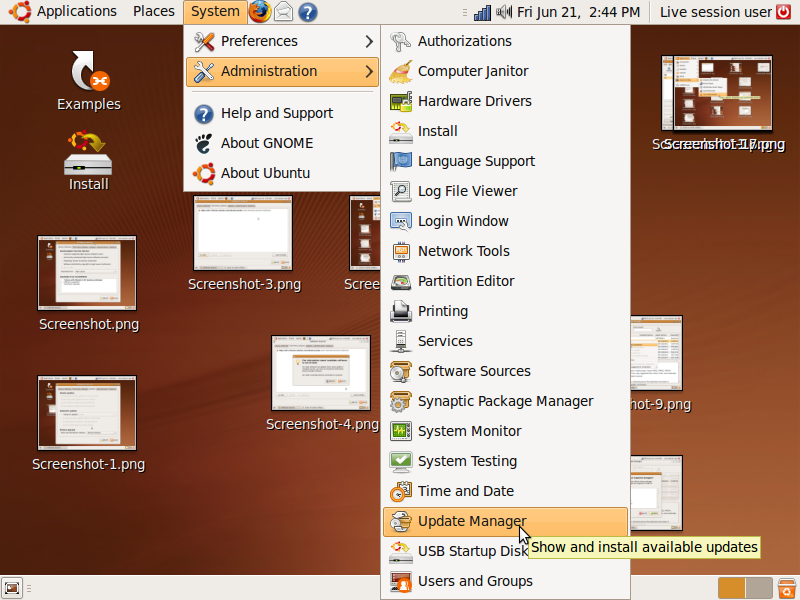 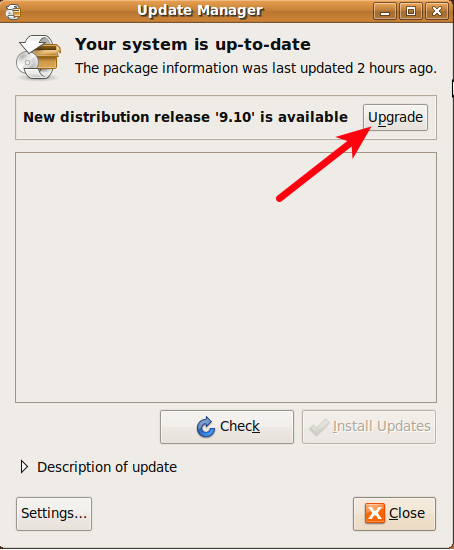 I tested this method from a live session of Ubuntu 9.04 (Jaunty Jackalope) and as you can see from these pictures it worked. If you are on an installed session of Ubuntu, you will be asked sometimes for root or admin password. Just insert your personal user password when you are asked.

I got here since I could not upgrade a system from 15.10 (EOL) to 16.04. But none of the answers worked for me, even after doing everything that was suggested here I kept getting from sudo do-release-upgrade the annoying response:

And I had no success in running update-manager; it kept throwing exceptions which I could not resolve. I suspect something is corrupted in my 15.10 installation, but the bottom line is that the built-in upgrades just fail.

So I looked for a non-built-in method, and sure enough I found it looking at What does `do-release-upgrade` really do?.

Here is the solution that worked for me:

To get apt-get working again, change your software sources to the old release repositories.

delete whatever is in there, and paste the following:

While fossfreedom's answer does a good job of describing and solving the problem, I've found a variant solution that I think is easier and a little more elegant.

The trick is to add http://old-releases.ubuntu.com/ubuntu/ as a mirror, and then tell Software Sources to switch to that mirror.

To do this, backup and edit /usr/share/python-apt/templates/Ubuntu.mirrors. Choose a fake location for the old-releases server (e.g. #LOC:US), and add the following line under it:

Now open the system's Software Sources dialog, and manually select old-releases.ubuntu.com as though it were your regional mirror. You should find it listed under the fake location you chose in the previous step.

If your Ubuntu (Kubuntu, Xubuntu, Mythbuntu, whatever-buntu) is really old, you will have to take three steps to upgrade to an up-to-date version:

Update the system to the newest available in http://old-releases.ubuntu.com

Set the package sources to old-releases.ubuntu.com and update

Here you can try a release upgrade if your current release is not too old (sudo do-release-upgrade). If it fails, you may find some clues in /var/log/dist-upgrade/main.log which could help to find a fix.

If your release is too old, go to next step.

Edit meta-release to set all the next releases as supported

You must set Supported: 1 for each release.

Example: I was on Ubuntu 17.04 (Zesty Zapus) and set all the releases supported starting from artful.

Reboot when asked to.

Redo it until your system is up to date.

When asked, answer that you want to keep your edited version of /etc/update-manager/meta-release excepted on the last upgrade.

When you are stuck to an old release

The process described above worked for me to upgrade to an unsupported release, and then to the last LTS release and I couldn't upgrade anymore.

Then I found the -p (--proposed) option of do-release-upgrade.

It tries to upgrade to the newest available release! And it worked: I skipped two releases and jumped directly from Ubuntu 18.04 (Bionic Beaver) to Ubuntu 19.10 (Eoan Ermine)!

It appears the Karmic repositories are no longer available.

Since they are for a previous version of Ubuntu, you might consider removing them from your sources list. Take a look at this help page for step-by-step.

You can find the repositories under the "old-releases" server http://old-releases.ubuntu.com/ubuntu/dists/

And about how to edit the /etc/apt/sources.list https://help.ubuntu.com/community/EOLUpgrades

There is an edge case - apt-get claims 16.04 LTS does not exist - where the old package (Vivid, in my case) was not in on the "old-releases" server. But apt-get could only find kernel and Google updates.

I am not sure exactly what my problem was because I had blindly followed the accepted answers sed command (never a smart move).

This did not work because Vivid was not in the "old-releases" archive but was still on the gb.archive.ubuntu.com mirror.

In that specific case, the solution was as follows:

Carefully go through all the sources and discover one of them was old and wrong and had failed to be properly updated (or something). Or, as I did, search replace from old-releases.ubuntu.com to gb.archive.ubuntu.com. It then upgraded, without a problem, to the next release while I caught up on some reading.

The takeaway here is that while the majority of answers here may apply in some cases it would pay to be sure that your /etc/apt/sources.list is correct before you nuke it for the "old-releases" archive.

You can figure out which of the archive or your mirror has the version you need by simply pointing a browser tab at the archive and question and looking for your version name in the folder list. Whichever one has your version, is the source you need to use.

If you have EOL release and if you do not afraid of reinstalling your system from scratch or just without formatting this older system, than you could try it. It tried only of curiocity and for testing purposes. Not real hardware, but VM have been used for this. DO NOT USE IT ON PROD. But strangely if you have EOL on prod.

During upgrade it failed to restart different services and even rejected to reboot or shutdown correctly. I've powered the VM off and started it again.

It started without issues.

Testing:
Applications are opened correctly.
/etc/apt/sources.list have been generated with duplicates of eoan repositories, so I've removed excessive records and now it is:

It looks like a usual stable 19.10 Ubuntu system upgraded correctly as my host is.

In my case I was stuck in 19.04 for months because I didn't upgrades at time and I wasn't able to do the upgrade to 19.10 after that time. But the other day, Ubuntu automatically gives me the option to do a Partial Upgrade to 19.10 (maybe because I did a lot of stuff weeks ago, but sorry, I can't be sure the reason). So I did it and the result of lsb_release -a was Ubuntu 19.10. So I think I could be able to do another upgrade to 20.04.1, but isn't possible because 19.10 reached EOL.

I hope this will serve for someone, someday.

Merry Christmas to all.

81
Upgrading from the command line?
19
Can I keep using Ubuntu 9.04 if it's outdated?
7
How to upgrade from Ubuntu 10.10 to 11.04?
13
Updating ubuntu server apt-get gives me - 404 Not Found
35
Upgrade to 22.04 (impish Release no longer has a Release file)
11
Installing ubuntu 16.04 without losing data
9
What to do when can't update anymore with apt-get?
9
Where can I find a repository for older unsupported releases?
7
How do I download old unsupported packages such as Kernel headers?
11
Are existing updates available after end of support?
See more linked questions

0
How to install gcj on Ubuntu 16.04
0
Node js trouble intallation after removing nodejs, to update to latest stable version