I am no longer able to write on the data partition files in Ubuntu, due to a "read-only" message appearing.

I have 3 partitions: one has Ubuntu installed (1), one is for Win10 (2) (dual boot) and the 3rd (3) is for data storage.
Today I updated Win10 and I am no longer able to access the data storage (3) partition from Ubuntu. Usually this error appears when I access Ubuntu while Win10 is not shut down but hibernated. Instead this time the error appears even if Win10 is shut down!
I don't get what's going on. Any clue? 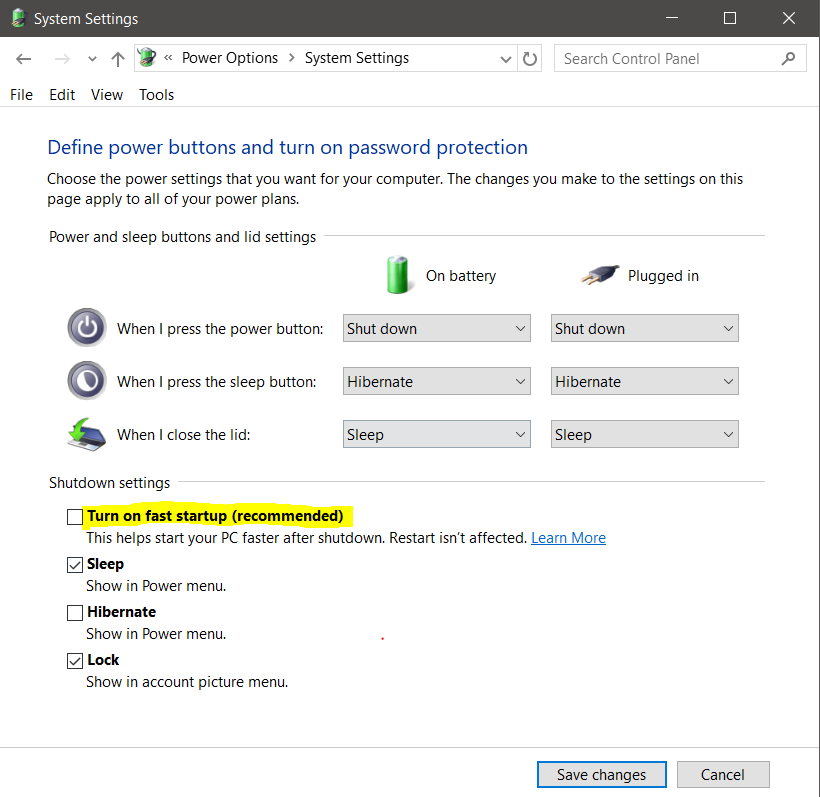 Open the terminal and write the command

It will show your file system

identify the partition you want permission for read and write

You may encounter this filesystem error while in dual boot.

Sometimes the feature "Disable Fastboot" is prohibited to change by non-admin user by group policy restriction.

The below solution will help for all situations.

Login to windows, close all opened windows if any and execute following, from Run dialog

Windows is hibernated, refused to mount

Chances are that Windows really is hibernated. Windows does this automatically when you tell it to shutdown normally. The benefit is that you get a faster apparent start-up time.

To shutdown Windows without hybernating, issue the following at a command-prompt (in Windows):

You might also want include /t 0 for immediate shutdown.

I found a nice tutorial to set up a launcher for this: How to Do a Full Shutdown in Windows 8 Without Disabling Hybrid Boot.

The simpler approach to actually shutting down Windows is to 'restart' (rather than 'shutdown'), but then intercept the boot process and boot Linux instead of letting it boot Windows.

for me it was solution to restart from Linux go to windows, restart from windows and go bask to Linux. I guess windows did not close some permissions.

Not the answer you're looking for? Browse other questions tagged dual-boot partitioning read-only or ask your own question.

30
How to fix "The destination is read-only" error on HDD partition
2
(SOLVED) Dual-boot: (Windows 10, Ubuntu 18.04) Can't see files from other OS in shared NTFS partition
0
Destination is Read only error on ubuntu file system
0
Read only Drive, Dual boot Windows 10. Kubuntu on 2nd internal HDD
0
How can I make My external hard drive writable in ubuntu 18.04?

64
Why does my NTFS partition mount as read only?
3
My microSD mounted read-only
0
A dedicated NTFS data partition in dual-boot - a better way to communicate data?
0
Dual boot partition issue
2
HDD partition is read-only despite 'rw' flag in fstab
3
Virtualize Win10 partition from Ubuntu