How can I tell if I am running Wayland?

Wayland is the default display server for Ubuntu 17.10 "on supported systems". But how can I tell if my platform is supported and I'm actually using Wayland?

Open the terminal and type in:

Check if it prints wayland.

You could install mesa-utils-extra and run es2gears_wayland If the app runs, you are running Wayland.

For a fun way to check whether a specific app is using Wayland or XWayland, run xeyes. The eyes will move if the cursor is over an X or XWayland window.

Or run this in a terminal:

If there is no output, you are not running Wayland.

Use that command in the Ubuntu terminal:

Look at the value returned. If on wayland it will return

On Ubuntu 21.04, you can also see it from the Settings GUI (Win key, type Settings, select. Executable name: gnome-control-center), which is nice.

The default is Wayland on that system, 21.04 appears to be the first release where it was the default: https://www.omgubuntu.co.uk/2021/01/ubuntu-21-04-will-use-wayland-by-default 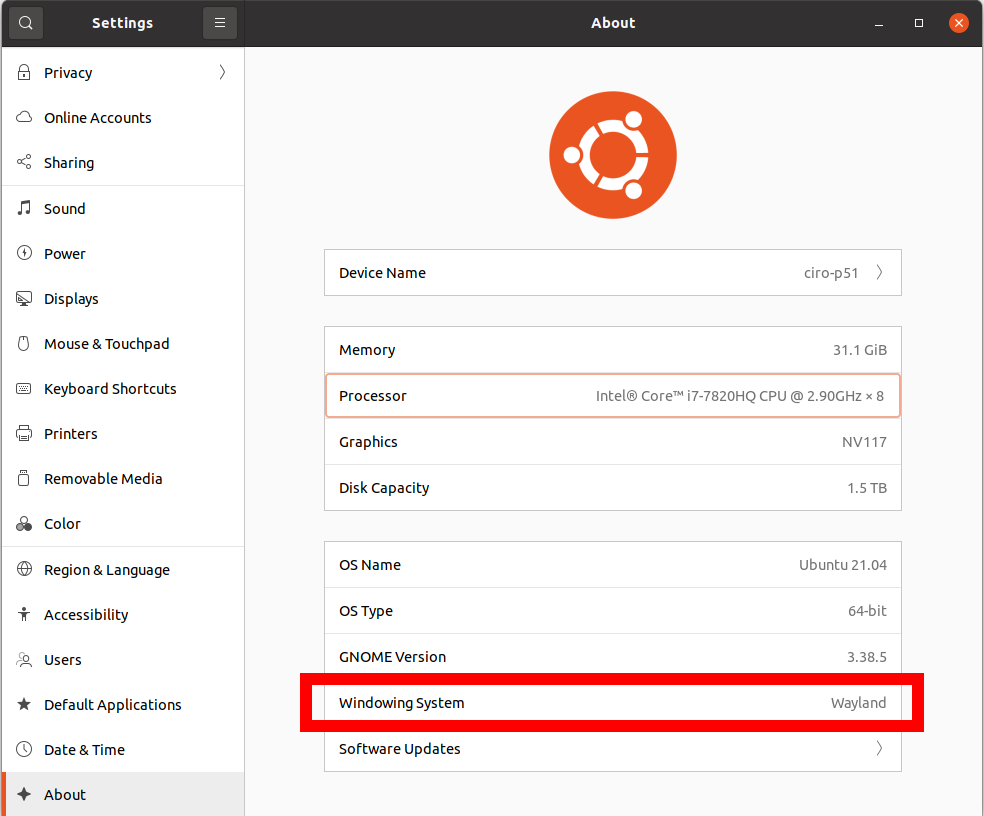 If I change to X11 as mentioned at: How do you switch from Wayland back to Xorg in Ubuntu 17.10? it says:

As mentioned at: Ubuntu 21.04: how to enable Wayland? however, if Ubuntu detects that you don't have the hardware support, it fallbacks to X11 by default.

Also, the NVIDIA 460 driver doesn't support Wayland, and X11 becomes your only choice once you install it.

BTW, the 21.04 minimal ISO install (which has Wayland and no NVIDIA driver, which is proprietary and needs to be installed manually later) has a known bug that crashed my UI every other day: Ubuntu UI screen image freezes randomly during usage after fresh 21.04 install, suspecting Wayland or Nouveau making it unusable. The problem stopped when I installed the nvidia driver and used X11.

I don't know if this answer generalizes, but I found that running xrandr will show different monitor names if running wayland vs. not:

If you execute echo $WAYLAND_DISPLAY, a text (like wayland-0) will be printed only under Wayland.

78
How do you switch from Wayland back to Xorg in Ubuntu 17.10?
7
How can I remove the title bar on Ubuntu 19.04?
4
Ubuntu 21.04: how to enable Wayland?
4
Users UI: Clicking Unlock does nothing
2
No Gear to choose Xorg Session
2
Experimental fractional scaling not showing up gnome settings app on 17.10
1
Touchpad sensitivty too high: 18.04.1 on Dell Latitude E7240
1
How to close an unexpected window on desktop ubuntu
0
java.lang.NoClassDefFoundError: Could not initialize class java.awt.Container
1
Ubuntu UI screen image freezes randomly during usage after fresh 21.04 install, suspecting Wayland or Nouveau
See more linked questions

12
Will Wayland have network transparency?
9
Is Wayland coming to Ubuntu Oneric?
12
How to get a Wayland session in Kubuntu?
6
How to find the version of Wayland?
13
how does X11 forwarding with Ubuntu 17.10/Wayland?
3
Why do I have Wayland packages installed although my system is not using Wayland?
16
How can I tell if an application is using XWayland?