Not able to see items on Desktop

I'm using 16.04 and I can't see my items on my desktop. Doing gsettings set org.gnome.desktop.background show-desktop-icons true in the terminal does nothing and in Dconf show desktop icons is enabled. I know my folder is still on my desktop because cd /home/desktop shows it there. Any ideas?

One possibility is a little known glitch in 16.04 that produces an effect similar to the issue you describe. This glitch is activated by moving files from a directory that has a hard linked icon on the desktop.

The most common "fix" for this glitch is to simply:

(2) press and hold the Super key until your launcher displays numbers atop its icons;

If this particular glitch is responsible, your desktop icons should immediately become visible. NOTE: This is not a permanent resolution but will work the same way every time it is used.

Install gnome-tweak-tool by typing this in a terminal:

Then you can run gnome-tweak-tool, go to Desktop, and then turn on the switch in the upper right hand corner. 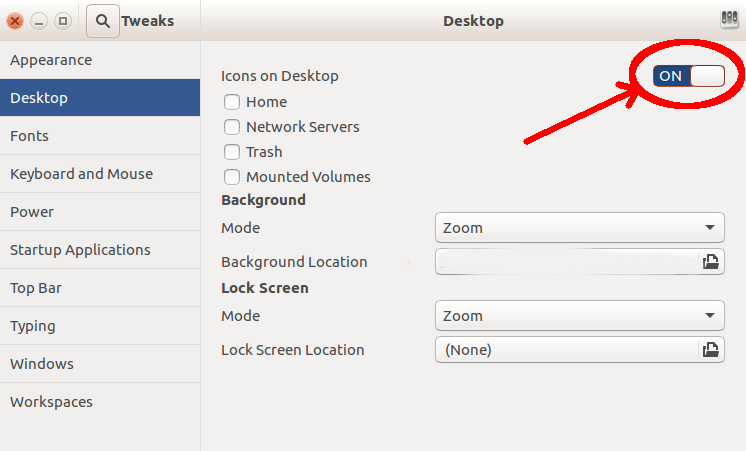 I have this problem when using the Wallpaper feature CompizConfig Setting Manager to control my wallpaper. Turning on the icons in gnome-tweak-tool restores my desktop icons.

Not the answer you're looking for? Browse other questions tagged 16.04 dconf or ask your own question.