I'm sure this is simple for someone but I have tried for the last 2 days every piece of information from googling and still no joy! So I would really appreciate some help. I'm newish to the world of Linux but enjoying the change.

I recently built a Ubuntu headless 16.04.2 LTS server to run Plex with the media living on my Qnap NAS. Following this guide I got things going pretty easily. So created the mounts like this:

Added the following lines to the /etc/fstab file

then ran the mount cmd

the shares mount fine, Plex could read the media and build a library.

Then I wanted to enable Camera Upload from my phone and that is when the fun began. Straight up it wouldn't work so I thought simple- change the permissions for the folder on the NAS to rw and bingo should work- Nope.
I can make and remove a folder from CLI but Plex still no rw access. Plex created a user called Plex so I tried to change the owner and permissions to plex using sudo chown -R plex /mnt/Multimedia but I get "changing ownership of '/mnt/Multimedia/files' : Permission denied. Tried sudo chmod 755 -R /mnt/Multimedia and I get the same response..

When I run a 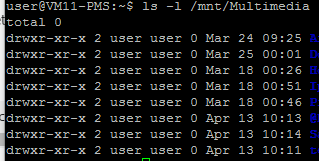 I have since tried different mount options with no luck. Tried creating a group and making plex part of that group and apply the group and no luck.

Why is it so hard to change permissions on a network share?

Have a look at this answer: https://unix.stackexchange.com/questions/68079/mount-cifs-network-drive-write-permissions-and-chown

So the solution is to specify user and group ID when mounting.

Not the answer you're looking for? Browse other questions tagged mount permissions samba fstab or ask your own question.

6
How do I map users with a samba share?