How to copy (or move) files from remote machine to local machine?

How can this otherwise be done?

nullmeta's answer is completely valid, and perhaps nullmeta will edit to provide the clarification you're looking for. I'm posting a separate solution altogether to account for the situation where it may be difficult because of network structure (think NAT firewall) to simply ssh back into the local system.

Say you have two computers, ComputerA and ComputerB. ComputerA is your local workstation. ComputerB is a remote machine that you can access via ssh.

Scenario 1: If ComputerA is not behind an NAT firewall

This is a swift and easy solution, combining scp and ssh (scp performs a secure copy using ssh protocols). It requires you to have an ssh server (and client) installed on both ends (computerA and computerB).

To use this solution, run from ComputerB:

Scenario 2: If ComputerA is behind an NAT firewall

In this scenario, you would typically need to configure port-forwarding in the NAT firewall. However, you may not always have access to make these kinds of changes. In this case, you can configure your ssh tunnel from ComputerA -> ComputerB such it can tunnel reverse connections as well.

When establishing the ssh connection ComputerA -> ComputerB, do so with the -R option in the following manner. ssh ComputerBUser@ComputerB -R 2222:localhost:22 where ComputerBUser is the username for the account on ComputerB being authenticated and 2222 is a free port on ComputerB. We'll use this port to reverse-tunnel back to ComputerA from ComputerB.

Now from ComputerB, you can issue the scp command in the following manner to copy files from ComputerB -> ComputerA where ComputerAUser is your username on ComputerA:

What's happening here? It looks like we are simply telling ComputerB to send the file back to itself because we're passing localhost instead of ComputerA. We are indeed telling scp to pass the file back to ComputerB, but to port 2222. All connections to port 2222 on ComputerB get forwarded to port 22 (default ssh port) on ComputerA. Thus, by tunneling backwards over the existing ssh connection, it doesn't matter that ComputerA is behind an NAT firewall.

If you need an easy way to browse the file system of a remote machine and copy certain files to the local machine (and vice versa) you can use SSHFS.

Unlike this guide I haven't done anything other on my Ubuntu 16.04. There is no fuse user group.

Usage according to the question

Without being in a SSH session you would want to use

If your local machine has sshd running and the port open, while in the ssh session you can

This link has some workarounds https://unix.stackexchange.com/questions/2857/ssh-easily-copy-file-to-local-system

Edit: I apologize for any confusion, the easiest and most efficient way is going to be opening a second terminal and running the first scp command I mentioned.

To move files from computer to computer over a network, you use the scp utility (scp stands for secure copy). ssh is only used for remote login access.

Since you have already successfully logged in to another computer on your network, you can simply copy your files to your local machine from there, but you're going to need to get an ssh deamon running on your local machine. So, install it first:

Make sure that it's up and running (the green light thing shows that it is): 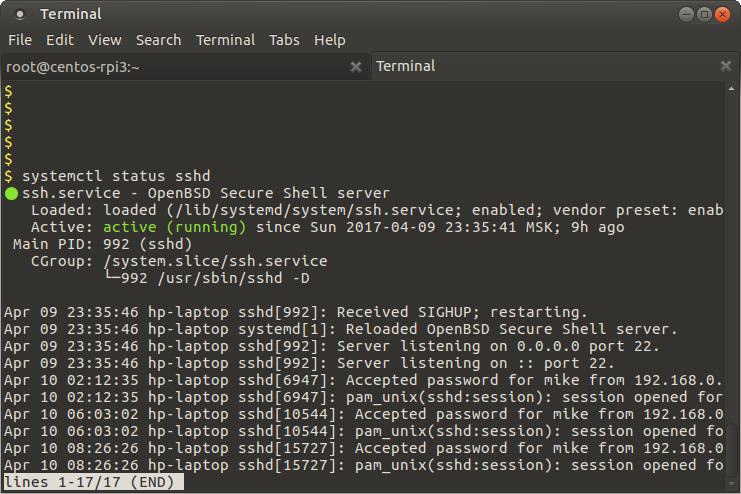 Put all the files on the remote machine that you want to copy over to your local computer in a separate directory. Then, use this command:

-r means that the directory along with all its contents is going to be processed recursively. In simple terms, this means that it's the option you're going to use every time you want to copy a directory containing files. [DIRECTORY] is the path to that directory. [USER] is the user on your local machine. [IP_ADDRESS] is the IP address of that machine. The stuff after the : is where you want your files to be saved on your local machine. In this case, it's the Downloads folder.

This is what this process looks like in reality: 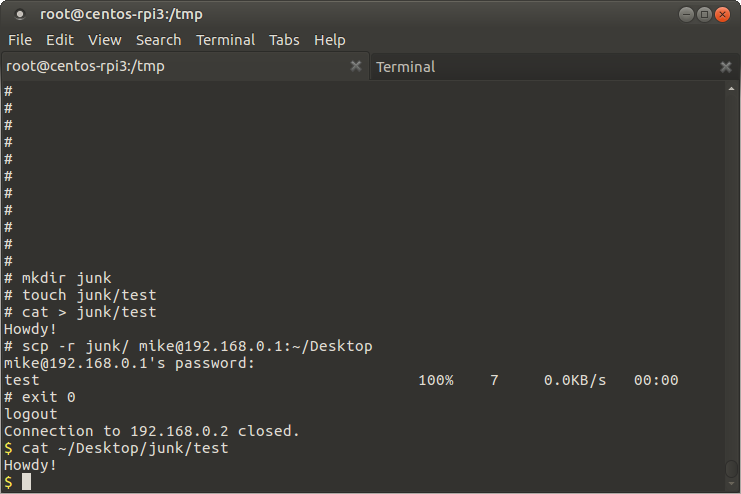 1
Use Outgoing SSH to receive incoming SSH
0
Cron has not been running since a specific date
1
Cronjob once a day in Ubuntu 12.04
2
How to transfer a file from my Ubuntu Server in VirtualBox to my local Ubuntu machine?
0
How to pass addional script to an already existing ssh script
1
qBitTorrent save to sftp location