Can I safely un-install and purge the linux-signed* packages from my Ubuntu 16.10 (yakkety) installation?

The reason I am considering this is that my UEFI bios does not use secure boot, and my boot partition is only 200 MiB (~210 MB). I have encryption on the rest of the partitions, and I really don't want to resize them to expand the boot partition.

Unfortunately, 200 MiB is just barely too small to hold 3 kernels. The current kernels come to about 61 MiB each (that's including the abi, config, initrd, map, plus signed and unsigned kernel binaries). Adding in grub, memtest, and the partition table pushes it to about 198, which is apparently not enough free space for apt to update the kernel. I normally keep only 2 kernels (current + last), but obviously I need space for a third during the update process. If I didn't have the signed kernels (7.2 MiB each), I would be OK.

Will the following break my system?

I believe that it should remove the following kernel packages and prevent new signed kernels from being installed:

I have all of the regular (unsigned) versions of these packages installed.

As a side question, does anyone know why the unicode.pf2 file (2.3 MiB) appears in both /boot/grub and /boot/grub/fonts? I diffed the files and they are exactly the same. I assume this is the font used on the grub menu, but why does it appear twice on the same partition? I feel silly wrangling about 2.3 MiB, but that could also make a huge difference in my particular case.

The .efi.signed kernels appear in every menu entry in /boot/grub/grub.cfg. I know that my uefi firmware (I guess bios isn't the right term anymore) does not use secure boot, but the grub config files seem to think that it does. Obviously my system boots the signed kernels just fine, so maybe I can purge the unsigned kernels instead?

I dug into /etc/grub.d/10_linux to find where these lines come from, and found the following code:

I'm no bash expert, but I think I follow this in pseudo code

so, if I purge the signed kernel packages, then re-run grub-mkconfig, it should put the regular unsigned kernels into grub.cfg, right?

Thanks for all the help and links. I spent a few hours this weekend and verified the following

In the first case, the solution is really simple. It works pretty much as you would assume at first glance. Still I learned some helpful things about the ubuntu package structure for kernels. I wanted to be sure that I understood the side effects or consequences, but I also just like to see how things are built. Just as a side note, I use the generic kernel, but just swap generic for lowlatency or virtual if that is your thing. Also, everything here is based on 16.10 (yakkety). Here is the kernel package hierarchy: 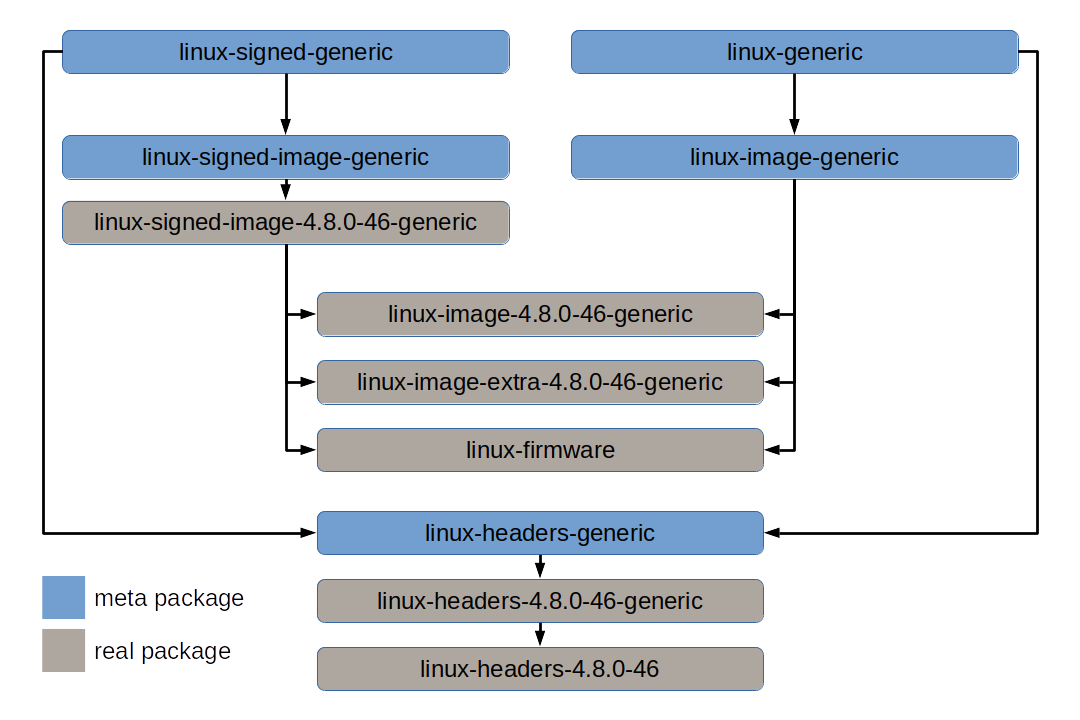 In the second case (trying to keep the signed kernel image only), there seem to be no consequences to deleting /boot/vmlinuz-x.x.x.yy-generic after the installation is complete. The two kernel images are exactly the same except for the signature, and they share all the same modules and config files. However, as soon as an updated kernel is installed, it will leave behind the unsigned image. Fortunately, there were easy hooks for running a script every time a new kernel is installed. Any scripts in /etc/kernel/postinst.d are executed by run-parts with two arguments $1 is the kernel version and $2 is the full path of the image (i.e. /boot/vmlinuz-x.x.x-yy-generic)

The only minor caveat is that removing the unsigned image has to be done after grub is finished updating grub.cfg. If /boot/vmlinuz-x.x.x-yy-generic.efi.signed exists, grub adds that image to grub.cfg and ignores the unsigned image. However, there must be somewhere in the process that still expects the unsigned image because grub fails to configure properly without it. The script that initiates grub configuration is /etc/kernel/postinst.d/zz-update-grub. I named my script zzz-remove-unsigned-kernel so that run-parts executes it after everything else is finished.

EDIT: I've used this script now with a few kernel build updates, and everything seems to work fine. I am using option 2 above (deleting unsigned kernels). I'm going to mark this as the correct answer.

Finally, if you're desperate enough to free a few megabytes that you're looking at duplicated files in the /boot/grub directory tree, you might consider moving away from GRUB altogether. Most other boot loaders don't require as much in the way of files in /boot as GRUB does. If you're booting in EFI mode, my own rEFInd boot manager is likely to be the easiest to install, and you can try it on a USB drive or CD-R to see what it's like before mucking with your hard disk. If you're booting in BIOS mode, LILO, SYSLINUX, and even GRUB Legacy are all options, but I don't have pointers to instructions on how to install any of them, offhand.

The ..signed kernels are a bit bigger, so if you are not running with secure boot enabled and are trying to save space, use the unsigned and purge the signed. I too think your approach with rebuilding grub will work. If you should lose power before the grub.cfg rebuild, you can always edit the old grub menu and delete the signed part. Of course, you can leave one signed version (the latest) and get rid of the others to see if things work as expected, then do it again for the last one, never leaving you without a known bootable setup. As for the unicode.pf2 files -- they exist on my system too. You could try replacing one with a link to the other (with boot media handy in case you need to put the file back where the link is).

Not the answer you're looking for? Browse other questions tagged kernel uefi secure-boot or ask your own question.

2
Updates fail due to "/etc/default/grub: splash”: not found" error
1
Where can I download Linux-signed-image kernels?
1
Linux Headers not upgrading. It says "no space" when I have lots
1
Errors every time I use 'apt install' because of old kernels
1
Use unsigned kernel
0
Can't boot with secure boot and with the kernel signed