How to fix Bang and Olufsen Audio for HP laptops?

I'm trying to install bang and olufsen drivers, or HP hd audio driver, as only 2 of the 4 speakers work and the 2 amps don't work in ubuntu

The volume is terrible. Is there any way to fix this?

The speakers work perfectly on the pre-installed Windows 8.

Two years later it is possible!

There is a new answer with a comment confirming it works. The link is included so people are apprised of updates to this issue.

This is no longer true but left her for posterity purposes.

The so-called "HP Expert" there said it's like trying to put a jet engine in a car and make it fly like an AirBus A380. So not very promising. He did reference another question here in Ask Ubuntu:

...however that has no answers either.

Do a little more digging

I did a little more digging and found this bug report:

There are 91 comments posted from November 29, 2016 up to yesterday (August 12, 2017). There are various band-aid approaches people have tried. I suggest you subscribe to the bug report and keep abreast of bug fixes / work arounds.

The most successful band-aid to date requires installing a windows update and rebooting into Linux. This "tricks" the amplifier to being powered on. After rebooting into Linux poking in some register configuration values is required. You can read all about it in the 91 comments but I just wanted to summarize it for you.

Hopefully someone will reverse-engineer the Windows driver for Bang & Olufsen and create one for Linux. It doesn't appear HP is willing to do it.

I purchased a late 2017 Spectre X360, model 13-ae013dx. I was able to solve this bug consistently using HDAJackRetask under Antergos by performing the following:

Hit Apply Now, and voila you have sound out of all four speakers. 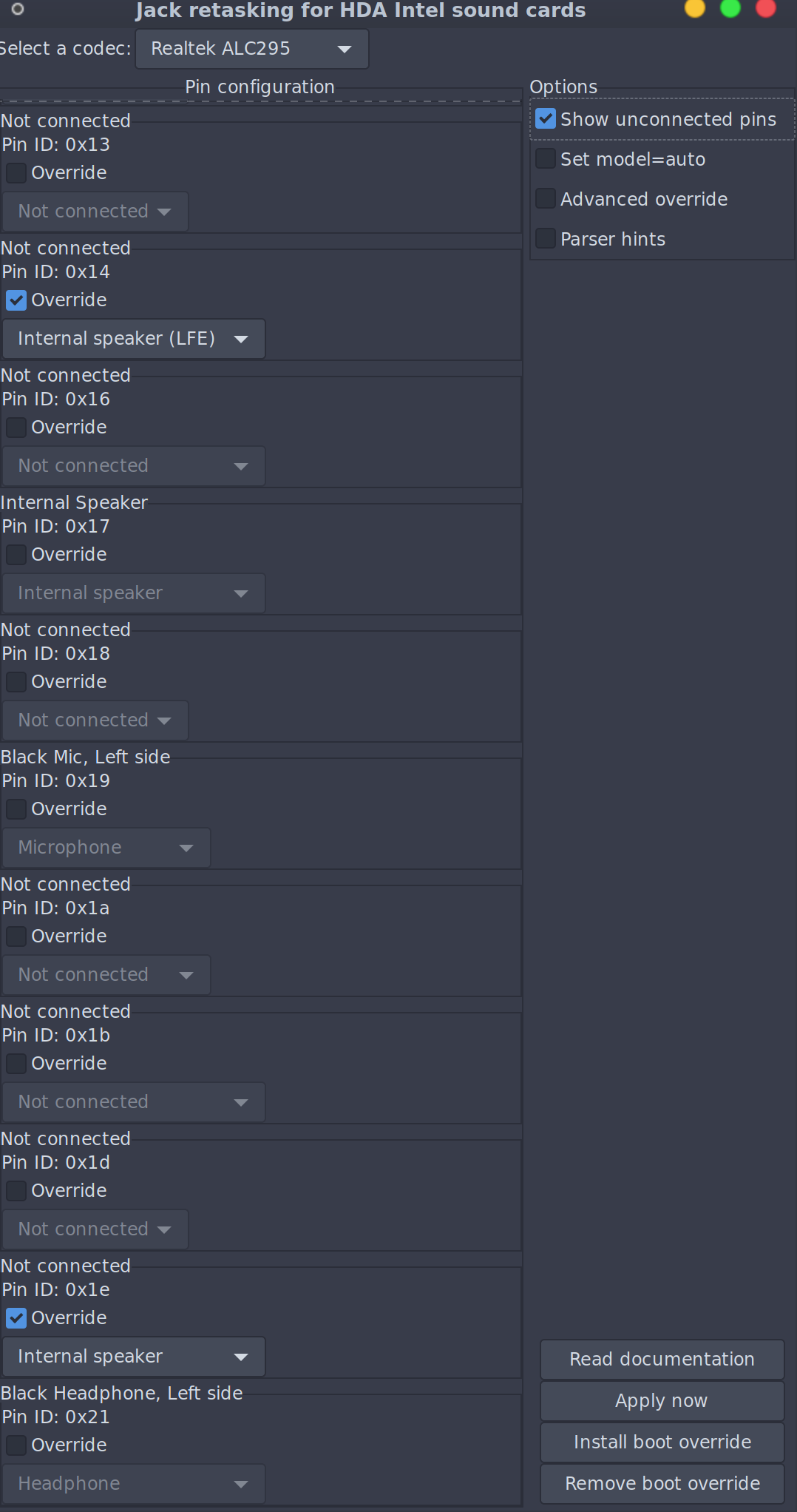 I'm currently running Kernel 4.20.10-arch1-1-ARCH, and I have tried absolutely everything on this thread to no avail. Hope this helps!

and Mayank Sharma has written a detailed answer on How to install Bang and Olufsen Audio drivers for HP laptop?

UPDATE: Before trying my solution below, see a (probably better) answer here.

I'm running Ubuntu 20.04.4 on a HP ENVY 16-inch laptop that I purchased in August 2022. @Juan P.'s answer worked for me. However, I had to use the exact same settings they had in their screenshot, and not only the ones they mentioned in the text of their answer. I've typed out these settings here in case the screenshot in their answer is no longer available.

To summarize, the steps for fixing the Bang & Olufsen speakers is as follows: