Spacevim does not have colors in Terminator 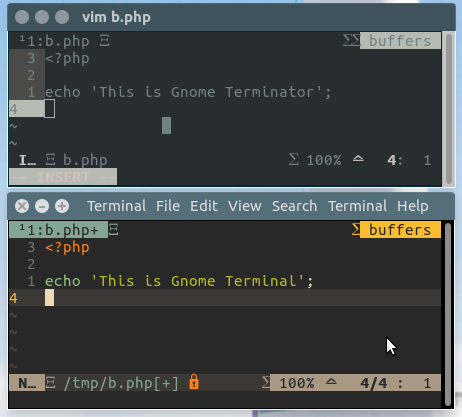 One at the top is Terminator, and Gnome Terminal on the bottom.

They're both using ZSH with ohmyzsh addons. I've added export TERM="xterm-256color" to my .zshrc and it does report the same amount of colors as the other terminal apps:

I've tried using the system color schemes as well using custom, changing the colorscheme in Spacevim - but nothing happened. Any help would be appreciated. Thanks!

I am author of SpaceVim, by default SpaceVim use true colors, you can add let g:spacevim_enable_guicolors = 0 to ~/.SpaceVim.d/init.vim. If it still does not work, please open issue in

or send email to me.

Not the answer you're looking for? Browse other questions tagged 16.10 vim terminator or ask your own question.