How to make the file manager show file sizes in GiB, MiB, KiB?

You can't do so, mainly because Ubuntu follows the Units Policy.

If user expect to see file sizes in base-2 using the default file manager in Ubuntu, forget about it. Most known file managers have been using base-10 for some time already.

While the policy applies to default file manager in Ubuntu for 10.10 and newer releases, there are file managers that did not follow the same.

Notice that file managers that show file sizes in base-2 are often found as platform independent software. This may be influenced by the fact that operating system for consumers, esp. Microsoft Windows, use customary binary prefixes a.k.a. JEDEC units.

As for Dolphin file manager, it is the KDE development platform that allows its application programs to show file sizes in base-2, rather than the file manager itself. Such option has been available in KDE Plasma 4, but went missing in KDE Plasma 5. 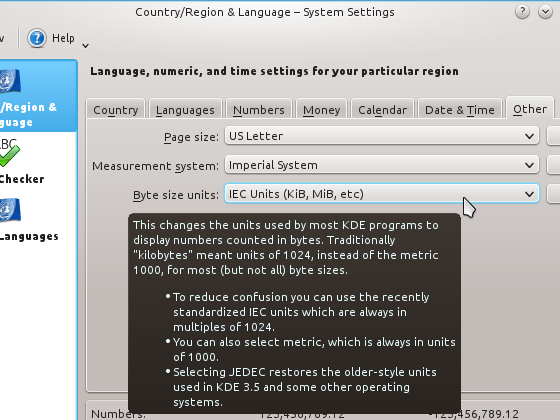 We can trace back the history, when the blueprint was registered in late-2008 by Joel Parker. Two years later, the policy was finally implemented in Ubuntu 10.10. For such carefully planned changes, it is very less likely for file manager in Ubuntu to revert the changes. Time will tell.

TL;DR Use a file manager that show file sizes in base-2 (KiB, MiB, GiB) for consistent experience across different operating systems. Very less likely for base-2 to be reintroduced in Ubuntu anyway.

Not the answer you're looking for? Browse other questions tagged unity nautilus or ask your own question.

7
Why do du -sh and the file manager disagree?

4
How to make some folders appear on the top in Nautilus?
8
How do I show the Applications Lens By Default?
0
How do I turn off thumbnails in the file manager?
0
Does anyone know how to make nautilus as a file manager in Xubuntu 12.04?
27
Display folder sizes in file manager
5
Make second monitor show workspace that's on the left of primary monitor
7
How to make Ubuntu File Manager show the "real" path after opening a shortcut link?
2
File manager to show video bit rate