How to sync tasks between Ubuntu and Android?

I was using first Tasque and then GTG on Ubuntu and Astrid on Android with Remember The Milk as the backend. Recently, Astrid has dropped support for Remember The Milk, and both Tasque and GTG's support for syncing with RTM has always left something to be desired. So I'm looking for a new solution, and I'm open to leaving RTM especially if it is for something that isn't proprietary.

What have you found to keep your tasks lists in-sync between Ubuntu and Android?

In particular, I'm looking for a desktop based program on the Ubuntu side rather than something in the browser. Astrid has treated me well, but I wouldn't mind trying something else. Currently, it can sync with Astrid.com, Google Tasks, and Producteev. Anyone know of a desktop app that supports any of those?

deckoff hinted at this in his answer, and I've been trying it out myself for a bit now. So I should probably add it here. There is a GTasks indicator available in a third party PPA, google-tasks-indicator. 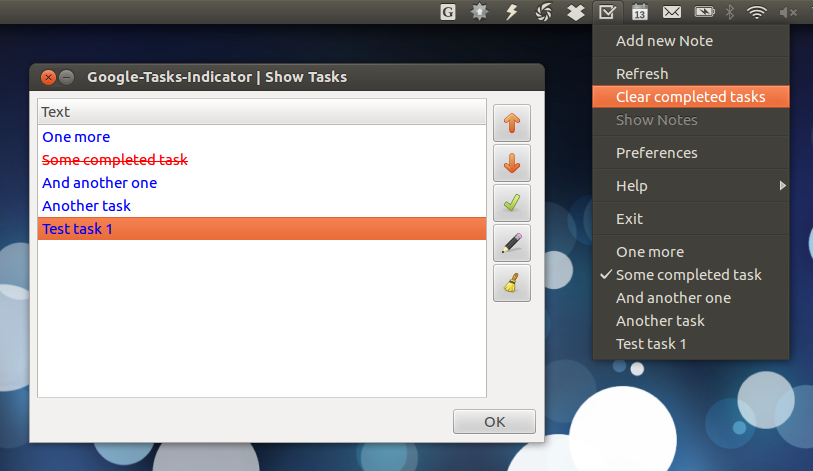 You can add the PPA and install the app with:

It does most every thing that you expect, but you can't indent tasks and getting to notes is a bit inconvenient.

More and more, I'm thinking that GTasks just isn't feature-full enough for me...

I will simply go with Gtask chrome app for desktop and Gtasks in Android (though many different will do). Best way to do anything on Android is to do it via Google services -IMHO. If you still insist on desktop app, not in-browser app, look here , here, or here

I recommend Tomdroid, have used it for maybe a year now and is a really handy way to sync your Tomboy notes to your phone. Its available in the Play store:

Note-taking application with online synchronization compatible with Tomboy A Tomboy client for Android.Tomboy is a desktop note-taking app using a wikiwiki approach and a simple user interface. NOTE: It is a READ-ONLY client for now.

As an alternative you could use Scratchpad for Google Chrome. Then install the Google Drive app for your phone. I know it is browser based, but this should work with Google Tasks and works well if you want to edit your notes on your phone, but I find it slow compared to Tomdroid (but as you can see Tomdroid might not have all the functionality you would like).

If your needs are simple (no recurring task, no much labeling) you can use Wunderlist. It has a Android client, web client and a Ubuntu client (available from the Software Center for 11.04 and 10.10).

For newer versions you will need some tricks to install it.

I use Fruux for my calendar and todo list.

It is not a native application for Ubuntu, as it is a web based solution however still provide a more intuitive way for managing your tasks and even share it with others.

Update I found out a native client at trello-desktop git repo and a description for its setup and an image of it from this blog. I tried it and it works fine with me.

Not the answer you're looking for? Browse other questions tagged software-recommendation android task-management or ask your own question.

11
Sync notes between Android phone and Ubuntu?
0
Simple messaging queue for inter-app communication over internet
7
Music Manager that can properly see ID3 ratings tags and synchronize with Android
12
How to sync clipboard between ubuntu desktop and android phone?
2
Sync highlight pdf between ubuntu and android
8
How do I sync music to my Android with Clementine?