I'll include a pic of what I mean to clarify: 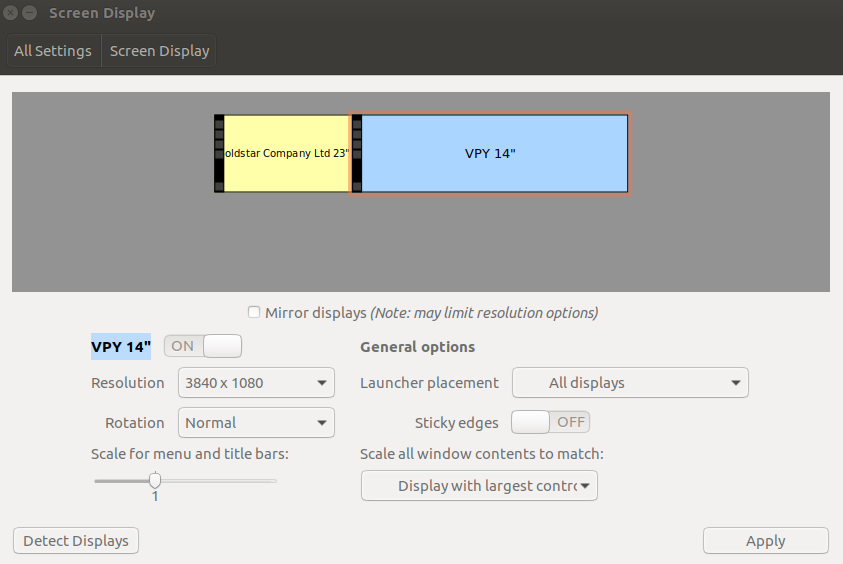 That very wide monitor on the right is actually two physical monitors. The graphics card just treats them as one monitor.

Obviously this is pretty annoying since I can only full-screen things on the far left monitor.

I've been googling for a solution to this for some time and have given up a few times. I tried using fakexrandr but that just made a total mess and I had to ssh in to fix that.

I've seen people suggest using tiled window managers for this, but that doesn't seem like a great solution.

It feels like telling the unity "treat this as two separate desktops" shouldn't be too hard. I've consistently failed to find a solution though.

As per the link you already visited and commented on here you need to start CompizConfig and select (CCSM->General->Display Settings->Outputs). Then as a user suggested here add these outputs to it and deselected "Detect Outputs":

His setup was three 1280x1024 monitors so you would need to adjust your settings accordingly.

Unfortunately I do not have three monitors and my dual monitor setup works perfectly so I have no need of CompizConfig nor can I test it for your environment.

You can try to do this with XRandR 1.5. I have managed to do this albeit with single monitor, maybe doing the steps just for the wider monitor will be enough.

To split the monitor do the following:

To persist the changes after reboot you would want to execute these commands when you login. You can do so by appending the commands at the end of your ~/.profile file.

Not the answer you're looking for? Browse other questions tagged unity nvidia multiple-monitors multiple-desktops or ask your own question.

2
Dual monitors on Unity, one above the other - how can I drag a window from top monitor to lower monitor (across central panel)?
4
Unable to log into Unity 3D session on Ubuntu 12.04 with NVidia graphics card
3
Need a PCIe desktop graphics card for dual-monitor
4
Run Unity on external monitor with Bumblebee
0
Gnome Desktop Flickers on One Monitor
1
Ubuntu 14.10 Aero snap in two screen horizontal setup?
2
Split large resolution into 2 desktops
1
Mouse flickering on one monitor
2
multiple 4k monitors on 16.04, issues