Can't boot without USB, grub-install and boot-repair both failed

Update #2: Might be because of HP's issue. Please see Rod's answer. This question remains unresolved.

Update: I did Boot-Repair and it didn't work. See the bottom section for details.

I just installed Ubuntu 16.04.2 LTS on a new 2017 HP EliteBook with a Ubuntu boot USB. I erased the Windows on it to just have Ubuntu. However the startup (see more info about the UEFI below) couldn't find an operating system unless I put the USB in.

So based on this answer I tried:

But I got the error:

Installing for i386-pc platform.
grub-install: error: failed to get canonical path of `aufs'.

Then I tried a suggestion from this answer which gave the same error.

Because I wanted to actually install it on my hard drive, which is identified by:

But I could not grep for boot in sudo fdisk -l.

I think the problem might be my root, /, is on aufs, based on this command:

Update: I tried boot-repair with the "install boot-repair in Ubuntu" option, got this paste2, shut down, took out my USB, turned on, and got:

What should I do now?

Here are the results of sudo efibootmgr and df in Try Ubuntu with USB plugged in. 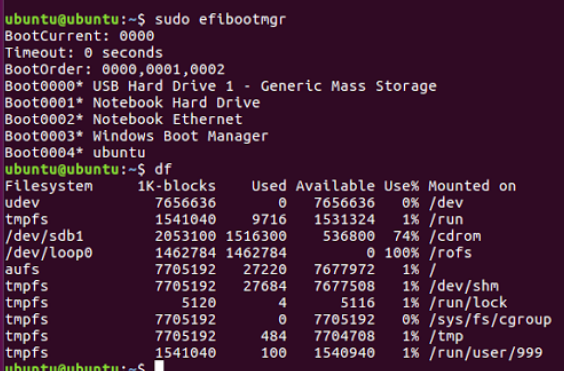 But I got the error:

Whether you know it or not, passing the /dev/sda device to grub-install implies installation of the BIOS-mode version of GRUB. (Of course, you may have passed that option in error.) Likewise, the response that GRUB is trying to install for the i386-pc platform also implies a BIOS-mode GRUB installation. I don't know offhand what the failed to get canonical path ofaufs'` message means. The BIOS-mode version of GRUB, though, is critical, because....

The presence of an EFI System Partition (ESP) implies that the disk is set up for booting in EFI mode, not in BIOS mode. (As a side note, you've clearly cut lines of output from your fdisk command. You should not do this when you're asking for help. These lines might be helpful in diagnosing your problem, although they're probably redundant in this specific case.)

The vast majority of new computers today ship configured to boot in EFI mode by default. You can enable BIOS/CSM/legacy-mode support in the firmware, and some Ubuntu and Linux installation instructions recommend doing so; however, in most cases this is bad advice. See my page on the subject for information on why. It's unclear if you've made these changes yourself; the apparent presence of the BIOS-mode version of GRUB in your Ubuntu installation suggests you've installed in BIOS mode; however, the disk partitioning suggests you've installed in EFI mode.

Since this is a new installation, my recommendation is to configure your firmware to boot only in EFI mode and to then install an EFI-mode boot loader. There are many ways to do this. The three easiest are:

From your Boot Repair output, there are some clues to the cause of the problem:

The Windows boot entry is still present there, too, which isn't surprising; however, the truly messed-up bit is the report that No BootOrder is set; firmware will attempt recovery. A working EFI relies on a variable called BootOrder to identify the order in which boot loaders will be run. This variable is absent on your computer. I've seen the same problem on a rather old HP 6470b laptop that I own, and no matter what I try, I've been unable to create this variable. In any event, the likely result is that the computer is trying to launch either the fallback boot loader (EFI/BOOT/bootx64.efi) or the Microsoft boot loader (EFI/Microsoft/Boot/bootmgfw.efi). If the boot loader launched is the original Microsoft boot loader, then it would flake out at this point because Windows is not installed. If you've copied something else to those files (knowingly or not), it might flake out if its support files aren't also present.

Since you say your computer is new, my first recommendation is to return the computer to the store for a refund and buy something else. The problem may be a sample defect (a bad NVRAM chip or the like), or it could be a bug in HP's firmware. If the former, a new version of the same computer might work; but if it's buggy firmware, a new computer will do nothing. (OTOH, if it's buggy firmware, there's a slim chance that a firmware update will fix the problem. Resetting the firmware options to their defaults might also help.) If you return the computer to the store for a refund, be sure to tell HP you did that, and why. Manufacturers will continue selling defective products unless they're made aware of the fact that they're doing so, and they take some pain (in the form of returns) for doing so.

If you refuse to get a non-broken computer, you must deal with it. The best way is to delete those Windows boot loader files from the ESP and to copy GRUB to the fallback filename of EFI/BOOT/bootx64.efi. (There's already a file in that location, but it's not clear if that's another copy of GRUB, another copy of the Windows boot loader, or something else.) You'll need to copy grub.cfg and perhaps other files from EFI/ubuntu to EFI/BOOT, too. If you use Boot Repair, there's an option on its Advanced page that will do this semi-automatically.

You can change the boot order using the -o option to efibootmgr, as in:

This example should keep the existing boot entries shown, but add the ubuntu entry to the front. In theory, this will make GRUB the default boot program, and everything should then start working. You can learn more about efibootmgr by typing man efibootmgr. (The same trick works for other commands; for instance, man ls will tell you about the ls command.)

That said, the fact that you had a non-existent BootOrder variable at the start makes me skeptical this will work; I suspect there's something flaky about your EFI that will cause it to fail. (Both the original Ubuntu installation and Boot Repair should have added the ubuntu entry to the start of the BootOrder variable, assuming they were run in EFI mode -- and the Boot Repair output you showed revealed no BIOS-mode boot loader on your disk, which implies they were run in EFI mode.)

There are two EFI System Partition(s), or partitions that fill that purpose, on your system, and I think you're getting them confused:

If you're booted with the installation disk, modifying files on your hard disk's ESP requires mounting the ESP and then modifying those files. You'd do something like this:

Note that typos (by me or by you) could make these commands fail to work as expected, and such a mistake could even make matters worse. If it works, this sequence of commands will copy Shim (which handles Secure Boot authentication) to the fallback filename of EFI/BOOT/bootx64.efi. Shim will then launch GRUB (grubx64.efi), which continues the boot process. If the efibootmgr -o command I presented earlier does not work, this sequence should get the system booting.

Beyond this, you're asking a lot of fairly basic questions, which is turning this question and its answers into a tangled web. I suggest you do some outside reading:

Once you understand some of these basics, you may get more out of the answers here -- but be aware that we've traveled down a couple of blind alleys because of incomplete initial information and incorrect guesses. If you still have problems after reading at least some of the preceding, I recommend asking fresh questions, or taking the discussion to the Ubuntu forums, which are better set up for back-and-forth discussions. (This site is intended for answering relatively straightforward questions, not carrying on extended discussions.)

Leading zeros are optional, but the above uses the entries as they are shown.
Edit^^^^

However, this is an HP, with some vendor specific tweaks to UEFI which break the standard setup -- basically adding a specific approved name the boot loader must have (Windows Boot Loader). Additionally, the filename of the bootloader must be bootmgfw.efi. efibootmgr may be used to rename the bootloader entry:

and just rename the /EFI/ubuntu/shimx64.efi to /EFI/ubuntu/bootmgfw.efi
edit VVVV
The rename is the file on the hard disk. Your df shows that the hard disk's EFI, sda1, is not mounted anywhere, so until you mount it, you cannot even see the /EFI directory which will appear where you mount it. Don't touch anything under the /cdrom directory.
edit ^^^^

That should work (search this site for HP UEFI problems, but I think that summarizes the solution).

Now under /mnt, you should see the EFI directory of the hard disk's sda1 partition. All modifications are done to these files /mnt/EFI/ubuntu/... and /mnt/EFI/Boot/...
Edit ^^^

That fallback bootloader may work independently of the nvram boot entry, and will keep your boot working if something decides to change the nvram boot list.

Awhile ago, I had a dual boot, secure boot enabled host with ubuntu/shim as the first nvram entry, and after creating an install media on a USB stick, the shimx64 entry was changed to grubx64.efi (which of course will not successfully boot with secure boot enabled). UEFI has other more serious problems when USB install media are created, so I eventually changed my default system to run in legacy mode.
What you found on the install media, the /cdrom/EFI/BOOT/BOOTx64.efi is actually the boot file for the USB. Don't alter it, since it works. Note that the BOOTx64.efi is just a copy of shimx64.efi. This is how the install media boots using its default bootloader in UEFI mode. This exact setup (well, case insensitive) is what you are putting on the hard disk as a fallback.

If sudo mount /dev/sda1 /mnt fails because "it's already mounted" then use df to see where, but that's odd if you didn't do it. It's not the /cdrom/EFI, that's a directory (but another source for bootx64.efi and grubx64.efi to put onto the hard disk). Possibly, the disks were re-enumerated, and the hard disk became sdb, leaving the sda to USB. See what df says, and change the mount to /dev/sdb1 if that's the case.

Not the answer you're looking for? Browse other questions tagged boot system-installation uefi hp boot-repair or ask your own question.

40
Which commands to convert a Ubuntu BIOS install to EFI/UEFI without boot-repair on single boot hardware?
2
I have two Ubuntu boot entries, and when I try to remove one, it automatically comes back
11
Unable to install Ubuntu on Acer Aspire ES1-533
3
Installed ubuntu 16.04 on Dell erasing windows 10, no booting device found