No installation type when Dualboot Ubuntu 16.04 and Windows 10 (SSD & UEFI)

I know this topic is all over the web, but none of the solution I've found solved my problem.

I configure a USB drive to a .iso with the 64bit version of Ubuntu 16.04 LTS. I disabled fastboot, my ssd drive is in "basic mode" and I shrunk the Windows volume. There is now, 6 different parts in my SSD :

I then reboot holding f12 to boot from the USB key, I then choose the option "install ubuntu".

1) I choose English then hit Continue

3) I don't tick anything in preparing to install ubuntu.

And then I would expect to get the window : 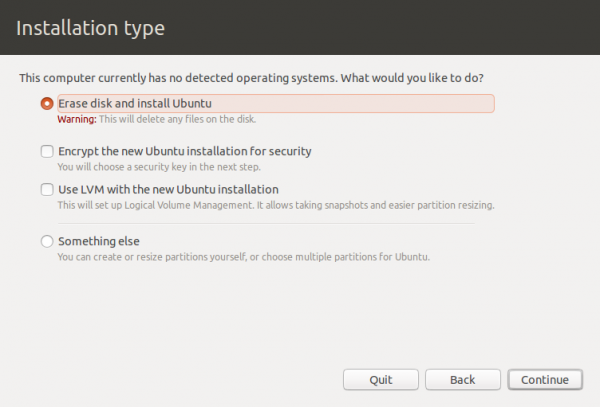 But I don't. I directly get to the second window "Installation type" with the list of device on which I could install ubuntu. And there I only got one device named /dev/sda (which by the way is the same name as the "device for boot loader installation" : /dev/sda Kingston DT, which I found weird). I expected to see the 6 disk partitions I mentioned earlier.

It is now a day I am on this question... Does anyone know what can I do from there ? Thanks a lot.

I directly get to the second window "Installation type" with the list of device on which I could install ubuntu. And there I only got one device named /dev/sda (which by the way is the same name as the "device for boot loader installation" : /dev/sda Kingston DT, which I found weird). I expected to see the 6 disk partitions I mentioned earlier.

The /dev/sda device you're seeing sounds like your USB flash drive, on which the Ubuntu installer itself resides. The symptoms you're reporting are usually the result of Ubuntu being unable to read your hard disk, which in turn usually means that the disk type or disk controller is not supported by the kernel you're using. If I'm right, there are several options for how to proceed:

There is no need of EFI partition as Ubuntu16.0.4 supports legacy mode also. When we install Windows 10 then it usually takes 2 drives. First one is of 500mb to boot and second one contains main windows files. After installing windows 10 create 3rd drive (file system ext4) for Ubuntu next to windows drive. Ubuntu takes about 10 gb to install. So I think it will be wise decision to give it more than 20 gb. After this we create 4th drive (Linux swap) for swapping which is mandatory for hibernating and increasing performance. Its size is dependent on ram and should be more than the size of total ram.

Now when you will run ISO, DVD or USB of Ubuntu installation in legacy mode it will give you first option to install Ubuntu with windows 10 to create dual boot. As you will enter in that option, a clear message will appear only 3rd and 4th drive will be reformatted. Go next, next and install Ubuntu. At the end you will see Dual boot system has been created.

Use "Gparted partition editor" to modify partitions which is already present in "Test mode of Ubuntu" (Live Cd mode) in same setup which you will run to install it.

Whenever I create Dual-Boot Windows 10 and Ubuntu 16.04 systems here is what I do. This might be a problem for you if you need to preserve the Windows 10 partition at all. You also need to have an iso image of Windows 10 on a bootable USB.

Not the answer you're looking for? Browse other questions tagged dual-boot partitioning uefi or ask your own question.

103
"physical block size is 2048 bytes, but Linux says it is 512" when formatting USB - How to create a bootable USB without this error
117
How to get GRUB to be the default bootloader instead of Windows Boot Manager on a UEFI laptop?
1
No root filesystem during 16.04 install from USB