How can I set a shortcut key to open the currently selected file in nautilus?

I have set a keyboard shortcut to run the script below to open the selected Nautilus file, in specified application (gimp).

It never picks up the selected file in the nautilus window properly however.

Is there a way to do this?

NOTE: in this answer there are two solutions, each with its own benefits. Users are encouraged to find out which one works best for their specific case.

Nautilus by itself doesn't offer a way to define custom keyboard shortcuts and their actions. This is the main reason why the scripts you tried have failed. $NAUTILUS_SCRIPT_SELECTED_FILE_PATHS can only be used via right click submenu. But we can exploit something else to achieve the desired result - shortcuts defined in the settings and system clipboard.

Nautilus is built in something known as Gtk toolkit. It is an extensive library for creating graphic applications, and among other things it has utilities for interfacing with system clipboard. Nautilus, being a file manager, is special in the fact that it outputs a list of URIs ( in the form file:///home/user/Pictures/encoded%image%name.png ) to clipboard (which isn't a well known fact to most users, and I've learned quite recently as well). Apparently this is the way GUI file-managers copy files.

We can exploit that fact by copying the URI of the file (or to be exact, the list of URI's; even if there's just one, it defaults to a list). Then we can pass that list to gimp. The two solutions presented below operate exactly on that idea.

I personally consider solution #1 as preferred one. It relies on manually pressing copy shortcut first, and then script shortcut - that's two keyboard shortcuts - but it has advantage in having less dependencies. It's a more manual approach , but fairly decent. It uses os.execlp call, which will replace script's process with Gimp, thus acting as merely a springboard for Gimp. It's a frequent practice in scripting and system programming to use exec family of functions

The second solution was written because Jacob Vlijm mentioned in the comments that for him the execlp function didn't work, for whatever reason. I find this very strange because the execlp belong to standard os module for python , which is one of the modules installed default. In addition, subprocess.Popen() defaults to exec() family of functions; from subprocess documentation:

On POSIX, with shell=False (default): In this case, the Popen class uses os.execvp() to execute the child program. args should normally be a sequence. A string will be treated as a sequence with the string as the only item (the program to execute).

Thus, it doesn't seem like an issue with a function itself, but with user's system. Nevertheless, I wrote second script. That one uses subprocess module and relies on xdotool, which will basically automate pressing Ctrl+C shortcut for you, and then launch Gimp. I personally don't like this one as much, since it requires additional item to be installed, but it has advantage of needing just one keyboard shortcut.

The idea, however, is the same. We still use Gtk tools to query clipboard contents and in each case, scripts must be bound to a shortcut.

Usage: select file and press Ctrl+C to copy file first, then press the shortcut you've assigned to this script. execlp function will replace the script's process with gimp.

Usage for this script is simpler: select file(s) in Nautilus and press keyboard shortcut. NOTE: you must have xdotool installed for this to work, use sudo apt-get install xdotool.

Setting up the shortcut

In both cases, you need to have script linked to a shortcut. Open System Settings -> Keyboard -> Shortcuts -> Custom. Click the + button. Give full (!) path to file as command. For example, /home/User_Name/bin/clipboard_launch.py 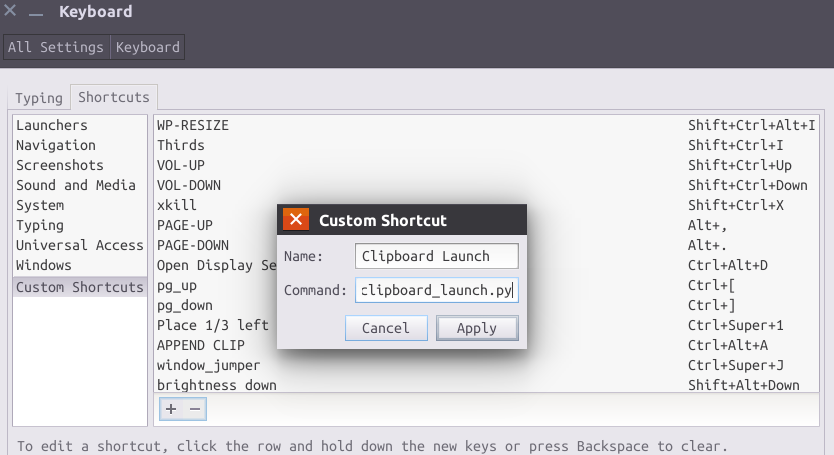 Assign the shortcut to be something sensible. For example, since we're calling Gimp, I've assigned my script to Ctrl+Super+G.

Opening selected file in a specific application from a shortcut

Inspired by the concept of @Serg (+1), a different approach on how to implement it:

That's it. Now select a valid document and press the shortcut key. The file will open in Gimp.

Not the answer you're looking for? Browse other questions tagged scripts nautilus gimp nautilus-script or ask your own question.

10
How can I assign keyboard shortcut for nautilus scripts?
2
remove the preceding “file://” when pasting in gnome terminal

2
Nautilus won't browse my USB hard drive unless I double click it twice
5
Unity: Nautilus folder opens in background
3
HTML Files not opening in browser
4
How to set default program to open specific file type
2
Unable to navigate to the files/folders pane in Nautilus with keyboard
0
How to change the application when opening a folder on the desktop