Help! Linux *does* choke on my RAM

First off, I know that the memory usage as displayed in the System Monitor on Ubuntu isn't definitive. I read all the stuff like this. But consider this:

Ever since this happened I keep the System Monitor open, and every time the system freezes is because the memory usage get's up to 99.99%.

I've tried to use commands such as these sync && echo 3 | sudo tee /proc/sys/vm/drop_caches and extensions for Chrome to better manage processes and memory usage. Most of the time I have 5 windows running:

As I said, I keep a close eye on the memory usage and reboot from time to time when I notice the memory is > 90%, but it happens often that a process (mostly Chrome) has to pull some weight unexpectedly and if that happens, I can sigh, force-quit my machine, and start it again.

Over the course of the day the memory usage seems to grow and grow, and the only way to clear it again is to reboot. On boot, memory usage is usually 40~45% (+- 3,5GiB). At this time I have 4 tabs in chrome, a terminal window, Nylas in the background and spotify, and memory is at 5.5GiB. I already feel the tension for when it's about to choke up again.

The Ubuntu install is pretty clean and fresh; installed it out of the box and didn't do any crazy stuff with it internally; just using it as a regular user.

Now I don't know if this is due the fact that it runs on a MBP and it isn't optimized for it, or that I could tweak the OS to run better on it (i.e. I don't seem to have any swap available), but I think it would be an idea to limit memory usage to say 95% the same way the battery doesn't charge over 90%; to keep from hitting the 100%.

But I'm no power user. I'm also not afraid to dive in the system and tweak stuff (that's why I wanted to use Ubuntu anyway), but at this point I'm not sure where to look for a solution, if there is one anyway. I've read about launching certain processes (like the browser) in containers and limiting those to a certain amount of memory, but I've also read that that is a 'plain stupid idea' because 'it doesn't work that way'.

So, what do I do? I've read these three questions, but no satisfying answer yet. 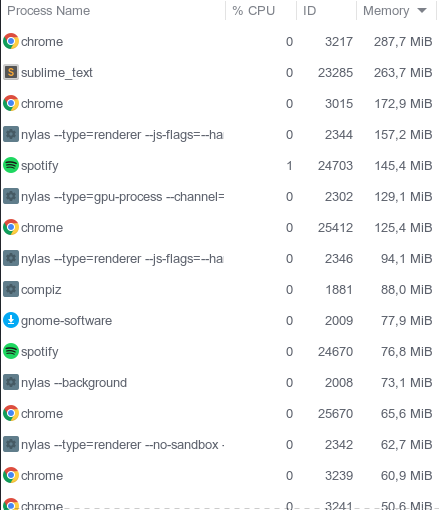 Edit: At Duncans advise, here is the list of start up processes. As far as I can tell there is nothing too weird about it.

Browse other questions tagged 16.04 ram freeze memory-usage or ask your own question.

53
How do I clean or disable the memory cache?
3
Hard freezes when RAM is exceeding
0
responsiveness drops drastically when RAM get's full after upgrading from 13.04

3
Where is my ram?
14
Warning when available RAM approaches zero
3
Which processes with daemon are unnecessary?
1
Why does available physical memory appear to increase after boot?
7
How to avoid out of memory to hang the system