I use the integrated backup service of Ubuntu 16.04/Unity provided by deja dup/duplicity. Whenever a backup is performed, my system becomes very slow (annoying but still usable) due to the complex diffing/compressing/encryption mechanism used.

Is there a way to set a nice value for the processes that are started by Unity (deja dup/duplicity/gpg)? Or is there another way to improve responsiveness of the system while a backup is performed?

Edit /etc/xdg/autostart/deja-dup-monitor.desktop and prepend settings to the Exec value, e.g.

The nice value is set to deja-dup-monitor and all the processes it spawns (deja-dup/duplicity/gpg).

Changing these values improved responsiveness of my system dramatically, even if the overall load is still between 30 and 90 % (all cores summed up) during a backup.

Note: this does not work when you hit the "Backup now" button in the Ubuntu system settings.

Don't launch via Unity. Launch via the CLI of course you'll have to review the manual in order to duplicate the settings you are using in the GUI.

nice -19 Preceeding your duplicity command line will launch the process with a nice value of 19 (which is as nice as it gets) Or alternately find the processes in top and renice them there.

If and when this fails to provide the results you are looking for we will have to consider an alternative.

setup a cron job to or use scheduled tasks as noted here to run your backup when you are sleeping to avoid impacting the performance of your session when you are using the system. After all computers were invented to do work for us so that we can occupy ourselves with other things (like sleeping)

Or wait for the developers to fulfill this item on the wish list.

There doesn't appear to be a script that launches Dejadup instead there's apparently something called deja-dup-monitor that launches when you log into your session. Unfortunately the dconf settings used by dejadup don't include any niceness whatsoever. As much as I know this isn't the answer you want, I have to conclude that it's correct.

Note: My tests at this moment on a lowly Intel I3 backing up to a USB2 drive didn't seem to experience the lag you are experiencing. I know that in many cases an Intel Dual Core will outperform an AMD quad core. Perhaps this is why you feel that your system is laggy while backing up or the problem could also be related to IOWAIT. You might find the output from System Load Indicator contained in the indicator-multiload package Will help you determine whether you are pinning your processors capabilities or experiencing High IOwait percentages. It's easily installable though the Software Center and rides on the top menu bar where you can see at a glance what is going on with your system. See below: 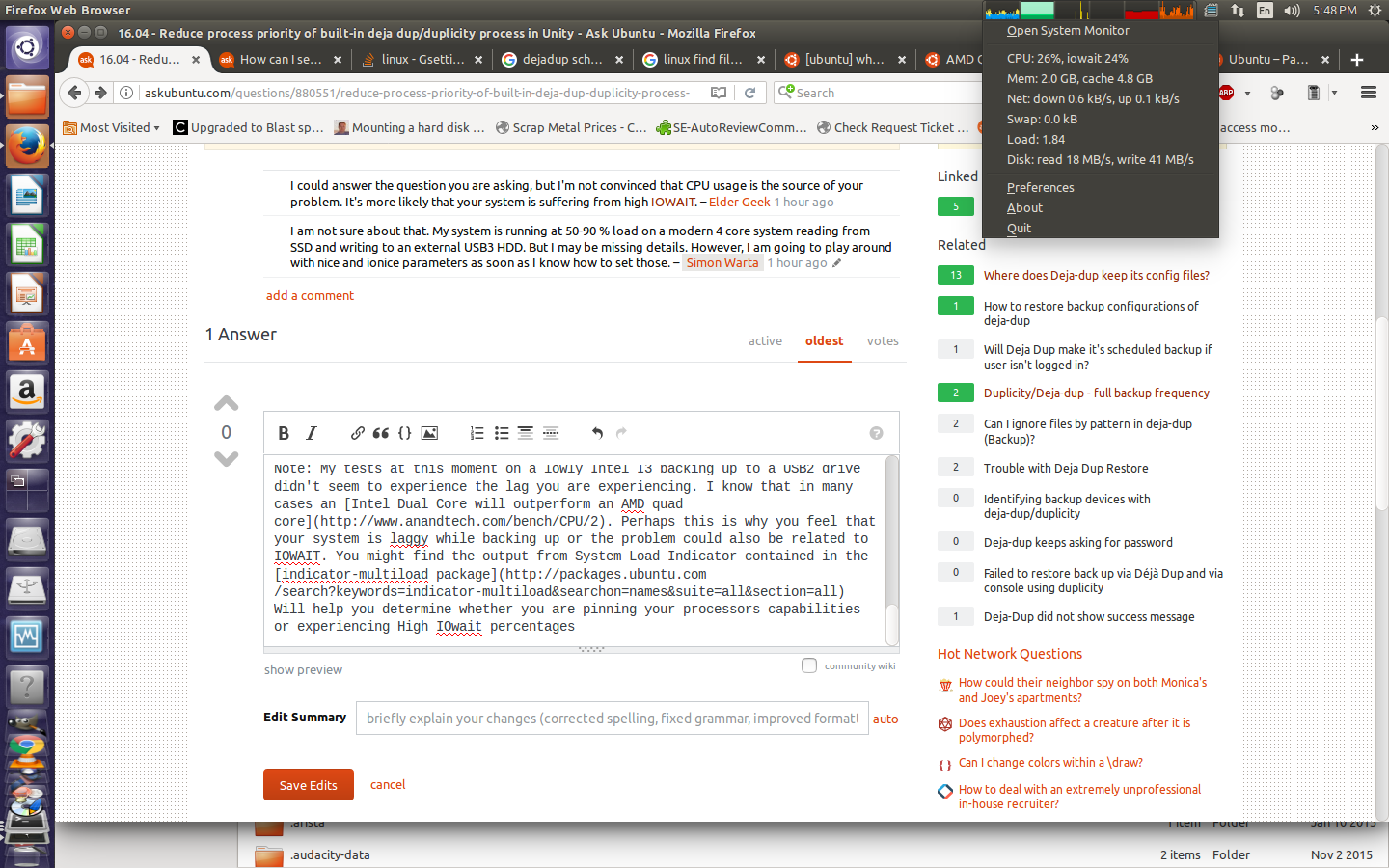 Not the answer you're looking for? Browse other questions tagged 16.04 unity backup deja-dup duplicity or ask your own question.

21
How can I set up hourly Deja-Dup backups?
7
Setup CRON weekly backup
0
Backup before shutdown?