Should dual booting work from a 4TB HDD?

The lab I work for recently got a new Dell Precision Tower 5810. We have a 4TB HDD in there in addition to the smaller one it traditionally comes with. Because the larger institution has standardized IT support, we cannot mess with the smaller drive and thus must use the 4TB for booting Ubuntu. I am trying to install Ubuntu 14.04 from a LiveCD which we have used in the past. Previous installations were successful on other computers of the same product name. The largest differences between the new computer and the old ones, as far as I know at the moment, is that the new computer has next-version processors and 2x the additional HDD space.

When I install Ubuntu on the HDD, it claims to be successful. Furthermore Windows' disk manager, although unable to identify the Ubuntu partitions, acknowledges that something is there. However, when I try to boot the computer from the 4TB drive, it insists it cannot find a bootloader.

I have reformatted the drive and reinstalled Ubuntu but that does not help. While reinstalling Ubuntu, I have also tried putting it in different sections on the HDD (ex. beginning versus end of the drive). I have also used the LiveCD to attempt a purge of Grub; no success there.

Because of this, I am starting to think that the computer just isn't able to boot from a 4TB drive. However, I have yet to find documentation to support this idea.

Does anyone have any ideas? Please keep in mind, I don't have much depth when it comes to the technical aspects of computers.

Here is the boot info for the initial state of the issue. http://paste.ubuntu.com/23920806

I thought the issue might be were Grub was installed so I changed it and got the following. http://paste.ubuntu.com/23921965

I think I might have found a post about a similar problem, but there is no answer. Boot-Repair: "core.img can not be found"

So, I tried to do this with a 2TB drive just like we have in the past. As can be seen at the following boot info page, it does not appear to have the same missing image file issue. However, the computer still will not boot from it. Please note that in this case, the 2TB drive is in the new computer so it is sdb not sdc. http://paste.ubuntu.com/23955960/

So, it was brought to my attention that using a GPT partitioned drive for Grub requires a dedicated Grub partition. I was previously unaware of this because that particular information appears as a short paragraph in the Grub installation instructions (https://help.ubuntu.com/community/Grub2/Installing#BIOS.2FGPT_Notes) but is not in the general Ubuntu installation instructions. At this point, I have put the 4TB drive back into the new computer and have resumed attempts to install Ubuntu on it. However, despite following the online instructions to the best of my knowledge, Grub still does not work. Based on the boot info, the previous issue of a missing image file appears to have re-emerged. The following boot info is from after an attempt to purge and reinstall Grub. The screenshot shows what GParted displays when examining the 4TB drive. When installing Grub, during both Ubuntu installation and Grub reinstallation, I select sdb as the installation location for Grub. 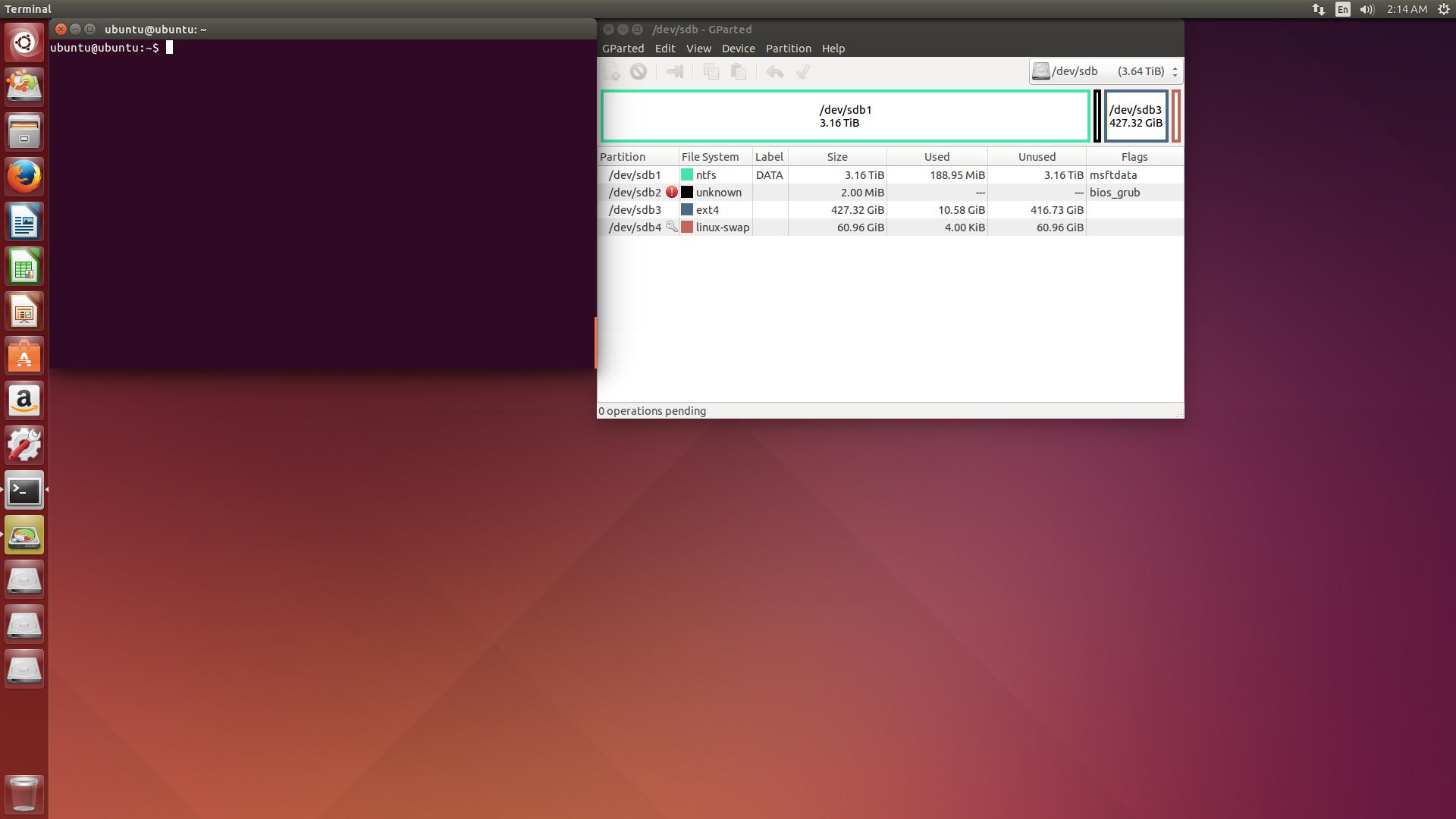 As requested by oldfred, I have checked the Secure Boot settings. I am working on Windows 7 Enterprise so msinfo32 does not display this status. However, I was able to check by accessing the boot settings upon booting the computer. If anyone knows a simpler method, feel free to share. Regardless, below are two images showing the current Secure Boot configuration for the computer in question. 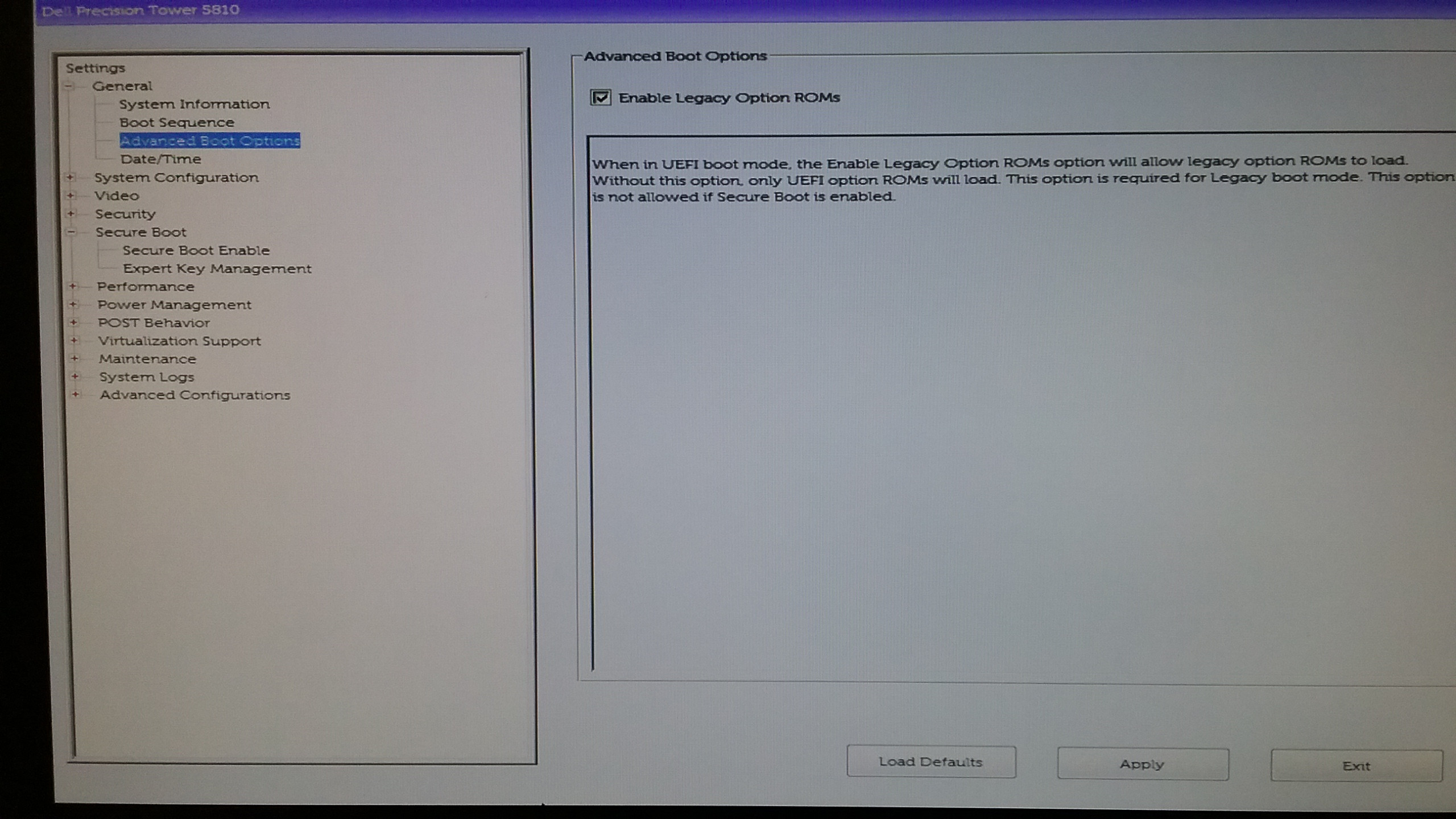 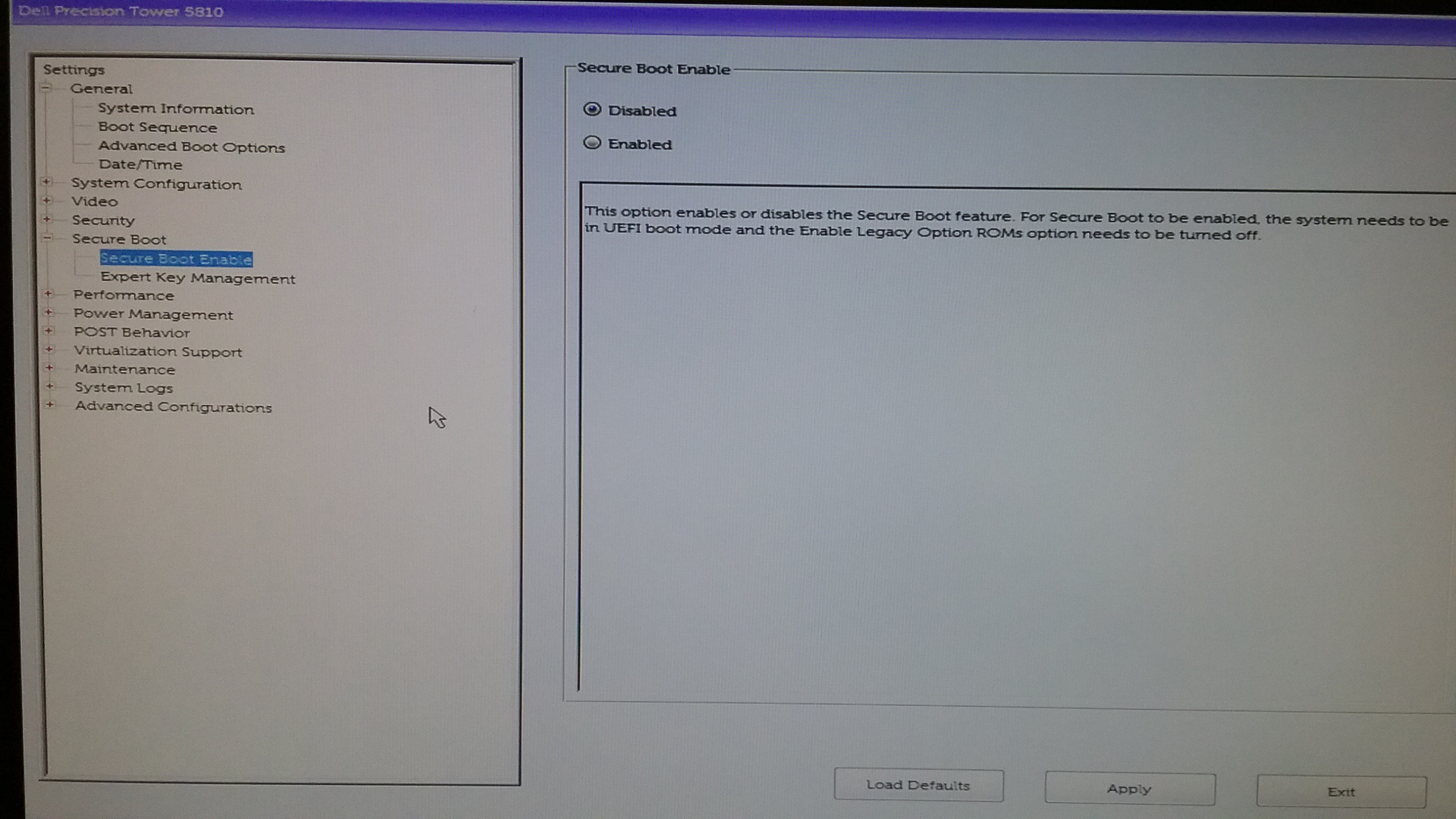 Per ubfan1's suggestion (and apparent "fine print" at https://help.ubuntu.com/community/DiskSpace#BIOS-Boot_or_EFI_partition_.28required_on_GPT_disks.29), I have moved the bios_grub partition to the front of the disk. However, it still doesn't boot.

Per ubfan1's suggestion (and https://help.ubuntu.com/community/DiskSpace#Separate_.2Fboot_.28sometimes_required.29), I created a separate boot partition. I then reinstalled Ubuntu but it still will not boot.

I have used Boot-Repair to purge and reinstall Grub but it still won't boot.

Per oldfred's comment, I have tried to add the "boot" flag to a partition. I have done so in the following configurations without success.

Someone (not on here) suggested wiping the entire drive. I did so using "sudo dd if=/dev/zero of=/dev/sdb". I then set the drive to use GPT. I tried installing Ubuntu and I am having the same issue as the previous attempt.

According to oldfred from his post post above, the 4 tb hard drive must be GPT partitioned. This is actually incorrect. If the OP partitions the 4 tb hard drive as two 2 terabyte hard drives, then he can access them as MBR partition. https://superuser.com/questions/368173/what-is-the-maximum-number-of-partitions-that-can-be-made-on-a-hard-drive

Forgive me if I missed something in the discussion, but did you try putting the grub-bios partition first? I see it second, but still 3T into the disk. Try the below GPT partitioning:

I use a legacy Win10 main disk, but have a GPT second disk, to which I did a legacy install, and later added UEFI boot capability by populating the ESP on the second disk. Things to check, that you can actually boot from the sdc disk.

A 1M size for the bios-grub would be sufficient, but then maybe the 2M suggestion is to keep alignment. Check your disk mfg recommendations. Consider the ESP planning for the future, or someone's (arbitrary) decision that UEFI is the way to go. Make it smaller if space is an issue, Ubuntu's bootloaders can fix in 6m, including a backup copy in /EFI/Boot. You don't have to set anything up, just allocate the partition, and leave it empty.

Not the answer you're looking for? Browse other questions tagged 14.04 dual-boot grub2 windows-7 or ask your own question.