Printer jobs can not be stopped

Recently I had one of the most frustrating experiences with my printer.

I sent a some print jobs to my Canon Pixus iP3100 printer, but then realized there was a problem with the layout, and so I wanted to kill the print jobs. I went to this interface: 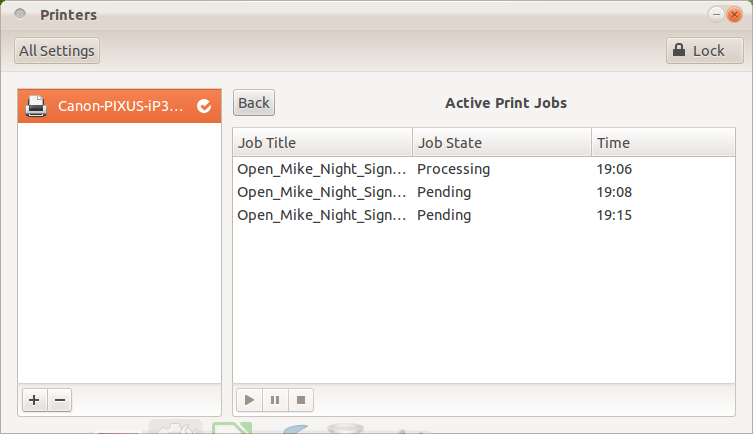 However, pressing the stop button, marked with the square, did nothing.

I tried everything I could think of to kill the print jobs. I tried restarting the printer. I rebooted the computer. I hit "reset" on the printer. I tried killing any printer related tasks in the task manager.

No matter what I did, though, the same jobs were in the queue, and the only way in the end that I was able to get past them was to have them all run through to the end.

Is this a bug, or is there some other aspect to this that I am missing?

Open the terminal and type lprm. This will clear the print queue and thus stop the printing.

"lpq -a" will show you jobs on all printers (without the -a it will only show jobs on the default printer).

The third field of the output will be the job number, which you can use with "lprm" to cancel a specific job.

Here's an example. PDF is my default printer, but not the one I sent my jobs to:

[$] lpq
PDF is ready no entries

lprm did not work for me - there must be something strange about my Ubuntu install.

However, typing cancel -a in a terminal worked fine.

What happens if you hit that "Lock" button on the upper right, so you can unlock it? I don't know - my printer controls are different - but I'm guessing that might give you access so you can kill jobs.

Not the answer you're looking for? Browse other questions tagged 11.10 printing canon or ask your own question.