How to find out which is the ubuntu partition?

I have a dual boot system with ubuntu and Windows 7. Before installing Ubuntu, I tried installing Debian, and In the way I made some useless partitions of the disk(In the end, I didn't install it) Then I tried Ubuntu, and realized that the setup gives you the option of keeping windows. Back then, I didn't care about the useless partitions I had made, but now I'm running out of disk space, so I was wondering how to get back those gigabytes. I installed a program called EaseuS Partition(in Windows) to do this, which shows me the following: 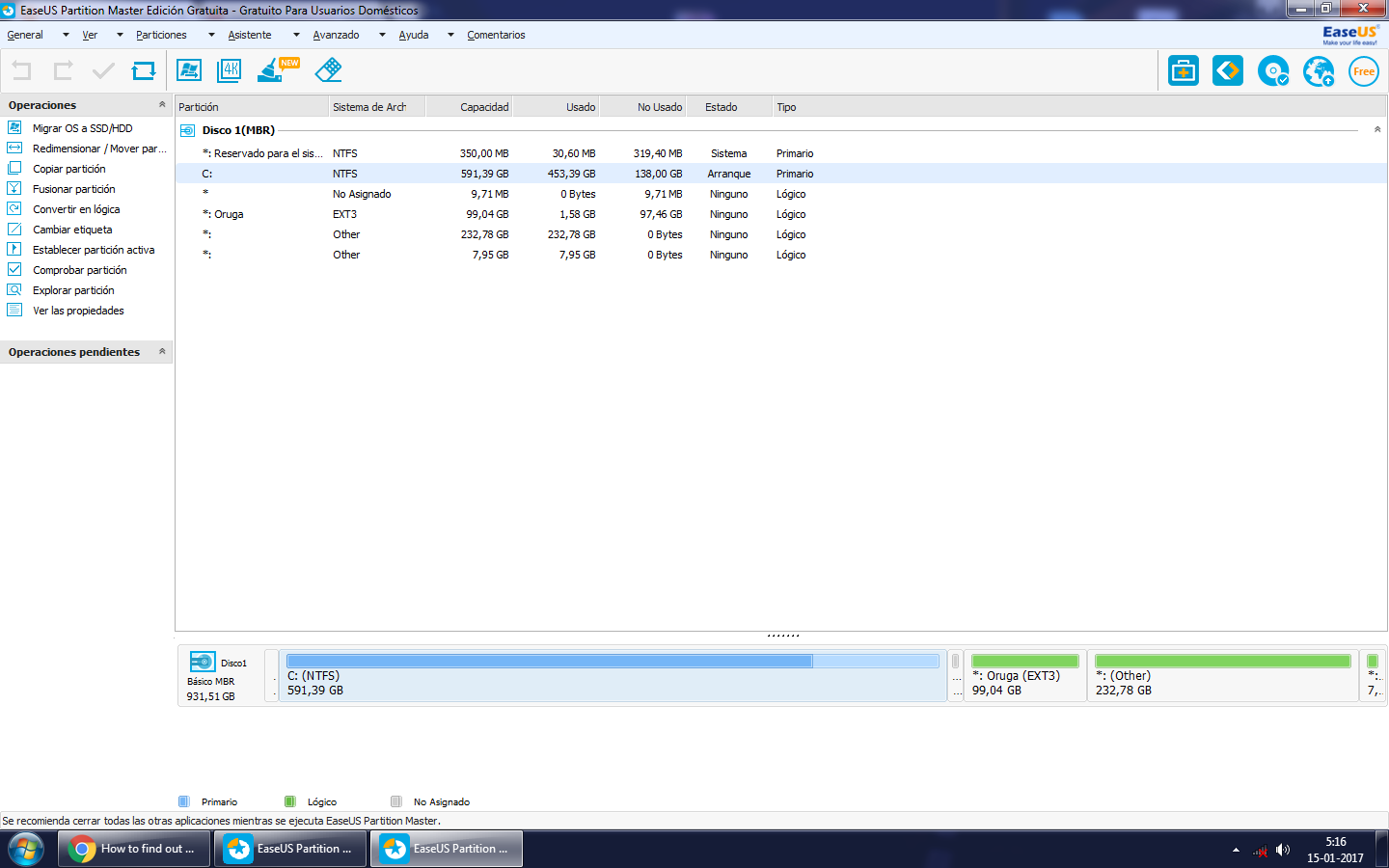 I'm pretty sure that Windows is the one with 591 GB. Then I entered Ubuntu and looked at System Monitor, which tells me I have 240 GB of disk avalaible, of which 30 GB are used. Here is the problem: According to the image, I have a partition of 232 GB, one of 99 and one of 8 GB. So doing the math, is it possible that the one with 232 together with the one of 8 GB make the ubuntu one? I even have another theory: Is it possible ubuntu and all its content are inside the 591 GB? This is because in windows almost everything which occupies a great amount of space are games and the things in the desktop. I check them and they sum 388 GB, and adding 240, it gives 628, which is somewhat close to 591... I don't know.. How can I know?

Edit: Another curious thing is why it says that all the space of the 232 are used.

Edit2: I get this with Gparted 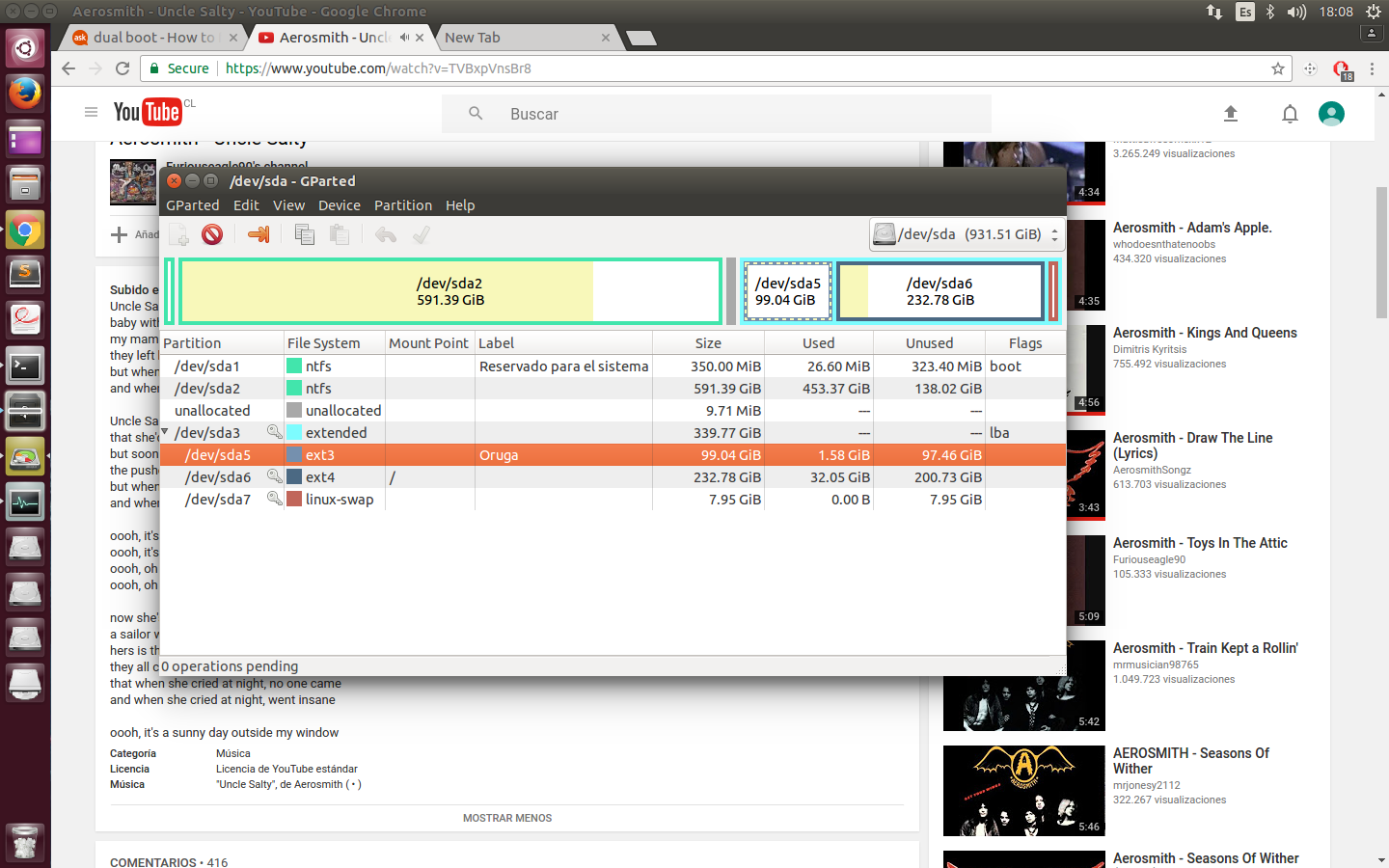 I was a little mistaken, System Monitor says that the free space is 245,9 GB and used is 30,4 GB. Also says its type is ext4. There is only one ext4, but numbers don't fit with Gparted.. On the other hand,I can open Oruga partition from the Launcher, but it has nothing inside, so I don't know why Gparted shows that it has 1,58 GB used.

And linux-swap, is it kinda a default partition? I don't remember haven't created that name...

Don't use windows tools for other operating systems. Use gParted from a live session or use it from within Ubuntu. That program will show labels for all filesystems it knows (that is Windows, Mac OS, Linux and Unix). Windows does not recognize foreign (those that are not made by mircosoft ...) filesystems. It probably is seeing that 232 as used because it is a foreign filesystem.

You can though assume anything that is not marked NTFS or FAT is not Windows and therefor likely to be Linux.

The one marked as EXT3 is Linux related. The patitions marked "other" are likely also Linux.

See how much more clear gParted shows the info? :-)

Not the answer you're looking for? Browse other questions tagged dual-boot partitioning disk-management or ask your own question.

0
My Ubuntu drive is running out of space, how to fix, something is wrong
3
bios_grub partition in the way of resizing Ubuntu partition
1
GParted - Recursive partition on /dev/sda
3
Cannot extend a partition located AFTER the unallocated space
1
Unable to Expand Ubuntu Partition using Gparted Live USB
4
Can I safely resize Windows 10 system partition from Ubuntu?